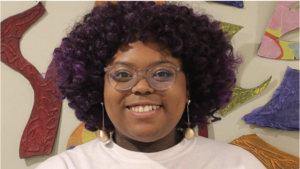 In her ongoing exhibit Enigma: Reactions to Racism at Urbano in Jamaica Plain, Haitian-American artist and educator Chanel Thervil aims to explore racism in Boston from the black millennial perspective. Through a mixed media installation of portraits, abstract works, and interviews, Enigma works to start a dialogue about racism while dispelling some of the stigma surrounding it. In a recent conversation with DigBoston, Thervil explained how her newest project will give a much-needed platform to voices in the city that are often silenced by stereotypes and lack of representation.

So much of your work focuses on racism and the American black identity. What pushed you to create art that is so politically and socially minded?

Well, I didn’t have my first experience going to a museum until I was a teenager. I was 15 or 16 the first time I went to a museum in New York. What stuck with me is that I was an anomaly. I didn’t see people that looked me anywhere. I didn’t see people that looked like me in any of the artwork. I didn’t see people that looked like me as speakers in the museum. It was just very confusing. I remember thinking, “Huh, wonder why there aren’t more people of color in this space.” It’s a place that [is] supposed to be where things are honored. I got the assumption that museums were institutions that hold the highlights of culture, like culture’s greatest hits, and it was strange to me that there weren’t people like me represented on either side of the canvas. It was like, “Whoa, what’s going on here?” I feel like that has been the major fuel for my work that I do, not just as an artist but also as an educator. Just making sure that my students know that there are people of color who have always been doing great things and making art.

Did the move from a city like New York to Boston have any influence on your work?

I think when I moved to Boston it was a big culture shock. It’s not to say that New York is a perfect city and that racism doesn’t exist there, because that’s just not the reality, but there’s definitely more explicitness in New York City in terms of understanding where you are and where you’re not welcome. I think Boston kind of hides behind the guise of liberalism and the city is quick to say, “Oh, we’re not racist and everything is fine! Everyone is welcome!” And then, you’re in different spaces with people who are different than you and you get treated poorly. So in that way, it’s a bit confusing. In regard to my art practice, being multidisciplinary is something that has definitely crossed over into Boston. I experiment with multimedia and I’m always looking for more ways to express my ideas. That’s one way the New York city influence is still very prevalent in my work.

What was the inspiration behind your upcoming exhibition Enigma: Reactions to Racism?

This exhibition came from the things that I was just encountering here in Boston. So many people don’t realize that I have a full-time job! I’m the program manager for an art nonprofit called Art Connection, and before I got the full-time position that I have, I had worked with a number of nonprofit and art institutions in Boston. As I navigated these spaces, it was rare that I found people who looked like me on the staff side. And when I did find people who looked like me, it was always a one-off. Like, “Oh my gosh, there’s another person of color here!” I think because of that hunger to be accepted in these spaces and having all of these experiences in me, I started networking and meeting more people of color in nonprofit spaces. It’s kind of like being a magical unicorn in that way, like being the one person of color in the nonprofit space. It’s a very activating experience, and there are a lot of instances where you’re kind of questioning the situation like, “Did that really just happen? Did that person really just say that in my presence?”

I think definitely the subtext of the show is kind of unifying some of those experiences that seem to isolate us. So, all of the portraits of people that are featured in this exhibition are black Boston-based millennials, and many of them either currently work in nonprofit spaces or have done that for most of their professional career. Again, just honoring the average person. That’s something I learned through talking with other people of color in the nonprofit sector, that we’re often the unseen, unheard entity in the room. I thought that this was a good way to ensure that the whole room could see us.

Why did you choose to focus on the millennial voice? Why is it so important?

I’ve had an older person say to me once, “You know, I thought racism would be over by the time you guys came around.” I remember hearing that and thinking, “That is such a strange thing to say!” And like, you’re not dead! Just because you don’t consider yourself to be young doesn’t mean that you now have no stake in the game and you have no accountability or responsibility to make the world a better place. That has been another thing that’s interesting about being a millennial in particular. I guess it’s a little bittersweet because, on the one hand, it’s great that older generations are hopeful for us to do this work, but also it’s a lot of pressure on us to not perpetuate certain systems and not be a part of certain systems that they want to try and disrupt. So many of the institutions that helped generations before us are kind of crumbling—they’re gone. I would say millennials are really innovative and creative, and we’re also people who kind of expect to work and do multiple things in order to survive. Because we are hypersensitive to the fact that things can always change, we’re very good at adapting and shifting, and also just trying new things and accepting nontraditional paths for success and stability. There’s definitely creativity that comes out of that resilience.

I think what’s unique about the millennial perspective is that we’re good at utilizing language to express emotions in ways that generations before us were not as good at. I would also say that we are into sarcasm and irony, and there’s a particular kind of humor that millennials have that’s a little on the dark side. It’s because we’re aware of ourselves. We can see a lot of the negative things that we are experiencing, but at the same time, we have to get through it. So, we make a lot of sarcastic jokes and a lot of memes about things that are stressful as a way to kind of cope with it or make it bearable enough to deal with. That’s something that’s definitely very unique to millennials—how they deal with pain, and how they can push forward despite all of the uncertainty around them.

Why did you feel that portraits are the best way to showcase the millennial voice?

Millennials are kind of the generation that everyone likes to kind of crap on. I think it’s all the more necessary to show that we’re here, and we’re smart, and we’re present, capable, and making our best efforts to deal with the cards we are dealt. I think it’s hard for people who aren’t millennials to understand that because we go about things differently than they do. To be a millennial is to be a chameleon. We don’t really have that false sense of security. The country can change, student loan laws can change, technology can change, the economy can crash. We are so accustomed to drastic shifts that we just adapt and adapt again. We are definitely more fearless about other generations about forging our own paths. At the same time, being in Boston as a millennial, and typically the youngest person in the room in my professional settings and sometimes also the only person of color, it can be really challenging just to have people address you with respect, or to be credited for your work. Or to be paid what you deserve to be paid for your skill set. Boston is a place that’s very heavily rooted in tradition, and these traditions are sometimes detrimental to the people living in the now. I think that black millennials in Boston especially are just doing their best to carve out a space for themselves.

As an artist, I think a lot of what I do with my portrait work especially is about honoring the average person and making it clear that you don’t have to be someone exceptional, like a celebrity or a civil rights leader or a [neuro]surgeon, to have a portrait made of you. Normal people are worthy of being honored, too!

How is Enigma different than your other exhibitions?

What’s very different about this exhibition from my other work is that it’s a blend of the portrait work that I do and the abstract installation things that I’ve done in the past. That’s something that’s really unique. While there are abstract elements in the portraits that I’ve previously made, they were never as bold or explicit as they are going to be in this show. There’s also an interesting audio component in Enigma that I’m really excited about. I start the process of making portraits by photographing and interviewing people. So for this exhibition, in particular, a couple of the folks that are portrayed agreed to let me record them. I’m going to include audio files of their perspectives on confusing things about racism and their experiences with it in Boston.

When Urbano selected me as their artist in residence, part of why I was really excited was just because of the mission of the organization. They’re all about empowering urban youth and artists through art and social justice. I just thought it was the perfect space for me to promote this idea that I’ve had for such a long time. I thought it would be a good way that art can be used to talk about uncomfortable things and also be used to talk about questions that we don’t have answers to yet.

What are you hoping the city takes away from Enigma?

I hope that they reflect, and I hope that this reflection then becomes action. I can’t control what people take away from the exhibit, but ideally, I would like for people to see it as something that makes them ask more questions and reflect, and maybe do or say something different in the future.

This piece first appeared at digboston on 02/11/2019 and is re-posted here with the express permission of that fine publication.

Ocean Wong is an artist, illustrator, and photographer from Hong Kong now living in Boston. Ocean and I caught up via phone…

WHAT IS BOSTON WITHOUT THE HARRIET TUBMAN HOUSE?

Examining the city’s continuing legacy of racism and gentrification