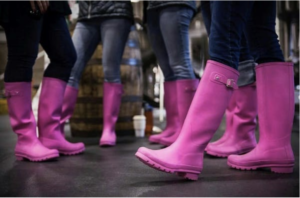 The beer business is male-dominated, but it wasn’t always this way. In fact, brewing was a woman’s gig for the vast majority of the history of alcoholic beverages. This isn’t common knowledge but it fucking should be.

If we take a booze-fueled time-machine back to 7000 B.C. to a settlement called Jiahu in China, we will discover the oldest alcoholic beverage being brewed… by women. Jump ahead to 700 A.D. to the Andes Mountains in Peru and you will find Wari women making a very important fermented beverage called Chicha.  The role of brewer gave the women power and influence as Chicha was of vital importance to the entire Wari people, appearing at every feast and ritual. Now approach the time of the Black Death in the late 1300s, where women still ruled the world of fermentation. The Alewife played a pivotal role. Not only did the Alewives brew and sell the bulk of the ale but that ale provided much needed nutrition and, most valuable of all, a clean beverage to drink.

As we begin to approach modern times ale changed and with it the industry as a whole and women’s roles were soon diminished. Hops were widely added to ale for the first time and soon took the drinking world by storm. Now called beer, it would last longer thanks to the natural preservatives in the hops so beer could begin to be mass produced and shipped over longer distances. This spelled the end of the alewife (along with the whole witch thing) and men took a firm control of the booming beer business.

Today, beer remains big business with nearly 8,000 breweries in the country. These breweries are predominantly owned and operated by white dudes. This is changing, however, as the business is evolving. Craft beer is definitely driving this growth in diversity. It won’t necessarily continue to happen organically. It can use a push. 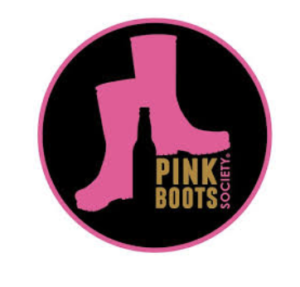 Enter the Pink Boots Society , or PBS, for short.

Thanks to PBS, a non-profit organization with almost 2,000 members worldwide, the women in the craft beer world have a massive support network to further their education and experience. Teri Fahrendorf’s embarked on an extensive solo tour of breweries to meet and brew with as many different individuals as possible. In the process, she realized there were so many women beer professionals with no real idea they were not as alone as they probably felt. Teri decided it was time to bring them all together and the Pink Boots Society was born.

Though it started small in 2007, PBS has grown into a well-knit community of women beer professionals. Members now count on mentors, scholarship opportunities, collaborative brew days, and the camaraderie found within the organization to assist them in growing within the industry.

Just ask Brienne Allan, leader of the Boston Chapter and a brewery Production Manager, how much PBS accomplishes for women in the beer industry.

According to Allan, the international group’s broad goals are to strengthen “connectivity and networking which helps us share information and strategies.” This is the underlying foundation supporting all that PBS does for members.

PBS wants for every member to succeed in the industry whether they brew beer, serve beer, or write about beer. They also aim to elevate the skills of members so that they may become official beer judges at major competitions. All of this is achieved through seminars, mentoring, and scholarships.

Beyond the incredibly valuable educational opportunities, PBS’ local chapters allow for members to meet up regularly, “help each other find new jobs, further their careers through education…and making a more inclusive environment,” says Allan. The friendships that grow from the space created by the meetings are just as important as the scholarships.

How do they do it? Well, in just the first few months of this year, the Boston chapter has raised over $70K through fundraising. This affords them the chance to award 30 scholarships this year to institutions like Barth Haus Academy, Craft Beer Business School, the Siebel Institute, UC Davis, and many more. No other chapter worldwide can boast this kind of academic prowess! 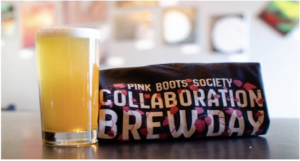 You were gonna buy beer anyway so try a Pink Boots collaborative beer when you see one! Just look for their logo on the bottle or can. This year there are close to 70 local breweries teaming up with PBS to make great beer to serve a great purpose. Breweries from Boston Beer Company (aka Sam Adams), Night Shift, and Trillium to Craft Roots, Earth Eagle, and Silvaticus all rock the Pink Boots for the cause.

In addition to beers, the Boston Chapter frequently puts on events with proceeds going to support their programs. The next one up on the agenda ought to be a humdinger – The Rumble in the Jungle: Arm Wrestling Summer Showdown! Taking place at True North Ales in Ipswich on June 30th at 3pm, it promises to be a blast. There will be beer, badass women brewers in friendly competition, and the added benefit of broadening the minds of local beer drinkers.

Go support the Pink Boots Society because, as the leader of the Boston Chapter, Brienne Allan, points out, “There are so many of us, it’s honestly shocking that the consumer doesn’t know that most of Massachusetts beer is made by women.”