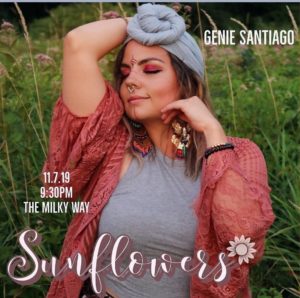 A promo image of Genie Santiago for the Sunflowers show on 11/7/19. A picture of Genie in a summery outfit with a floral background.

Spooky season is over, but the vibes live on for a full-time witch like Genie Santiago. Genie Santiago is a Boston-based musician, arts organizer, and collaborative artist whose music unites the spiritual and sexual realms. Her 2018 EP Know Your Worth featured five sultry tracks including one duet with Boston MC Red Shaydez, and her most recent release, “Spirit Party”, is an ode to self-love (in more ways than one). Santiago is also the organizer of the Sunflowers music series, an intimate gathering where performers are encouraged to share their music and the stories and emotions behind the songs.

In advance of the upcoming Sunflowers event on November 7th — an all-star lineup consisting of Brandie Blaze, Anaís Azul, Ava Sophia and Santiago herself — Hassle writer Hassan Ghanny sat down with Santiago to talk about her artistry, her heritage, and her witchy womanhood.

Boston Hassle: Your artistic presence fuses the creative process with the spiritual realm. What does it mean to bring the spiritual world into the things you put out there as a recording artist?

Genie: I was taken away at 10 months from my mom [with] my siblings. We got put into foster care; I was in foster care until I was 6. So I didn’t really have that sense of, like, home, or community. Bad things happened, switching around from home to home. A lot of abuse, a lot of trauma. I felt like I had this affinity with other things – with art, with spirituality. I would see things that other people didn’t see, I would feel things and know someone wasn’t a kind person. [After] the trauma, I developed this sixth sense with people. But I was always really interested in the magical world. I was like, ‘Something is gonna happen for me. Something magical, something bigger than the projects. Something bigger than being hungry.’

I was trying to figure out ways to cope with that anger. And that’s when I started with meditation, and then reading about Buddhism, and thinking that that was the way to the spiritual world. And then with that stuff, I started exploring my roots. And what it meant to be a taína. And then I started finding things out about my family, that my grandmother was a bruja but akin to a medicine woman — and my grandfather and father had these [same] affinities for spirits. But it was more of how to get in tune with myself. And being more in touch with who I was as a spirit. And my anger slipped away, and I wasn’t carrying my acceptance of the abuse and the trauma anymore. And I wanted to give that to other people, especially people of color.

This is our ancestors, this is who we are. Even if you’re not raised there, it’s still in you. The trauma from [our] ancestors is within us too, in addition to our own trauma. So how do we let that go?

Boston Hassle: Do you consider yourself an artist who aims to heal, or a healer who makes art?

Genie: Wooo! That’s tricky! (laughs) I would say an artist who aims to heal, because I was an artist first. That’s the only reason why — because I was sure of that first. I healed myself first through art. And through that journey, I realized that I wanna be here. So how can I do that?

Music saved me. My art saved me. I definitely was like, ‘I have this mic — what am I gonna do with it?’ Am I just gonna put on a show and be pretty? Do I just do this [choreography] and sing these songs? Or can I get people to listen? And when I first started doing music, I had no idea what I was doing. People were telling me what to do, producers were telling me what to do, and I was never happy. I was always so stressed in the studio, [thinking] like… this is not how this is supposed to feel. And it wasn’t until I did “2:22am” that I [felt] like I had more creative control of what I wanted to do. And then I did “Spirit Party”, and I was like, This is what I wanna do. This is the kind of music I want to make that’s, like, hip-hop and R&B and sensual and spiritual all at the same time. 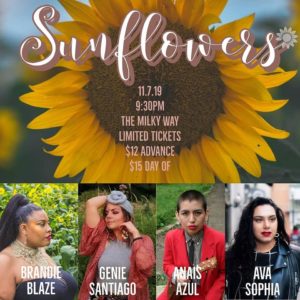 A promo image for the “Sunflowers” live show on 11/7/19. A picture of a sunflower with text overlaid, with images below of performers Brandie Blaze, Genie Santiago, Anaís Azul, and Ava Sophia.

Boston Hassle: What can we expect from the upcoming Sunflowers live show on November 7th?

Genie:As artists, we’re always talking about having that [proverbial] mic, and having that power of talking to that mass of people, having [their] attention… so what are we gonna do? I was doing these shows, and I was feeling like… You get this limited amount of time to talk, and show who you are. You have to put on a  show — this promoter brought you to this one spot, they expect you to sell tickets and put on a show. A lot of times I feel bored when I’m watching artists, because, like… I don’t know who this person is. I don’t feel any connection [to them]. Art does different things for people — for me, I wanna feel something.

So for a long time I tried to figure out, ‘How can I be entertaining and also moving?’ So I created Sunflowers. It’s a way for artists to unplug and just show people who they are a little bit. Tell me your story! Where did you come from, why did you write that song? And the people that are buying those tickets come for that reason. They’re not coming there [just] to be entertained, they’re coming there to feel something. And to connect with artists in their city. So I feel like, you know, I wanted to do shows like that, so I created it myself. (laughs)

I have this mic, and I’m gonna sing, but I’m also gonna make you think, and maybe cry a little bit. But I’m gonna leave somebody with something.

Boston Hassle: You speak a lot to your experience as a Latina in your music. At Sunflowers, the bill is all women and non-cis male identified performers, so you are also creating opportunities for marginalized music artists. How does your womanhood and your intentions to uplift women inform your artistry?

Genie: I think there’s a couple things going on there. Cause, like, I am a Latina — I identify as that. But I have to understand that — as anyone from the Caribbean understands — you’re kind of this mutated race. You’re this created race of European, indigenous, and africano. I understand that when people look at me, they’re not really sure what I am, who I am – they don’t see me as queer, they don’t see me as Latina, they might [even] see me as a straight white woman. And also — I grew up poor, I grew up in the projects, I was sexually abused, and I have taken back my sexuality — and I love being sexual and I’m healthy about it. They wanna put us in these boxes, like, if you’re spiritual you can’t be sexual. “Spirit Party” was that — that our sexuality is our spirituality.

It’s coming to peace with who you are inside, and not what box you fit in. It’s just how you feel inside. You might not fit in my box.

Boston Hassle: In 2019, the concept of healing is often commercialized and made into a consumer product, to the expense of actual recovery. For all of us who need to heal and find healing through music, how can we take back our healing processes?

Genie:You have to learn your ancestral ways from people who have not hurt your ancestors. You know what I mean? When you go to Salem and you go to these witch stores, it’s definitely aimed at the white witch, the Gaelic magic. Which is a beautiful thing, like — I have Irish ancestors — but there’s not a lot for African magic, or Caribbean magic, Santería. You have to go to a botánica [herbalism shop]. And you can’t just like, ‘Hey Google, where is my local botánica?” You just gotta know where it is. So you have to be very careful of the people who are exploiting ancestral magic as their own, and getting money from it.

And I was really nervous about [“Spirit Party”] because it is a very spiritual, sexy, powerful song. And so, working with [my producer] Mertz — he’s not very spiritual or powerful or sexy. (laughs) But I was nervous about going there. First of all, I’m alone with a guy in a studio. And he was just like, so sweet, and made it so comfortable for me. And acknowledged that this is a safe space, and said, ‘Anything that I can do to make this space safe for you, you let me know.’ I said, ‘Listen. I’m a sexual abuse survivor. I need this to be a safe space. I don’t want strangers coming in of the room — this is my session. I don’t want anybody in here that I don’t know, that I didn’t invite into myspace.’ And he was very very, like — “I get it.” He made sure that the energy was cleared out, he let me burn palo santo and candles. And I was nervous to go in there and be like, ‘Here’s the song, you ready?’ — Off of his instrumental, this is what I created off of your art. And so I sang — “Masturbate, meditate, manifest, repeat.” — and he was like, ‘Yoooo, this is the greatest shit ever!’ And I was like “…really?” So that got me excited, that this straight white male could get excited about something that was obviously very sexual and spiritual.

I want Sunflowers to feel like how you should feel when you come out of, like, a yoga [session] or anything that feels like church. Music has this power, this psychological power to move you, and move the masses. So I wanna feel like that. And I want to be inclusive to all women when I create a healing space. But you need to know, honey, when you come in here, that it’s first-come-first-serve for my people. 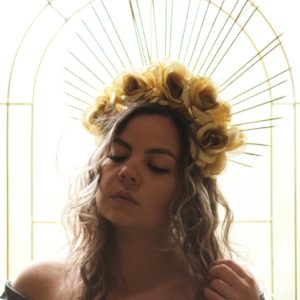 An image of musician Genie Santiago, wearing a flower crown in front of an illuminated window pane and a white background. (Facebook: Genie Santiago)

HASSAN GHANNY (@diaspora.gothic) is a writer, performer, and music journalist based in Boston.