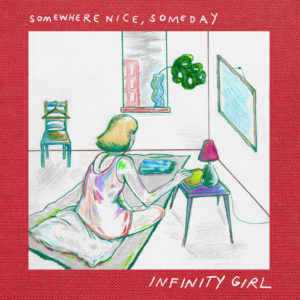 Why did it have to be so good? It’d be different if this were an average album but honestly it’s the best Infinity Girl has released and because it’s their last (the band have called it quits) it has a bittersweet satisfaction like arriving to a great party just as everyone is leaving. Instead of focusing on the negative though, let’s enjoy what they left behind.

Floating around in a haze this album exists in it’s own heavy, insular world inviting listeners in. Opener “The Comfort of What I had” sounds like an old memory. Warm, nostalgic and beautiful I wish it could go on for 20 minutes.”But I’m Slow” digs in immediately with a yearning, distorted hook sung over lines “life gets harder now / and it’s faster now / but i’m slow”. This dichotomy of blissful music over sad lyrics becomes a central theme throughout this album but works because they balance each other like a salve for existential angst. In a recent interview singer/guitarist Nolan Eley addresses these themes stating “On most of the songs on this album, I’m just trying to come to terms with adulthood and trying to reconcile the life I thought I would have by now with the life I’m actually living”. Depending on your mood this album could have a night and day difference in experience.

Shoegaze may be a peculiar genre (& not always given the respect it deserves depending on when and where it was released) but a decade from now I bet this will be considered a classic. Try to get tickets before the local reunion shows sell out.