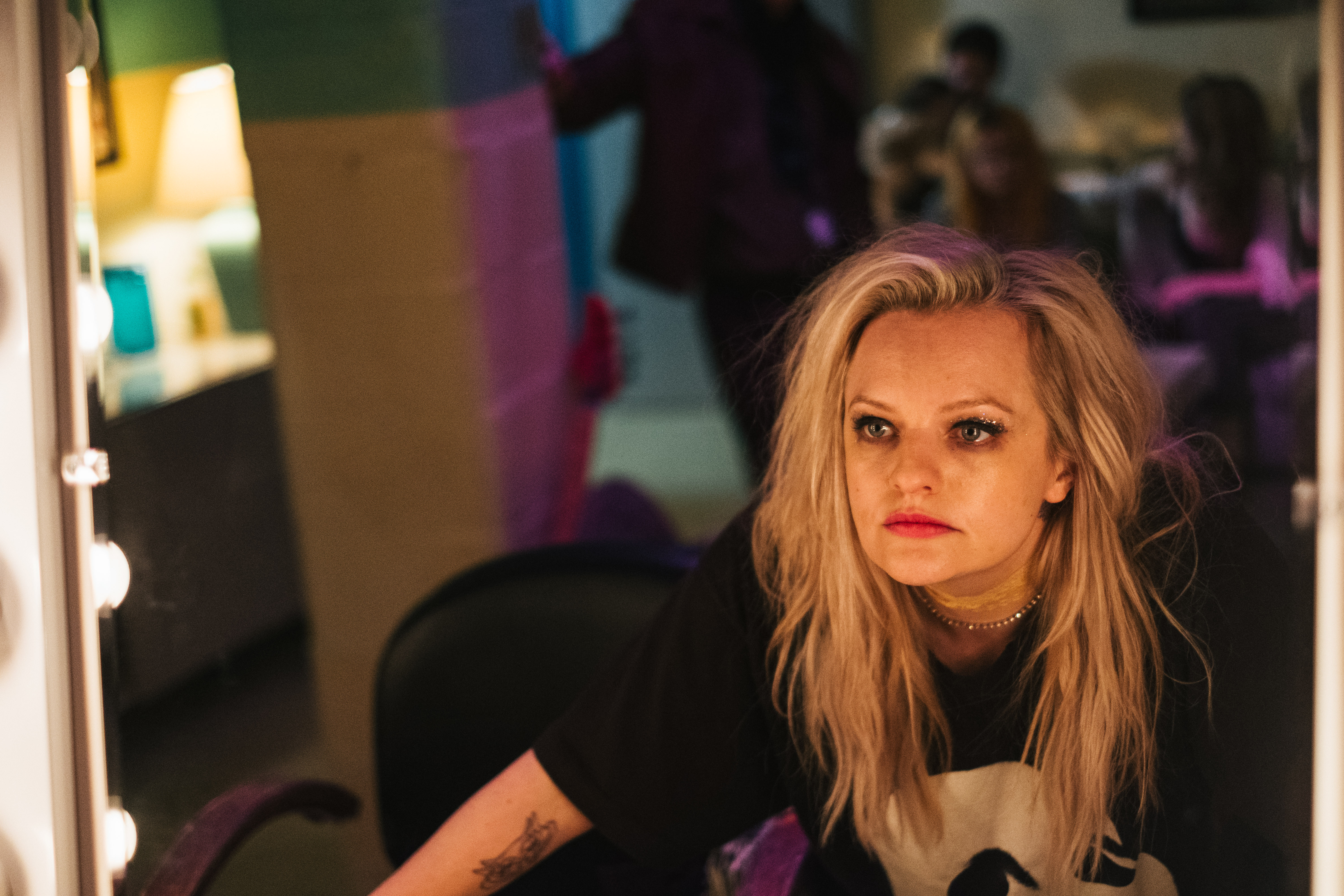 Films centering on female musicians and their encounters with and reactions to fame and notoriety seem to be in vogue, with the latest iteration of A Star is Born and the ambitious Vox Lux coming out in 2018, and this April also giving rise to Elle Fanning’s pop performance in Teen Spirit. The latest in this string of portraits-of-an-artist is Her Smell, which deviates from the bubble-gum pop and overnight fame of the previous three and dives headfirst into gritty, addiction-fueled, riot grrrl mayhem.

In many ways, Her Smell is a familiar story of a tortured artist, in this case the pioneering frontwoman of punk band Something She. Using the pseudonym and donning the persona of Becky Something, Rebecca Adamczyk (Elizabeth Moss) careens through the first three acts, oscillating between new-age rituals, excessive lateness, smeared eyeliner, and open hostility for almost everyone she comes into contact with. We understand immediately that Becky Something is a performance, a projected image of a take-no-shit rock star, a suffering genius. She speaks like a drug-addled prophet, or maybe just an experienced lyricist, playing with rhythm and alliteration to deliver lines that would be profound if they weren’t so self-conscious.

The actual plot of Her Smell isn’t really all that important. Told in five acts, with each preceded by home-video-style footage of the band in their heyday, it skips the rise and goes straight for the fall, with each of the first three acts revealing something more gruesome and unappealing about our protagonist. The passage of time is marked by Becky’s slipping grasp on reality, the changing hair of her bandmates, and the aging of her daughter, Tama, whose interactions with her mother seem to consist largely of being picked up and set down in various locations backstage. They feel cyclical, with bandmates quitting and coming back and Becky’s ex, Danny (Dan Stevens), popping up backstage to discuss childcare, with arguments that seem insurmountable forgotten seemingly overnight. Something She’s other two band members, Marielle (Agyness Deyn) and Ali (Gayle Rankin), largely treat Becky’s raucous unpleasantness like the tantrums of a child, having grown accustomed to the excess and abuse that characterizes their frontwoman. 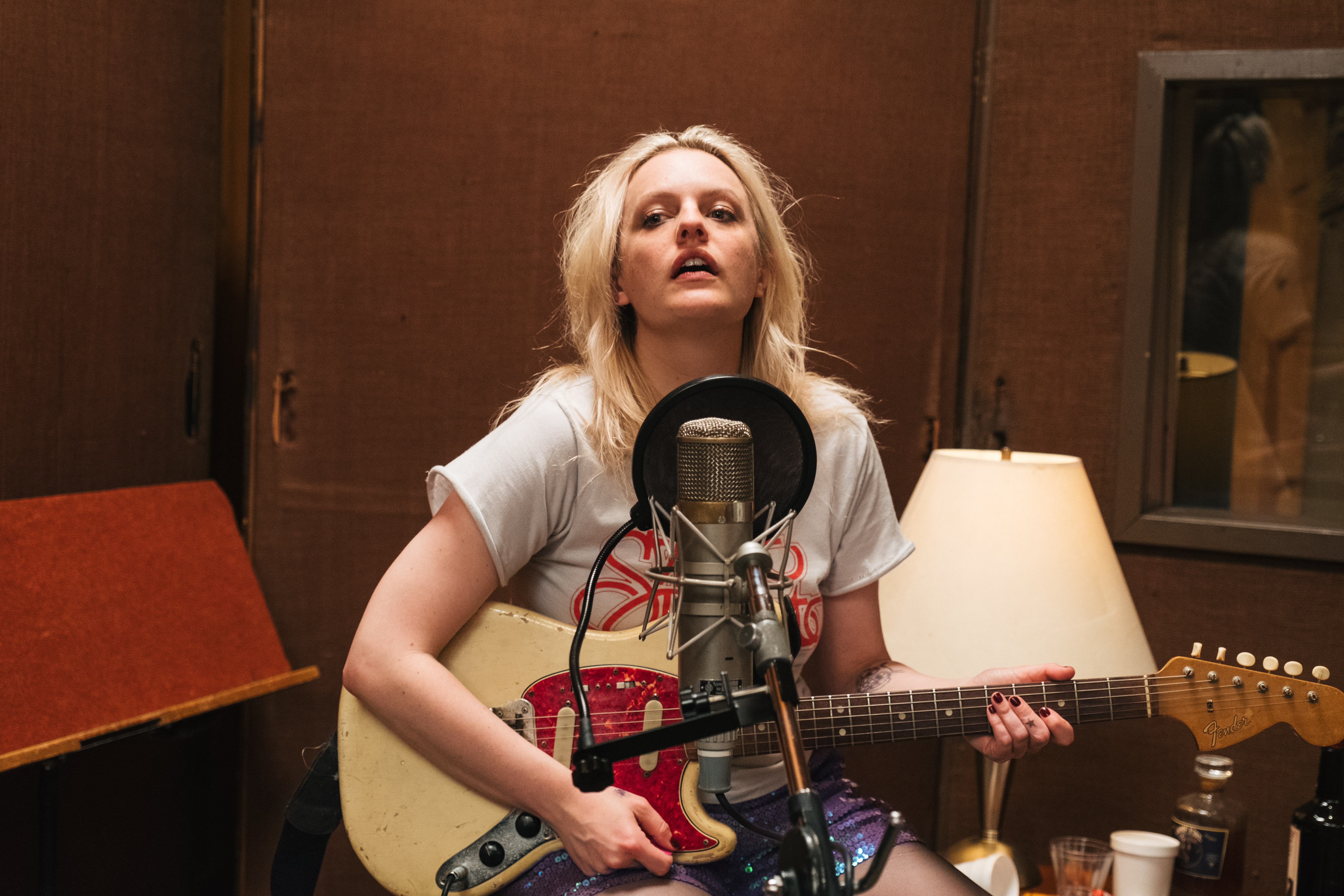 When the head of their record label, Howard (Eric Stoltz), brings the Akergirls (comprised of Ashley Benson, Cara Delevigne, and Dylan Gelula) to the studio to record after giving Something She months of expensive and ultimately unproductive leeway to create a new album, Becky attempts to piggyback on their youth and talent to claw her way back to the top. The scenes wherein the naïve, rainbow-haired Akergirls fluctuate between awe and righteous anger in the wake of Becky’s bizarre behavior starkly contrast the mix of resignation and exasperation with which Marielle and Ali approach their interactions with her.

While Elizabeth Moss’ brilliantly unhinged performance deserves much of the credit for making Her Smell the fascinating train wreck that it is (and I really do mean that as the highest of compliments), the score and sound design work tirelessly alongside her to create an atmosphere of anxiety, chaos, and self-destruction. Composer Keegan DeWitt and sound designer Ryan Price flawlessly re-create the sonic experience of being at a concert venue, but go several steps further to create a deliriously garbled soundscape reflecting what it feels like to be inside Becky’s mind. The audio booms, is obscured by background noise, and occasionally gets close to dropping out altogether, leaving the viewer careening ever closer toward a panic attack.

I’ve intentionally omitted a thorough discussion of the final two acts, which disrupt the cacophony of the first sections with moments of stillness and sobriety. Remarkably, writer and director Alex Ross Perry is able to get the audience to empathize with Becky after watching roughly an hour of her abusive behavior, and we end up with the type of redemption arc often reserved for male artistic geniuses. As chaotic and tense as the film is, the realistic portrayal of an unlikable yet undeniably talented woman and the fall-to-redemption trajectory of her story is a welcome relief from the dominant cultural narrative that reserves redemption for the men and relegates women to vehicles for their salvation.