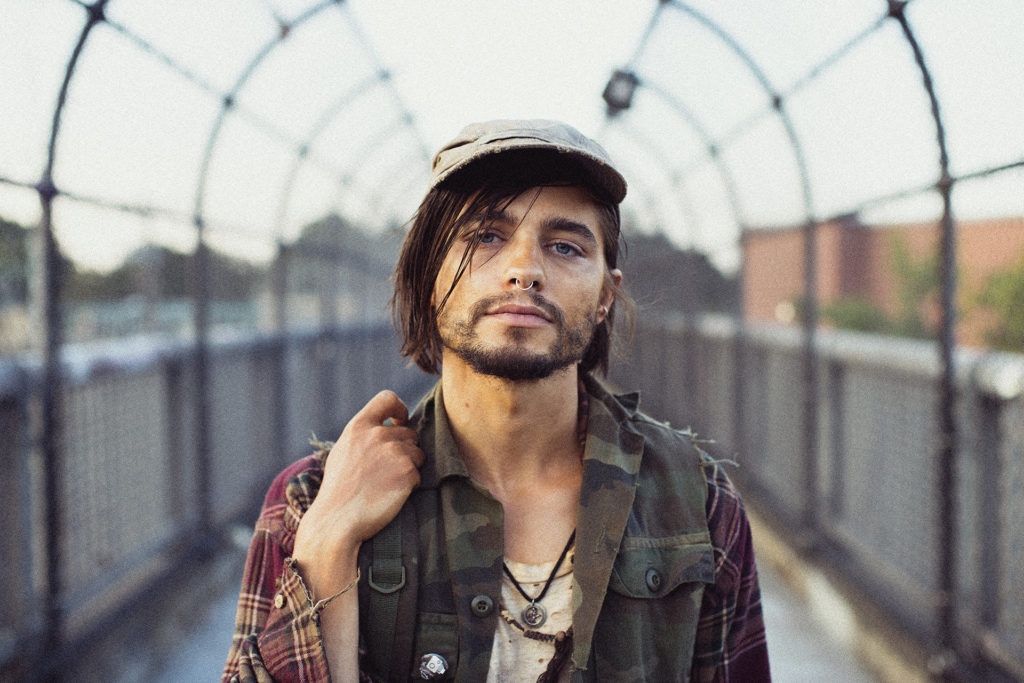 There are movies that hit close to home, and then there’s Gutterbug, the feature debut from local music video director Andrew Gibson. Shot on location primarily on the streets, parks, and basements of Allston, Gutterbug perfectly captures that familiar, lazy grunge that will be instantly recognizable to anyone who’s ever ambled from Blanchard’s to the McDonald’s across from Great Scott (which I’m going to go out on a limb and guess is just about everyone reading the Hassle). It’s not just that Gibson picks the right places to shoot (which he does); it’s that every person, every moment, every activity oozes Allston. When the movie ended, I found myself scanning the credits to see if I recognized anyone I knew. I didn’t, yet all of these characters are instantly recognizable, hanging out at the T stop or elbowing past you at a show. Some movies are so real you can feel it; this one you can practically smell.

Gutterbug tells the story of Steven “Bug” Bugsby (Andrew Yackel), a soulful, homeless crust punk living intermittently in Ringer Park, shooting the shit, hustling drugs of dubious origins, and catching punk shows in various underground (read: basement) venues. His primary points of contact are his speed-freak best friend Slim (Justin Pietropaolo), skeezy weekend-punk drug dealer Raleigh (Geoffrey Van Wyck), and his girlfriend, the tough, sensitive Jenny (Hannah Mosqueda), along with the various lost souls who shamble in and out of his life (and their own). Like most folks in similar circumstances, Bug’s story is a sad one; a smart but disaffected youth, he stormed out of his comfortable suburban home on his eighteenth birthday and never looked back. Realizing while bumming smokes at the 7-11 on Comm Ave that he’s just turned twenty-one, Bug gets a sudden bout of homesickness, and realizes that, more than anything, he needs to reconnect with the life he left behind– by any means necessary. Unfortunately, we know from the framing story, in which Bug is pulled from a bloody car crash and wakes up handcuffed to a hospital bed, that his plan goes off the rails somewhere along the line.

From the moment Bug is revived and the story hurtles into its extended flashback, Gutterbug dives into its characters’ lives with an electric intensity, like a Trainspotting for the basement show set. Its characters follow circadian junkie rhythms, alternately yakking a mile a minute and nodding off while leaning against some piece of public property (frequently tombstones, in a handy bit of visual punnery). Bug and his friends perpetually hover somewhere around rock bottom, blatantly self-destructive, and eventually simply destructive. Yet you also can’t help but root for them. This is due in part to the talented young cast; Yackel, Pietropaolo, and (especially) Mosqueda inhabit their characters so vividly that I assumed they were cast as variations of themselves, and was surprised to learn that none of them are native Bostonians (Pietropaolo is a Shakespearean!). Even when they’re not saying anything– or when they’re saying a whole lot of nothing– you know where they’re coming from.

But it’s also thanks to the inherent humanity that runs through the film. Stylistic tics and subject matter aside, this is no edgy black drug comedy, but rather an achingly melancholic look at life on the margins of society. Even if you don’t know these people, you’ve seen them around (perhaps in the exact locations shown here), and perhaps tried to look past them. What Gutterbug does is force you to confront the fact that these are real people: sad, lonely kids doing their best to have a good time in the face of near-oblivion. The more you get to know Bug, the more you want to see him get his life back on track– and the less likely that seems.

Of course, every high has its comedown. As Gutterbug unspools, and its flashes back and forward become more detailed, a curious thing happens: it starts to look less like a gritty crime drama and more like an intimate portrait of a family torn apart. In some ways, these scenes can’t help but feel like a bit of a let down following the electricity of the first two acts (and there is one revelation in particular that might have packed a bit more of a punch if it came a reel or two later), but it feels like a necessary chaser. Like Bug, the viewer needs a fresh air, and these scenes provide a refreshing dose of clarity. Despite literally wallowing in the gutter, Gutterbug is ultimately surprisingly life-affirming. With his eye for location and love of his characters, Gibson makes Allston look something close to beautiful– which is, in itself, something very close to movie magic.

Premiered Sunday, 4/28 @ Somerville Theatre, as part of the Independent Film Festival Boston
For updates on Gutterbug, check out its official website, or follow it on Facebook or Instagram (and be sure to check out our interview with Gibson here!)