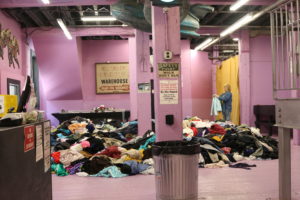 On some level, it’s intimidating to see such a large pile of clothing, splayed out as if in our middle school bedrooms – each garment of variant size and color. But the possibilities are endless; according to manager, Amy, all it requires is an open mind to sort through the eight hundred and fifty pounds released at the beginning of each day, doubled on Saturdays and Sundays.

With garments sourced from an assortment of places, many articles are on their second and third chance. They’re baled, looked over and re-baled. Unsold clothing from the other departments end up baled and discounted. They also buy clothing from local shelters, so that money can be used on supplies.

In addition to an open mind, I suggest bringing clothing you can move in and a pair of shoes you can slip off to climb around in your socks.

In the time that I was there, most people that I saw didn’t enter the bowels of the pile. Most would yank their way around the edges, like pulling magic scarves, and still find a couple of things they liked.

Amy’s advice was not to go in looking for anything in particular, which suits my style perfectly (it has been described to me as “eclectic” by hipsters), and is probably why I approach the pile with almost no hesitancy.

But upon seeing the rumpled rainbow of textiles, I decided there had to be one trait to utilize to sort what I was seeing. The most apparent one was color. 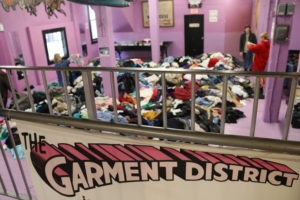 Some articles were well-loved. Their small imperfections, like knee rips in jeans or tiny stains or bleach patterns, may fit certain aesthetics. I also found a lot of baby clothes that I would wear, and other beautiful garments that didn’t fit me. There were a ton of cool pieces that just weren’t my style but a surprising number of pieces that were in perfectly good condition.

I spent an hour making my way to the center of the pile. My favorite items were buried in the sections that hadn’t been picked over. It’s important to check the armpits of t shirts and the butt pockets of jeans.

There were plenty of seasonal articles, as the Garment District website suggests. I was able to find a winter jacket that was in better shape than the one I bought earlier this year from another secondhand store, and this one with totally intact pockets. And, because I went on a Friday, I got it for only $1 per pound, instead of the usual $2.

The service that TGD provides is not only saving non-biodegradable textiles from filling up landfills with other fast fashion victims:  They also provide affordable clothing to a wide variation of sizes and styles. Since their start in 1986 as an off-shoot of Harbor Textile Waste Co., the Garment District has utilized By The Pound to allow the public to browse excess fabrics.

According to their website, the Garment District buys secondhand clothing on an individual level as well, selecting “approximately one piece in twenty,” to steam and tag for sale in the store, while other pieces end up in By The Pound.

The Garment District is part of the community, and a green initiative is part of their mission. The clothes that can’t be sold are sent to a “shoddy mill,” where the fabric can be ground up and reused, beginning a new life cycle.

With trend turn-overs and fast fashion causing more outsourced labor and pollution, it seems impossible for those who don’t make a lot of money to feel good about the clothing we buy, or feel good in the clothes we wear.

The satisfaction of finding a great deal at the mall or on Amazon pales in comparison to approaching the counter with your massive bag of some of your favorite brands, weighing out to over 11 pounds, and handing the cashier about $12 cash to settle up.