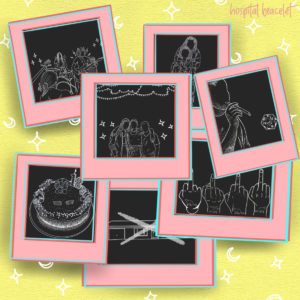 Hospital Bracelet’s pastel-driven aesthetic might be misleading upon first glance. Album art featuring images of birthday cakes and doodles of moons and stars might lead one to assume that this young band is following in the vein of Frankie Cosmos, Emily Yacina, or another soft indie pop band that has populated the musical marketplace for the last few years.

But Hospital Bracelet’s debut full-length, South Loop Summer, delivers something decidedly different. This is not an indie pop album for the faint of heart. It’s an excruciatingly delightful emo album filled with exactly what emo should be filled with, sweet guitar riffs, well placed screams, and lots and lots of pain.

The Chicago based trio, made up of  guitarist and vocalist Eric Christopher, bassist Arya Woody, and drummer Manae Hammond, has quickly gained notoriety within emo circles. With a record deal from Massachusetts’ own Counter Intuitive Records, the emo-focused label behind acts such as Mom Jeans, Prince Daddy and the Hyena, and Origami Angel, the group has solidified its place in the hallowed halls of modern emo.

South Loop Summer is composed of a few repackaged songs the band had released in the last couple years, as well as four tracks of new material. “Sober Haha Jk Unless,” the band’s biggest song (over 600,000 streams), released in January of 2020, and saw a re-recorded version put on the album. “Sour OG RPG” and “Happy Birthday,” the two other repurposed tracks, had been released on the Neutrality Acoustic EP in late 2019, but feel as if they’ve been upgraded and rounded out with the addition of a full band in the studio, instead of just a solo Christopher.

The title track, and first song on the album, “South Loop Summer,” is a fast paced ode to the South Loop section of Chicago. The neighborhood is painted in rather unceremonious pigments, with the noisy chorus chanting: “It’s been a South Loop Summer / In bars I shouldn’t be in / And men I shouldn’t sleep with / And people I wish I knew better.” Christopher lays out a bittersweet story of city-life, contemplating their mistakes, rising rent and anxiety about their future, an all too familiar feeling for most of us. Nevertheless, it’s the type of song that should be listened to at the absolute maximum volume your ears can handle, featuring a stupidly catchy riff that’s guaranteed to stick in your head, massive, broad choruses, and a steady foundation of drums and bass that the track is perched on.

Bitter tracks like “Feral Rat Anthem” serve as a forum to chastise a former partner for their actions. Christopher expels venomous wails, opening the song with: “You tend to hit me up late nights at 2 AM / Sliding into anyone that you can find’s DM’s / Makes sense that there’s no proof of stable friends / Pathological liar burning at both ends.” This conflict is described over the top of an enthusiastically mathy guitar line, giving Christopher a chance to show off their knack for the essential emo art of shredding in strange time signatures. The track transforms from tinder to open flame to scorched earth over the course of its four-ish minutes, ending with a blow-out chorus that condemns the song’s subject to hell. It’s a track fueled by resentment and rage,  polarizing emotions that may come across as over-the-top to certain crowds, but will find a home in the hearts of those often consumed by fury.

South Loop Summer is an excellent premier for one of Emo’s new darling’s, showing the band’s ability to transfer emotion while maintaining accessibility. It’s an album that can be consumed in various ways, whether you’re drunk and alone in your bedroom, or speeding around the city yelling in the car with your friends, you’ll enjoy it. I’m sure you’ll be hearing more from the Chicago-based trio in the near future as they ascend the ranks of emo.

You can find Hospital Bracelet on Bandcamp, on Instagram, and I highly recommend checking out Christopher’s growing presence on Tiktok.

Liked it? Take a second to support Caleb Peck on Patreon!