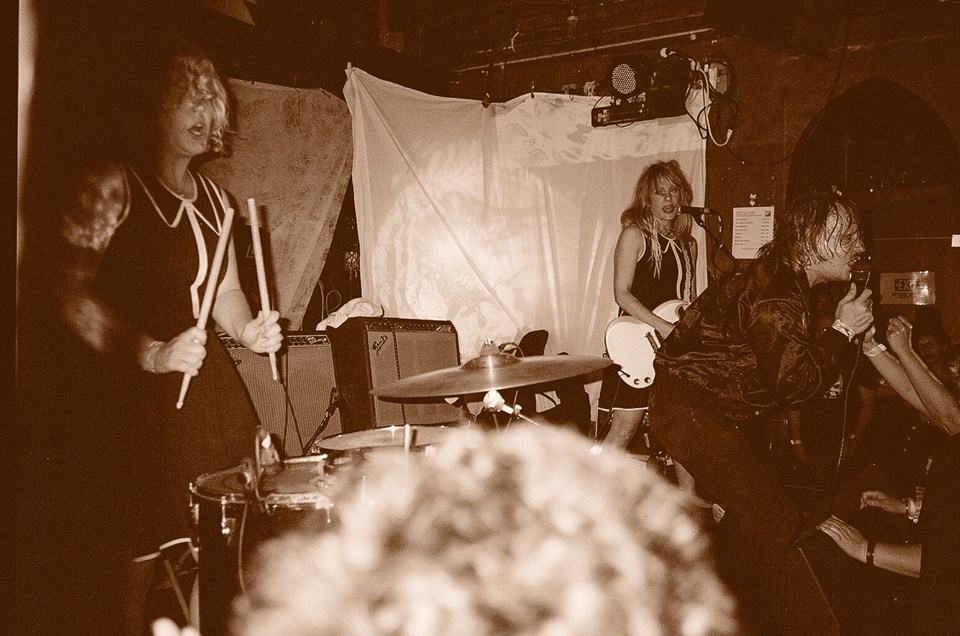 Hilken Mancini is a Boston goddess and legend, not to mention co-founder of Girls Rock Campaign Boston. These days you can see her shredding alongside Andy Macbain and Erin King in the hard-rocking ensemble, The Monsieurs, the most interesting, punk, and audacious live band in Boston, if not the world. Before they play Kids Like You And Me’s second annual Rama Lama Ding Dong on June 16th, Hilken answered a few questions about The Monsieurs, being a musician, and what’s next for the band.
Keeley: When and how did The Monsieurs form? How would you describe the bands music chemistry?
Hilken Mancini: I was a big Tunnel of Love fan. Andy was not playing/writing for the band once Makoto and his brother Anthony moved away. So i wanted him to start another band… he made me ask my Best friend to play drums and then showed us all these songs-  then we all got married.
K: Have your goals and perspective of being a musician changed throughout your life?
HM: yeah totally. at 22 i thought i would have a record deal and tour forever and then reality of getting dropped from atlantic records happened. so i just did other stuff for a while – like art projects like Punk Rock Aerobics, and played in a band with this guy from Deluxe folk implosion- called the Count Me Outs, and then we played a show with Tunnell of Love and I was psyched about rock and roll again.
K: In what ways have you seen the Boston music scene change and evolve over the years? And in what ways has it stayed the same?
HM: it always stays the same, you load in and maybe get soundcheck, and hope that people show up., and then wait around to get paid. we just all had record deals back in the 90’s and you could buy a van or maybe get tour support form your label- even if your tour got cancelled and you got to keep the money.   ….there just are more bands and no one has a record deal people have better taste now i think. ha ha the internet tells you what band is Kim Deals favorite band and then you can go listen to it and find out about the Wipers. before you had to go talk to people and ask people at record stores what was cool. Or read Incite or Forced Exposure.
K: What are some of your biggest inspirations or influences?
HM: I love SSDecontrol. and I love Dolly Parton. and I want to look and play like Johnny Thunders
K: Are there any local (or non-local) bands that you all feel particularly influenced by or admire?
HM: I want to play as loud as J does in Dinosaur with Marshall stacks behind me and a twin in my face as my monitor.
K: What upcoming projects and releases do you have?
HM: Black Gladiator Slovenly puts out our record in October 2017.
Catch The Monsieurs in the flesh at Kids Like You And Me’s Rama Lama Ding Dong Friday, June 16th!
Mid East Up // 18+ // $10 // 7pm // FB Event
Tags: hilken mancini, kids like you and me, The Monsieurs

Having a chat w/ Shiloh of Butch Baby ahead of their streaming show on...

We recently asked each member of the Boston-based postpunk trio House of Harm to curate a unique playlist for The Hassle. You…

Who knows? Angela Sawyer knows! And she’s playing as part of the Hassle Plague...

But what her performance will be like on saturday @ 8pm is anyone's guess!