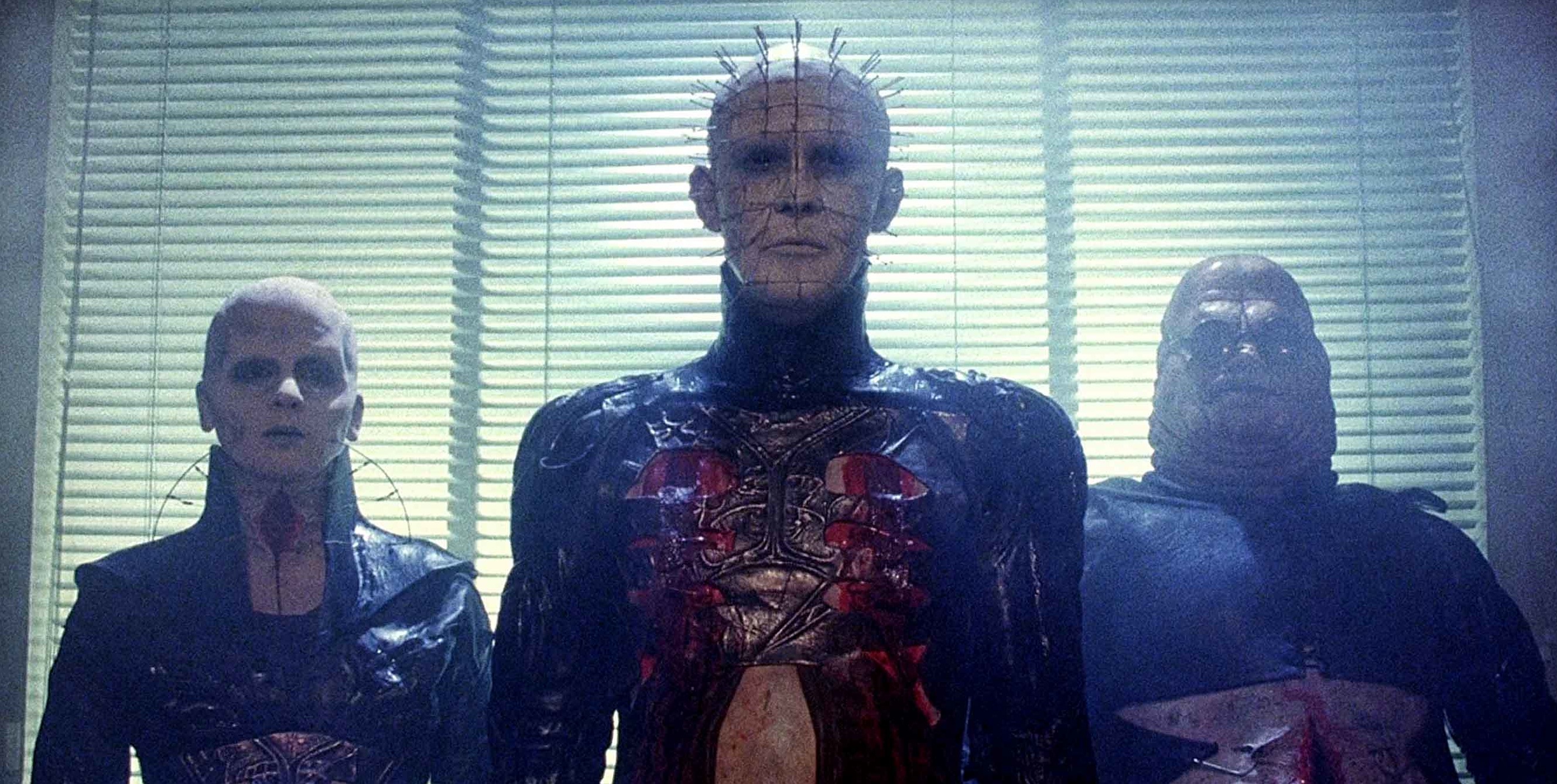 Lovecraftian themes run deep in a lot of popular horror stories, touching on the unknown, cosmic horror, and whatnot. Some are subtle about their approach, while others flaunt these themes in your face to make the final point much more obvious to an audience that might not immediately grasp what was handed to them. And there is no better example for the latter than Clive Barkers ULTRA Lovecraftian tale of purgatory, Hellraiser.

After buying and tinkering with a puzzle box that opens a gateway into hell, piece of trash Frank (Sean Chapman) accidentally unleashes the power of the Cenobites, led by the iconic Pinhead (Doug Bradley), who physically rip him into pieces. After the death of Frank, his brother Larry (Andrew Robinson) and Larry’s wife Julia (Clare Higgins) move into Frank’s old house, where they accidentally bring a small piece of Frank back to life. Julia discovers this, and through Frank finds out that he needs sacrifices to grow back to his old form. With Julia’s help, Frank murders and tears his way through victims in order to become human again. Unfortunately for Frank, Larry’s daughter Kirsty (Ashley Laurence) discovers this plot, and works to stop Julia and Frank before it’s too late.

Even if you haven’t seen Hellraiser, you probably know about the lead Cenobite, Pinhead. Seen as a slasher icon thanks to the shitty and cheaply made straight to DVD sequels that flaunt Pinhead to draw in any form of an audience that they can, his role in the first Hellraiser film is much more cerebral, becoming more of an unknown threat that acts as a ticking time bomb for our characters. The real villain in this haunting tale is the absolute piece of human trash that is Frank. 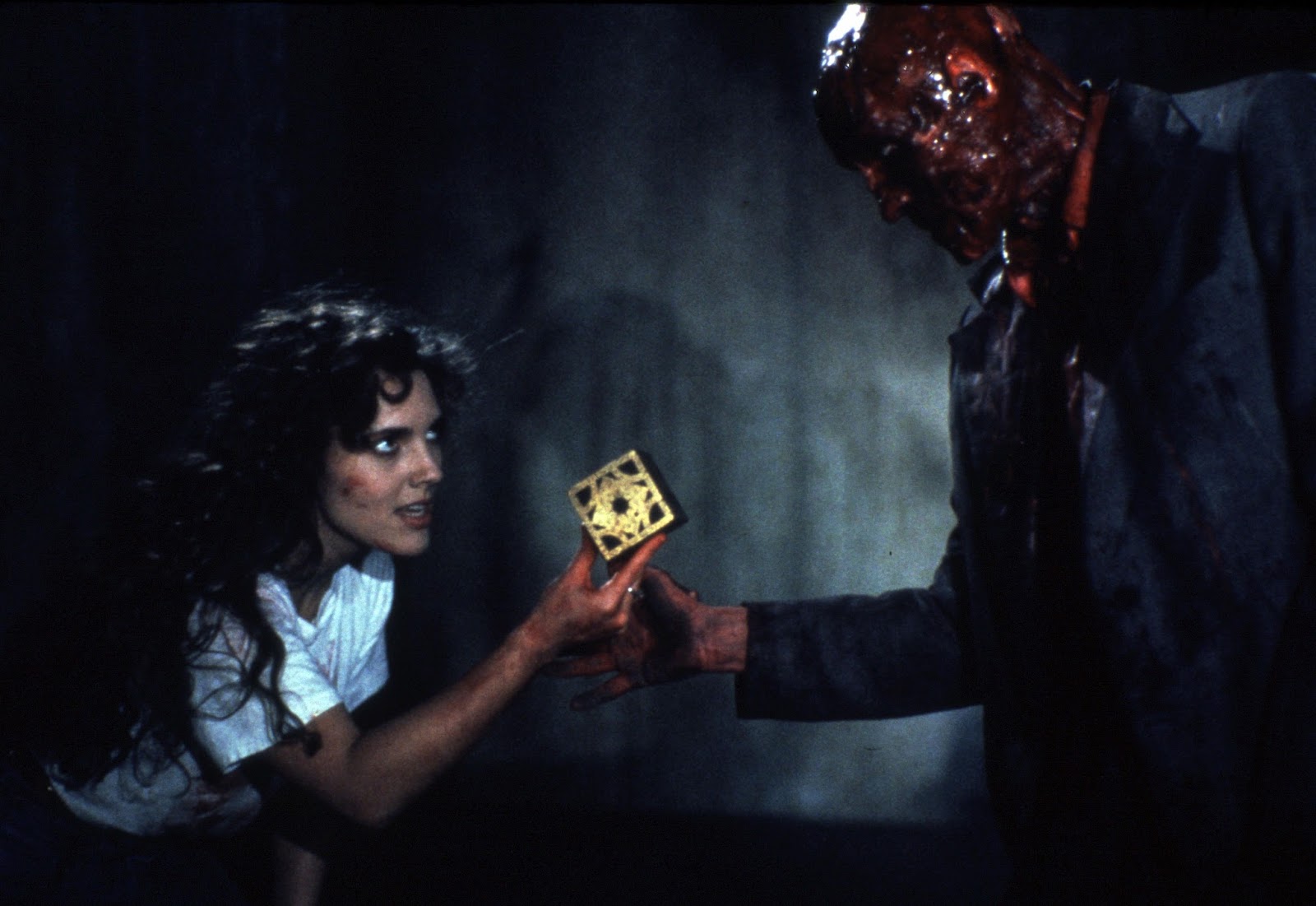 See, Frank likes to deviate into the realm of taboo and pain, not much different than the world the Cenobites occupy. Throw in the subplot where Frank is secretly sleeping with his brother’s wife and you have yourself a real shithead. This relationship between Frank and Julia, though, is the real conflict that kicks the plot into overdrive and sets up our characters to spiral down the horror tube.

For a movie filled to the brim with the lowest of people, it only makes sense for the world they occupy to look as bad as they act. Thankfully, Clive Barker, the master at making horror look as ugly as possible, gives us a peek into the world of Hellraiser: a world occupied by dark and claustrophobic hallways, dimly lit rooms, and an overall black tint to everything. In trying to make everything look as disgusting only he could achieve, Barker managed to craft one of the most gorgeous and unique looking horror films in existence.

The world of Lovecraftian horror is occupied by a lot of different tales of the macabre, but most don’t do it as well as Hellraiser. With top notch demonic designs and characters that are so bad we couldn’t possibly forget about them, Clive Barker crafted an other worldly tale about the dangers of fantasies and what lengths people will go to make their truest pleasures come alive. Hellraiser is a cautionary tale while also a tragic love story much like the Gothic tales of yesterday, one that gets overshadowed sometimes by the not-so-good legacy it created. Don’t watch the sequels; just watch Hellraiser, and leave it at that.