Noise can be hallucinatory experience. I remember listening to My Bloody Valentine’s Loveless for the first time in high school and hearing these blurry melodies behind the feedback that I’m pretty sure didn’t actually exist. There’s plenty of other artists that have managed to create the sensation of this ‘ghost melody’ (Tim Hecker and Jefre Cantu-Ledesma just to name a few). Hardware techno savant Helena Hauff has managed to pull off a similar feat with rhythm. Through explosive noise, Hauff corrodes drum machine sounds into a thick sonic sludge.

There’s no easing into this album. From the get-go we have a swirl of disorienting 808s blasting through the mix on ‘Barrow Boot Boys”. In terms of how the drum machines are constantly shifting and telling the story, Hauff brings to mind another master of rhythm, Jlin. ‘Lifestyle Guru’ delves into similar drum textures but explores a gritty acid inflected synth melody that weaves around the rhythm.

The album really hits its stride on the squelching techno banger, “Hyper Intelligent Genetically Enriched Cyborg” where Hauff brings each component previously explored on Qualm and assembles them into an absolute odyssey. Later tracks such as ‘Primordial Sludge and ‘It was All Fields Around Here When I was a Kid’ dabble in slowed down tempos and ambient atmospheres, forgoing the ice-cold futuristic landscapes from earlier in the track list. 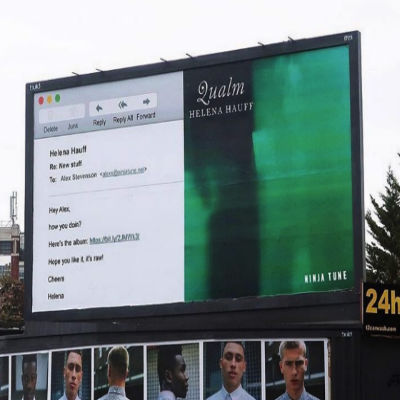 A billboard popped up in London to promote the release of Qualm earlier this month. The design was to the point. It was just an email sent by Hauff to her label with a bitly link to her album.

She’s wasn’t joking. If you’re looking for polished dance music – fuck, if you’re looking for just edited dance music, or even dance music that was made in more than one take, you’re best checking elsewhere. This is the real deal, warts and all. It’s a fascinating record for the gearheads out there, but it might not sit well with someone that doesn’t have an interest in the process behind the music. To those who go to live shows hoping for chaos, however, this album is an absolute treasure.

Liked it? Take a second to support Nathaniel Lewis on Patreon!