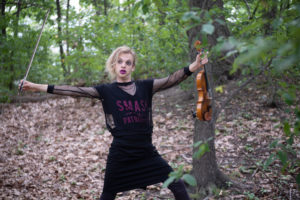 Boston-based Flight or Visibility released the video for their track, “My Name (is Joanna). The track is an anthem of self expression, self identification, and a declaration of visibility. It encourages self-advocation, and in a way, self-care. The song says I’m here on this planet, I’m a human with a story, and now with this name you can see me. I feel that we all need a song like this especially when we transition to post-pandemic life and everything is tangible again. The fighting won’t come from behind computer screens. “My Name (is Joanna)” teaches us not to be scared but to assert oneself, express who you are freely. It’s an incredible message to everyone during these uncertain times.

What were/are your influences (growing up as well as currently) that led you to become who you are musically/artistically especially since your sound is so distinct?
I always struggle with this question because I feel like the musicians in the forefront of my mind change periodically and I feel guilty about leaving people out. Musically, I grew up playing classical and klezmer and then as I got older, I started playing jazz, funk, and 60’s/70’s era R+B. I have also sung quite a bit of folk choral music. I think the music I listen to regularly or have listened to frequently in the past helps create a basic sound world, but my primary emotional influences are the people I hang out with and the people I play music with. When I spend a long time in a band with another songwriter, I notice my songwriting style drifting towards my collaborator’s. If I attend regular shows featuring the same friend, I also start to notice similarities. Before the pandemic, I always had the friends I was making music with or who’s shows I was attending in the forefront of my mind when asked this question. These folks include Anaís Azul, Surefire Cure, Genie Santiago, Itai and the Ophanim, Ava Sophia and so many more.

An average night in the woods.