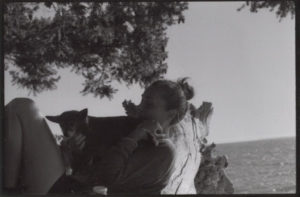 Pacific Northwest’s Liz Harris- known creatively as Grouper- released her 12th EP, “Shade,” and I would describe it as 35 minutes and four seconds of a total spiritual retreat.  This album is a follow up to the 2019 collaboration with visual artist, Marcel Weber- “After its own death/Walking in a spiral towards the house”- under the moniker Nivhek. Unlike the latter, “Shade” is a patchwork of years of material, stitched together by cavernous vocals and acoustic strums that create a sort of scrapbook; one that catalogues self-development through existential reflection. These ballads are a perfect balance of minimalism, complication and experimentation.

Listening to the album from start to finish, I found that the progression of songs closely mirrored a narrative arc and “Followed the Ocean,” was a solid exposition. Grouper’s trademark vocals-delicate yet haunting- are ushered in with the crest of a wave and ripple out into, “Unclean Mind”. The gritty and murky introduction juxtaposed with gentle assertions are a perfect depiction of being buried under the weight of the world while also carving out and protecting your place in it. This opening sets the thematic tone of the album and invites listeners to open up and reflect on what it is that crushes us separately.

The follow-up track, “Ode to Blue,” turns inside-out into, “Pale Interior,” in a way that transforms the longing calls to seek closure into finding internal resolve within the walls of one’s self.  Interlacing meaningful silence into reassuring vocals delivers a sense of tension that exists between yearning for others while finding comfort in isolation. Throughout these tracks though, what struck me as the most poignant was the sound of fingers unapologetically sweeping across guitar strings. This form solidified our suspicions of the haunts around us, ones that are much closer than we realize.

The climactic “Disordered Minds” is a standout and easily my favorite song of the album. This track leans more towards an experimental, synthesized sound and the varied frequencies create a sort of auditory illusion, one similar to that of binaural beats. The stacking intonations become personified and materialize as shadows dashing through the dark hallways of the mind. A callback to the dichotomies in “Follow the Ocean,” and a foreshadowing of the layers we see in, “Basement Mix,” this friction once again builds up only to melt back again into the tracks that follow.

A reference to Kelso, WA, “Kelso (Blue Sky)” is a beautiful bookend that provides a stark-but light- contrast to the album’s exposition. This is the most expansive and extended track of the album, one that seeks resolution through spacious contemplation and acceptance. Meditative in nature, there’s a sense of freedom in flight that is in direct opposition to the pressure felt in “Followed the Ocean.” It’s a personal invitation, one that encourages us to emerge from our blue and venture into the line that lives between sea and sky.