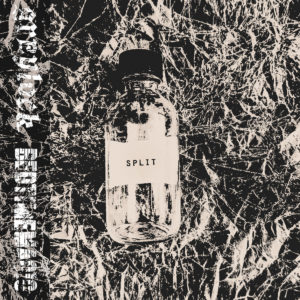 Local heavy hitters Greylock and BEDTIMEMAGIC have come together to create a veritable explosion of sonic delights.  Both duos have worked to create a split that is both a distinct representation of their own sounds and still a cohesive album in its own right.  Both bands trade off covers, furthering the mission of a fully realized meeting of the heavy minded.  If you are unacquainted with either of these local metal pushers get ready, they are only getting started.

The SPLIT opens with a slow brooding ascent into the fuzzed out riffs of “Do Not Revive”.  The blown out toms and unique vocal recording (purportedly recorded in a clandestine warehouse hallway) gives the track a lot of depth. Greylock went all out in support of the split and premiered a fantastic music video for “Do Not Revive” via Cvltnation!  Prepare to get up close and personal with the band’s vocalist and string-slinger Mike. The album picks up the pace with the hard driving “Pusher” and doesn’t let up.  In “King Size” Greylock puts their own spin on this BEDTIMEMAGIC cover in a way that really ties the collab together.  This side of the split ends with “Amplified Nothingness”, transitioning from the bleak pulsing sludge of Greylock into the noisy hardcore grinds of BEDTIMEMAGIC!

Boston based power duo BEDTIMEMAGIC rips into the bottom half of SPLIT with the raucous “Shuteye”, the piercing vocals evoking the spastic stylings of The Locust meets a meatgrinder.  In keeping with the split’s meeting of the minds, BEDTIMEMAGIC covers Greylock’s “Wagon Jumper” off the band’s 2019 album Trembling in a Hospital Gown. The cover is noisy, hard hitting, and spacious in the best way.  The album persists on with two fast in your face tracks that keep the pace of the split fresh and furious.

SPLIT releases today with support of some great merch and bundles of goodies via Tor Johnson Records.  In addition, be sure to check out the fantastic music video at Cvltnation!

Liked it? Take a second to support Art Tuttle on Patreon!