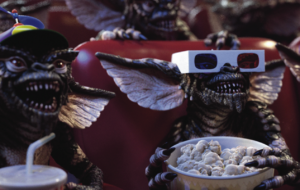 Gremlins spins the story of Billy Petlzer, the son of a struggling inventor, who receives a mysterious Christmas gift from his father. The gift is a mogwai, a tiny furry creature with big eyes and a big heart. Billy names him Gizmo, but is told by his father that there are rules to having a mogwai: do not expose it to light, don’t get water near it and most importantly: never feed it after midnight. As Christmas approaches, the nights get snowier, and Billy’s friendship with little Gizmo deepens, these rules will be broken– with dire consequences.

Gremlins is a film I watched as a kid endlessly as Christmas approached. I remember being six or seven and my mom showing my brother and I this film because, as she said, “it’s a classic.” She was right. It’s an amazing, campy Christmas flick that is for horror fans and kids alike (or, hey, maybe both). It’s a great starter “horror” for kids if they’re just starting out. It’s a regular on the ABC Family 25 Days of Christmas. Don’t miss this classic on the big screen!