Mostly recorded on an Optimus Karaoke machine and partly recorded on a (free, nearly broken) quarter inch tape machine, Greef’s Afternoon Songs (2018) released by Erased! Tapes is the one of the lowest lo-fi recordings that I have ever heard. 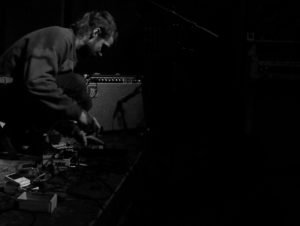 There’s so much fuzz in the songs, you could make a teddy bear with the album and still have some left over for counterfeit clouds in the sky. That being said, the songs are still wholly comprehensible, and heartbreakingly so.

When listening to this, you think that Afternoon Songs was recorded in 1985 on your friends’, cousins’ tape deck that their parents donated to a Nebraska Goodwill after they left for college — only to be foraged in Maine 30 years later, copied on cassettes, and released on an indie label to the appreciation of musical antique hunters.

But that’s not at all what happened.

Afternoon Songs doesn’t sound like it’s from this year, let alone this decade. I have no choice but to wonder why Greef chooses this archaic method of recording. In 2018, recording quality on your iPhone is better and infinitely more accessible than a 25 year old karaoke machine for which you have to comb the throngs of eBay to find. You have to actively TRY nowadays to sound this bad, whereas in the 80s and 90s, you just grabbed whatever recording device was around since it was cheaper and a little more punk.

Greef’s Pete Swegart crafts songs in the breath of Eric’s Trip, though this collection sounds more electric and perhaps more brooding (if you didn’t think that was possible, it definitely is).

Untimely synth and drum bleeps add to the overall melancholic, solitary sound of this record (listen to “Stone Bench”) like someone is journaling their intimate thoughts through sound.

Most of the songs on Afternoon Songs are short and understated. They’re not meddling creatures. Some of these tunes end abruptly, feeling like the closing of a door in one’s face, but with more of a gentle, familial push than a slam.

Some songs are more haunting like “A Decadent Ride”. It is a jarring and disturbing experience, like watching a haunted house from the side of the road. Swegart uses steampunk and noir images through the lyrics to match the mood, like lace gloves, leather steering wheels, lipstick lines, pine trees, cigarette smoke, and low roads to complement the haunting music.

Swegart also provides insight into the crisis of becoming an adult that most feel during their early to mid 20s. In “Stone Bench”, Swegart sings, “It’s time to fold up all of your clothes / And purchase clear plastic bins for storing.”

There are also other gems like “My Best Guitar Solo 10/05/17”, a mostly instrumental track with some spoken word vocals layered on top of the recording. Swegart documents an important moment in his musical career, and the song becomes metaphysical as you realize that maybe this song has no meaning after all, and is rather a cultivation of the artist’s years of practice.

Afternoon Songs is rustic, almost pastoral, and the perfect soundtrack to spend a lonely, warm afternoon with.