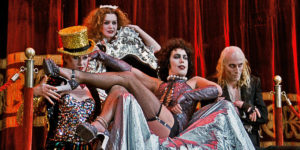 Ahh, yes… The Rocky Horror Picture Show. The beloved movie that shocked all when it came out in ripe 1975.

The film begins with the story of Brad and Janet, a recently engaged couple who find themselves stranded in the middle of nowhere during a storm. Soon, they discover the eerie mansion of Dr. Frank-N-Furter, a scientist who also happens to be a transvestite. Through elaborate dances and rock songs, Frank-N-Furter shows them his most recent creation: a blond, muscular man named “Rocky.” While Frank-N-Furter originally created Rocky to be his own man-candy, suddenly Rocky begins to take an interest in Janet. And this is where things start to get really crazy.

However, The Rocky Horror Picture Show gives us more than quirky characters and fabulous songs and dances to accompany them. It gives us a view into how our sexualities are severely repressed living in a heteronormative, patriarchal society. We see this when Frank-N-Furter introduces Brad and Janet, two seemingly straight, repressed, and uptight people, into a world of sexual pleasure and hedonism. Brad and Janet are used as characters that represent the audience the movie is meant for, while Frank-N-Furter and his gang of queer minions represent the ever-beautiful queer community and how it breaks open the shells that toxic heteronormativity has forced people to stay in by encouraging diversity, sexual pleasure and unapologetic self-expression. 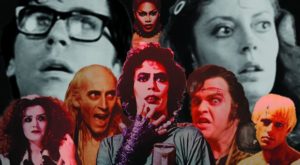 So, in the end, The Rocky Horror Picture Show is a MUST-WATCH for any and every cinephile. Not only is it a cult classic that is the perfect start, middle, and end to any October, but it’s also an unapologetic expression and celebration of sexuality and queer identity.

And if that’s no reason enough, just listen to the music, do the dances, look at the wardrobes, and pick at the cinematography all you want… but you are SURE to fall in love with this film as much as I did once you get put under its spell.

Also screens Saturday, 10/30 @ Somerville Theatre with a live shadowcast by the Tesseracte Players!