Mike Nichols ought to be credited as a founding father of the “Ok, Boomer” epigram. His classic 1967 film The Graduate reeks of the now-cliched refrain – both from the perspective of the Silent Generation and, retroactively, as a millennial viewer.

The Graduate was among the first wave of “New Hollywood” films. These films were irreverent, lower-budgeted alternatives to the family-friendly studio spectacles that had previously dominated Hollywood. Though they were more complex and sophisticated than many of their Old Hollywood predecessors, the films of the New Hollywood era were not entirely subversive. Rather than overturning the very nature of filmmaking, “New Hollywood” redefined the standards of what was permissible within the existing system. Despite the fact that major studios initially refused to fund The Graduate’s production due to its subject matter, the film wound up dominating the 1968 Academy Awards and has since become a film-school mainstay.

You could argue that the paradoxes of The Graduate’s production reflect the contradictions of its era. The Graduate came out amidst a world fraught with polarization and chaos. As the film was being made, military presence steadily increased in Vietnam, while Jimi Hendrix wrote “Purple Haze” and Muhammad Ali was stripped of his boxing world championship. 1967 was the “Summer of Love,” yet violent race riots and war protests broke out in cities all throughout the country.

The Graduate, however, does not overtly deal with any of this. Aside from the Simon & Garfunkel soundtrack, the world of Ben Braddock (Dustin Hoffman) is very similar to that of James Dean’s Jim Stark in Rebel Without a Cause (Nicholas Ray, 1955). Lurid colors saturate Ben’s vapid suburban existence, and blinding, washed-out sunlight accentuates his post-graduate depression. Ben sullenly disparages his parents’ materialistic, achievement-oriented worldview, but he is seemingly oblivious to the anti-war, women’s liberation, and racial justice movements springing up all around him. Ben’s affair with Mrs. Robinson (Anne Bancroft) is his only blatant act of rebellion, but it is something he succumbs to rather than actively desires. 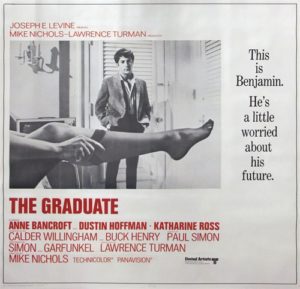 The validity of Ben’s disdain for his parents’ world is undercut by his involvement with the material luxuries that are its byproducts. His prized Alfa Romeo Spider is his parents’ graduation gift. His post-graduation hours are spent lounging in the pool in the backyard of their spacious suburban home. In “Just one… ‘Plastics’ Suburban Malaise, Masculinity, and Oedipal Drive in The Graduate,” Robert Beuka argues that the water Ben is so frequently submerged in is symbolic of his feelings of isolation and suffocation – which is accurate. It is important, however, to also recognize the material reality of Ben’s existence in addition to the symbolism of his psyche. Ben is so deeply enmeshed in the world he rejects that he cannot even recognize his own complicity. His delusion is such that he begins an affair with the woman who is most emblematic of this suburban malaise. Mrs. Robinson is Ben’s middle-aged, feminine mirror. She is both detached from, yet fully submerged in the world she and Ben occupy. She is as indifferent to her educational pedigree as Ben is to the prospect of a life working in plastics. Though Ben is too dense to be troubled when Mrs. Robinson states that she knows nothing about art despite having majored in it – “You probably just lost interest,” he says – one cannot help but draw the parallels between their shared apathy. 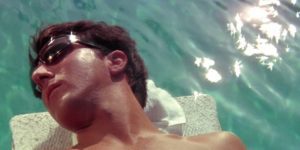 By the time we meet her in The Graduate, Mrs. Robinson is resigned to her bourgeois fate, whereas Ben is still processing. He is reticent to enter the workforce or go to graduate school, per his parents’ demands, but he appears to have no notion of alternative options. Ben also has no meaningful outlet for his rebellious inclinations. I regard Ben as the worst-case scenario hippie. From the perspective of his parents and likeminded adults, he embodies all the most objectionable elements of the 1960s countercultural movements and its participants, without any of the idealistic virtues. He is directionless, impulsive, and contrary, but without any purpose aside from the act of subversion itself. Ben is only compelled to break free when he becomes infatuated with Elaine Robinson (Katherine Ross). Yet the sincerity of his passion is dubious at best. After all, his mother-lover, Mrs. Robinson, deeply objects to the union – and what could be more arousing than that? The film’s only moment of authentic rebellion is when Elaine decides to leave her new husband at the alter to run away with Ben. As she ponders how to respond to Ben’s bellows, everyone around her – her mother, father, and new husband – yell at her, yet no sound comes out of their mouths. The “sound of silence” in that moment, and the emptiness she knows her life will contain if she stays with her husband, becomes too much to bear. At the apex of her desperation, she runs to Ben. Mrs. Robinson yells at her that “It’s too late!” “Not for me,” Elaine replies.

Though the couple is triumphant as they run onto a bus (Ben’s car broke down along the way – a momentary distancing from his past life), their expressions gradually shift to bewilderment and despondence. Without the act of rebellion itself, they are once again without purpose. Mike Nichols said in interviews that Ben and Elaine are doomed to occupy the same lives as their parents. In this sense, their plight is an echo of the ’60s countercultural ideals. Though the era began optimistically, ideals could not withstand the power of greed, the formidability of political and social opposition, and the inevitable erosion of radical thinking that comes with age. As we are now all too aware, the “baby boomers” became the greatest traitors to their own cause. See next: The Big Chill (Lawrence Kasdan, 1983).

Liked it? Take a second to support Julia Biederman on Patreon!