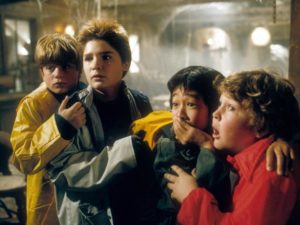 Finally! Drive-ins are slowly coming back, and this time they’re coming at you with The Goonies.

The Coolidge (once again setting up stakes on the grounds of Medfield State Hospital) brings you a story about a little boy who finds his courage, a caring older brother, a technological kid-genius, a mischievous big mouth, a clumsy glutton, and a pirate’s treasure on which their very fates rely on.

The Goonies is a film about a group of misfit kids who embark on a pirate treasure hunt in 1980s Oregon in an effort to rescue their homes from foreclosure. The film speaks about the failed attempt of one man named Chester Copperpot to find the treasure of the local legend of One-Eyed Willy, a pirate who hid mountains of gold somewhere in Astoria. Now, a kid named Mikey pledges to find this treasure with his friends to recover his home. In this way, the story brings into sight that these kids finding the map and pursuing this treasure was completely, for lack of a better phrase, meant to be. 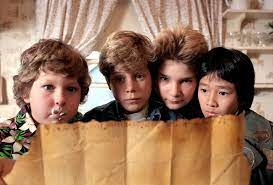 However, The Goonies is more than that. When we come to think about it, this film is about a lot of things. It’s about the dream of a man (Mikey’s father) to go on a treasure hunt as a child, but eventually growing up, losing those hopes and dreams of his childhood. It’s a coming-of-age film where the characters fight against a type of gentrification and triumph against all odds.

It’s also about the kids being the ones who have to save their parents, even though parents are expected to be perfect superheroes. But most importantly, it’s about the dream of these kids to save their very childhoods. It’s a we’re-never-growing-up movie, meaning they won’t let the figurative shackles of adulthood dim their inner light or crush their childlike wonder.

It speaks about a now-or-never situation in which the kids get to truly embrace their power to create the change they desire in their lives—with Donner giving us amazing storytelling about their way of getting there. 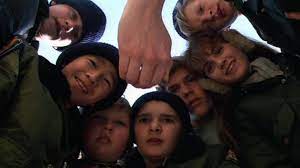 From its inspiring soundtrack to its beautiful landscapes, The Goonies is such a powerful film because of its ability to evoke nostalgia and wonder in its audience. It inspires us to be different, to stand up for what we believe in, to never give up, and that no matter how small— we can make a change.

The Goonies has it all: A budding romance, adventure, crime, comedy, wild car chases, and a group of kids who beat the odds one man couldn’t.

So hop on for the ride of your life that’s been touching our hearts since 1985. Watch it at Medfield State Hospital this Friday, August 27th and Saturday, August 28th both at 8pm!

Part of the proceeds collected from the drive-in are going to be invested in caring and maintaining the hospital.

We’ll see you there!