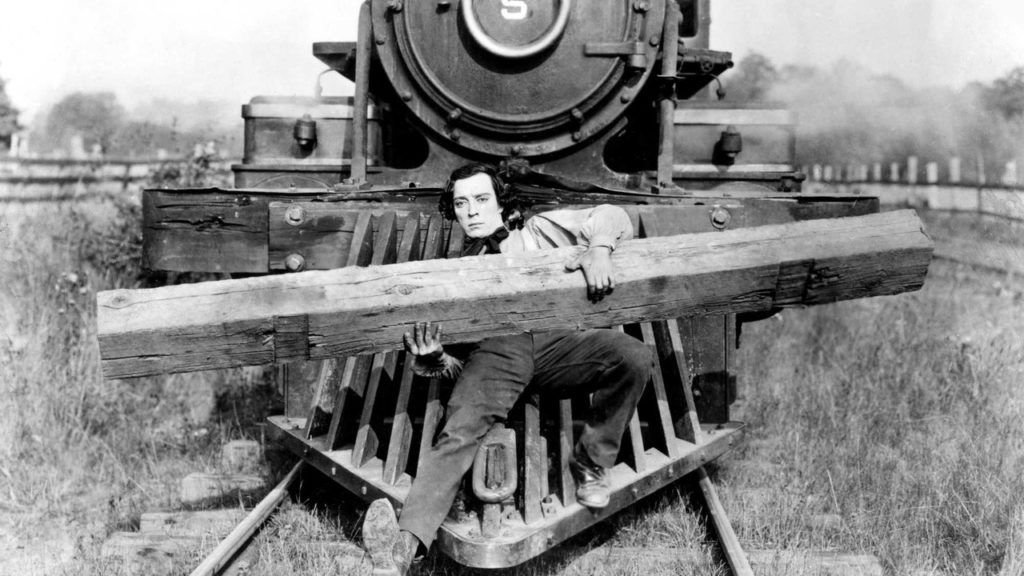 Among fans of silent film, one question has persisted nearly since the dawn of cinema: Chaplin or Keaton?* The two actor-directors dominated the world of silver-screen comedy in the silent era; both cut iconic figures in front of the camera, and each proved a formidable director with a series of increasingly ambitious features. I don’t know if I could personally answer this question definitively, as both created their share of films which mean the world to me. But if the question is who’s funnier, my answer is easy: Keaton, in a walk– or perhaps a pratfall.

I have been revisiting Keaton’s work recently (inspired by Dana Stevens’ excellent new biography Camera Man: Buster Keaton, the Dawn of Cinema, and the Invention of the Twentieth Century), and the thing that strikes me is how modern he sometimes seems. Keaton, of course, worked nearly a century ago, and his films are very much products of their time; location footage serves as a window into a long-lost world, and some of the sight gags (especially those involving women and minorities) will prove appallingly dated to modern eyes. Yet watching Keaton himself feels at times like looking at a time-traveler. His expressively blank face anticipates the Jim Halpert stare, and his deadpan timing would feel right at home in any number of modern cringe comedies. Silent film acting was borne of the play-to-the-rafters Vaudeville tradition, and many of the earliest movie stars conveyed emotion via larger-than-life facial expressions.Keaton, meanwhile, intuited the power of the closeup, and could elicit laughs or heartache with a single blink.

This is not, of course, to say that Keaton’s films were minimalist. On the contrary, Keaton specialized in physical comedy setpieces on such a large scale that they practically defy the laws of physics. Nowhere is this truer than in his 1926 masterpiece The General, which screens tonight at the Coolidge. Based on a true story of Civil War derring-do, The General stars Keaton as Johnnie Gray, a train engineer and would-be Confederate soldier who must protect both his locomotive and his true love from Union forces.** Like Mad Max: Fury Road, The General consists almost entirely of an extended chase sequence– first one direction, then the other– and, also like that film, it contains some of the most jaw-dropping stuntwork ever committed to celluloid. 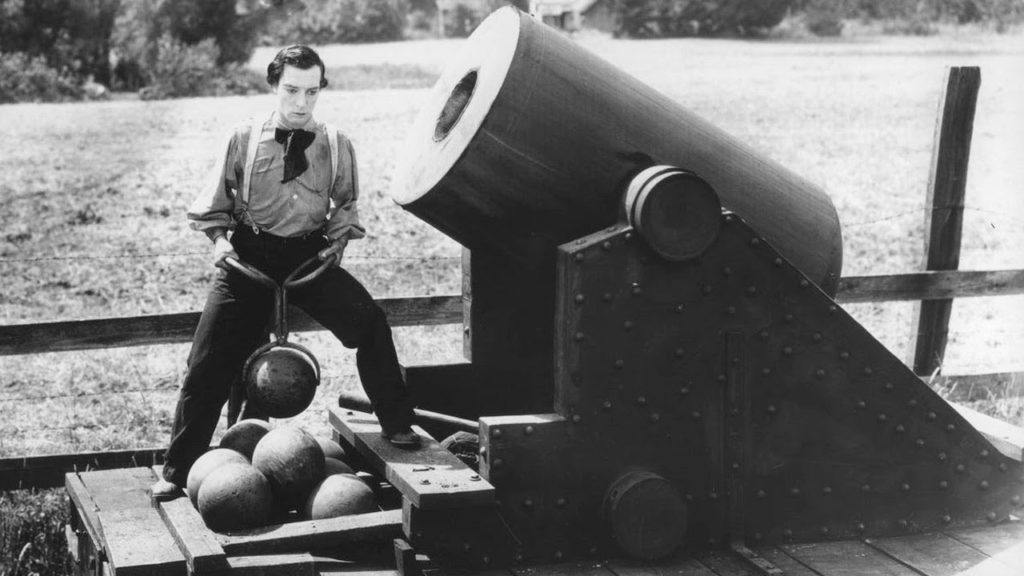 From his earliest days as a child star on the Vaudeville circuit, Keaton built his name on his apparent indestructibility, allowing himself to be tossed like a ragdoll while somehow breaking neither character nor his body. To achieve the effect of the titular steam engine in The General, Keaton strapped himself to an actual, working steam engine. When Keaton runs in front of the train to hastily lay down pieces of track, he is actually running in front of a moving train. The General is often a riotously funny movie, but it works just as well as an honest-to-god action film. The famous climactic scene, in which the train crashes off an actual bridge into an actual ravine, was at the time the most expensive single shot in motion picture history. (Not having any way to retrieve it, Keaton and his crew left the wrecked engine at the bottom of the cliff, where it remained a tourist attraction for decades until it was pillaged for scrap iron).

Truly silent comedy, as Keaton practiced it, is as lost an artform as any of the past century, rendered almost instantly obsolete with the advent of sound cinema in the late 1920s (though a handful of silent stars, such as Laurel and Hardy and, to a certain extent, Chaplin, weathered the transition, Keaton’s career was functionally over following a string of dire talkies). But, more than nearly any of his contemporaries, Keaton’s influence is still easily noted in the modern world of entertainment, manifesting in everyone from Mr. Bean to Jackie Chan to Johnny Knoxville. And while Chaplin’s most famous scenes are so thoroughly ensconced in popular culture that they’re difficult to approach on their own terms, Keaton’s still feel as fresh and surprising as the day they were shot. If you’ve never seen The General, tonight’s screening at the Coolidge will provide optimal conditions: live musical accompaniment courtesy of Jeff Rapsis, a post-film conversation between Stevens and former Globe critic Ty Burr, and, almost certainly, a lively and engaged audience. Silent films were rarely really silent, after all; watching at home only provides half the experience.

* – Some will include Harold Lloyd in this calculus, but in my experience the Safety Last star almost always lands in a comfortable third place.

** – It should go without saying that, from today’s vantage, Johnnie’s allegiances are unsettling at best. Mercifully, unlike such other silent war films as Birth of a Nation, the central conflict of the Civil War is largely rendered an abstraction, and the film for the most part abstains from racial caricature. Keaton was, by all accounts, apolitical– perhaps frustratingly so, particularly when compared to the outspokenly progressive Chaplin– and likely didn’t think through the implications of the story beyond its potential for humor and spectacle. Still, the fact remains that this is a film in which the Confederacy is portrayed in a heroic light, so proceed with all due caution and critical scrutiny.