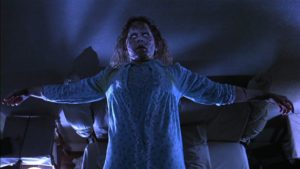 Forty-eight years on, The Exorcist still makes audiences run for the exits.

“It still happens, every time we show it,” says Mark Anastasio, the Program Manager and Director of Special Programming at Coolidge Corner Theatre. “Its influence is huge. It’s an absolute masterpiece of a film.”

Tonight, in celebration of the start of Halloween week, Coolidge Corner Theatre presents The Exorcist: The Director’s Cut. A must-see for every horror fan, The Exorcist has become iconic, creating a powerful, passionate legacy that has influenced modern horror and solidified itself as a classic. Nominated for 10 Academy Awards, William Friedkin’s masterpiece has stood the test of time and continues to be a cinematic landmark.

The film—based on the novel of the same name by devout Catholic William Peter Blatty—chronicles the possession of a lonely young girl, Regan MacNeil (Linda Blair), who lives with her mother, actress Chris MacNeil (Ellen Burstyn) in Georgetown, Washington, D.C.

On a blustery October evening, shortly after moving into the new house, Chris notices odd things happening at night. There are loud thumps coming from the attic, there’s scratching in the walls, Regan’s bed shakes on its own, and the air in her room is ice cold. Soon, Regan is hurling obscenities and deep, thick scratches appear across her face—leading Chris to believe that Regan is not her daughter anymore. With nowhere else to turn, she desperately seeks help from two kindhearted priests, Father Lankester Merrin (Max von Sydow) and Father Damien Karras (Jason Miller).

So, how has The Exorcist stood the test of time, despite such progressions that have been made in the horror genre?

“I think that a lot of people still have very deep-rooted fears and beliefs that their various religions have instilled in them,” Anastasio says. “Catholics especially—like me—are more likely to avoid this film at all costs. They account for most of the audience members that run for the doors.”

The Exorcist is many things—terrifying, thrilling, often referred to as “the scariest movie of all time.” Above all, though, it’s emotional and poignant—something that audiences don’t realize going into the film for the first time. Despite its demonic reputation, The Exorcist shines a positive light on Catholicism. Its heroes—some of my favorites in cinema—are priests, and its message for the audience is that good will always conquer evil. The acting from both Miller and von Sydow is gripping and sorrowful and will stick with you long after you’ve left the screening.

Catch The Exorcist: The Director’s Cut tonight at the Coolidge Corner Theatre to kick off your Halloween week right!