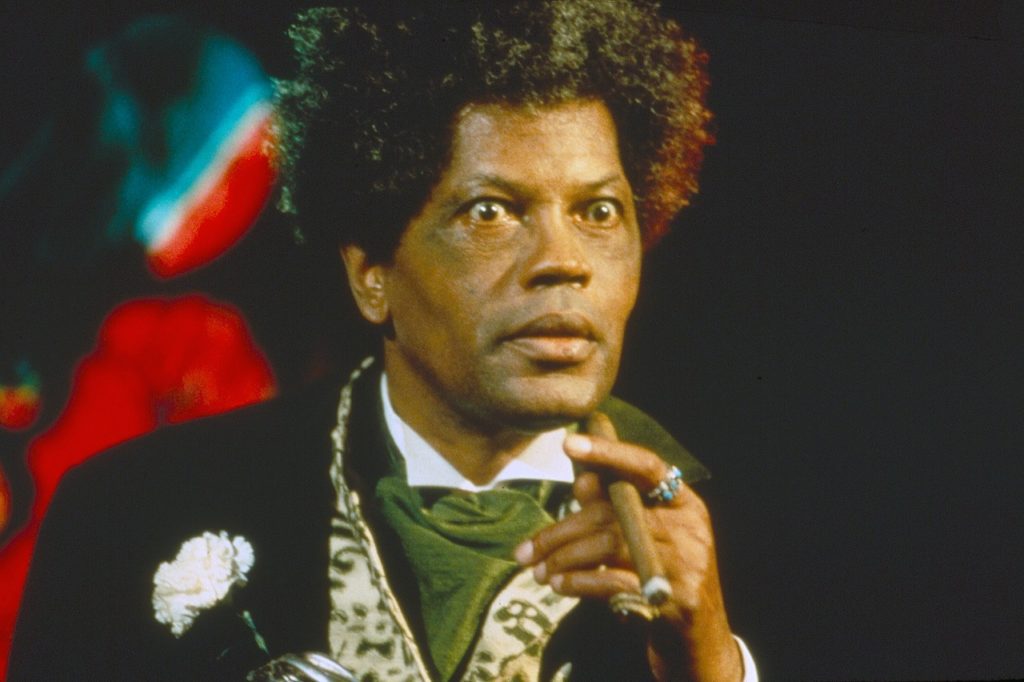 Some things are too hopeless for tears, and at times too austere for comedy. Tales from the Hood (1995) — screening midnight Friday at the Coolidge — knows this, and instead of aiming for the audience’s hearts or lungs, goes directly for the nerves, turning an initial late-night saunter through a mortuary into…well, the only thing a late-night saunter through a mortuary can be. As is whispered by Mr. Simms (Clarence Williams III), the haggard undertaker acting as the guide to the trio of drug dealers pestering him, “Reality is a matter of perception,” and it is this aphorism which lies at the center of the film.

Tales from the Hood is a collection of vignettes that confront various interconnected social issues such as police brutality, the vulnerability of black children, monsters masquerading as politicians, and gang violence. Each story begins with the opening of a casket, and a momentary lingering on the stony visage of a lifeless black face– an image so deeply etched into American culture that the characters, as well as the audience, initially think little of it. But as Mr. Simms starts to spin his yarn, and as these corpses (as well as a doll) are imbued with narrative, character, and agency (or the illusion of it), we witness unravel the events that eventually lead them to their demise.

A mixture of Cronenbergian body horror and Twilight Zone suspense, Tales from the Hood‘s execution is only half the appeal. The social commentary gilded beneath is at times subtle, and other times comes screeching through with the undistilled clarity of a Public Enemy album, yet nevertheless is fitting for its respective story. The film properly vacillates between a much-needed tenderness seldom applied to black characters, and a much-needed brutality that is often pulled when addressing the entities deserving of it– a small quality that distinguishes the movie beyond its subversion of common horror tropes.

The same praise can be transferred onto the performances as well. Clarence Williams III’s Mr. Simms is just the right amount of Doc Brown mixed with Colonel Kurtz to be both not indulgent, but also very indulgent when needed. The latter moments result in some of the campiest scenes I’ve seen thus far (Just how many times can you say “shit” without it getting boring?).  The trio of interloping drug dealers — Stack (Joe Torry), Ball (De’Aundre Bonds), and Bulldog (Samuel Monroe Jr.) — despite their peripheral roles, perfectly temper Mr. Simms’s campiness, often pointing out the absurdity of it all. The same can be said for the actors in the stories that fill the spaces in between, making the movie what it is.

Tales from the Hood is a film with various distinct qualities that accrete around its original mission of being a horror anthology– an intent beautifully executed. However, within this execution, Tales from the Hood doesn’t mistakenly use horror as a means of vindicating us from our reality. Instead, it makes the responsible decision to use it as a way of further affirming the tangible and imminent horrors that exist around us. This tactic, which by now has become routine and frankly trite, still manages to feel novel with every viewing, and sadly, but unsurprisingly relevant.

Liked it? Take a second to support Erwin Kamuene on Patreon!