Serial Mom could easily be interpreted as a campy member of the cinematic “suburban exposé” family. Since the last few decades of the 20th century, innumerable films and TV shows have endeavored to explore and expose what lies beneath the fragile veneer of suburban paradise and the nuclear family. Serial Mom’s premise is simple: Beverly Sutphin (Kathleen Turner) is a picture-perfect housewife living in suburban Baltimore who moonlights as the town murderer. When Beverly is not serving her family the “best meatloaf,” birdwatching, or corresponding with serial killers on death row, she is taking out anyone who violates her code of conduct. She also torments the exasperated neighborhood divorcee, Dottie Hinkel (Mink Stole), with a barrage of “obscene” prank calls. Soon enough, the local authorities, as well as her dentist husband, Eugene (Sam Waterston), and teenage children, Chip and Misty (Matthew Lillard and Ricki Lake), begin to connect the dots as more people associated with the Sutphin family turn up dead. Chaos, more murder, and a media frenzy ensues. 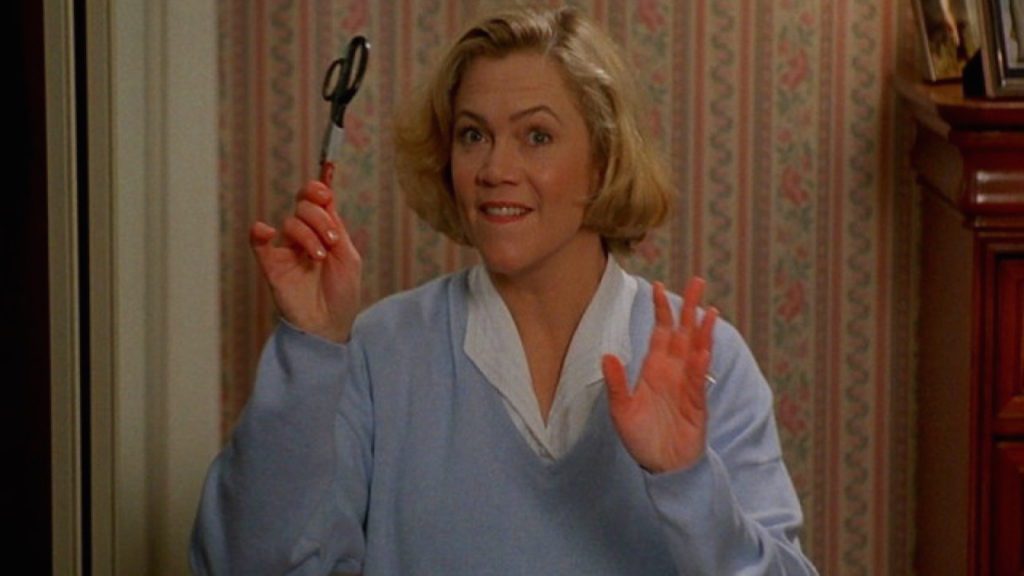 From a contemporary perspective, Serial Mom does not explore uncharted waters. According to Hollywood, something is always rotten in the suburbs. What sets Serial Mom apart is that the film is fundamentally disinterested in critiquing the dishonest nature of suburban niceties and the nuclear family. Sure, there’s a town pervert who vandalizes public bathroom stalls, a neighborhood busy-body who stiffs vendors at the local flea market, and a button-up detective who privately consumes transgender porn. The film doesn’t care about, or truly condemn, any of this. Colorful characters notwithstanding, the suburban Baltimore of Serial Mom seems like a perfectly fine place to live. In contrast, the viewer is warned within the first three minutes of David Lynch’s Blue Velvet (1986) that there is something sinister afoot in the seemingly idyllic town of Lumberton; the melodic opening sequence of dreamy suburban life is disrupted by a pan to the bugs writhing just beneath the surface of an impeccably watered lawn as its owner keels over in the throes of a stroke. In Serial Mom’s Baltimore, Beverly is the disruption – she is the writhing, murderous bug. And yet, she is not entirely the film’s antagonist. So, what’s going on?

I’ve heard the claim that Serial Mom is “criminally underrated.” I would add that, much like the film’s anti-heroine, this cult favorite (I’m not sure if it has quite ascended to the rank of “classic”) has also been criminally underestimated. Serial Mom was a favorite of mine as a young teenager, and I can see why. This go-round left me with a renewed appreciation for Waters’ satirical acuity – which, it turns out, extends far beyond the doldrums of suburban life. I was especially struck during my most recent viewing by the film’s third act, which centers on Beverly’s media circus of a murder trial. In a mere five months, Beverly has turned into a true-crime sensation and a folk legend. Her family has loyally rallied behind her as they peddle “Serial Mom” merch and negotiate a TV adaptation of her story starring Suzanne Somers. They’re not framed as greedy opportunists, however. The Sutphin clan is evidently as supportive and loving as the Cleavers.

What’s really at play in Serial Mom is the changeable nature of social mores and moral standards. In the world of the film, the consumption of slasher movies and serial killer literature are signs of psychological disturbance, until the killer becomes a celebrity who resonates with other suburban housewives. The death penalty is the obvious, righteous choice (“Capital punishment is already the law in the state of Maryland. So what are we waiting for, fellow Christians? Let’s just do it!”), until one’s wife is on trial for murder. The only character whose moral compass seems unflappable – however deranged – is Serial Mom herself. Throughout Beverly’s trial, she is constantly distracted by Juror #8, who consistently wears white shoes and it’s after Labor Day.  The ill-fated Juror #8 is portrayed by Patricia Hearst, whose name appears in the film’s opening credits. That should tell the viewer all they need to know going in: Serial Mom is not a proto-Desperate Housewives. It is not a film about the false pretenses of wholesome, middle-class life, nor is it a feminist critique of domestic servitude (sorry, Suzanne Somers). Serial Mom is a film about True Crime. It’s a John Waters joint, so ultimately Serial Mom isn’t terribly moralizing or intended as a cautionary tale. However, if you feel that the film’s portrayal of the public’s easily clouded judgment in the face of an attractive, charismatic murderer is sharply accurate, I wouldn’t disagree. If you find it incredibly eerie that Serial Mom was released five months prior to the highly televised O.J. Simpson trial, I would say, “Yeah, me too.” We may not all mow down our son’s math teachers with our station wagons, but we all occupy the media landscape that the O.J.’s, Ted Bundy’s, Beverly Sutphin’s, and our collective fascination with them built. 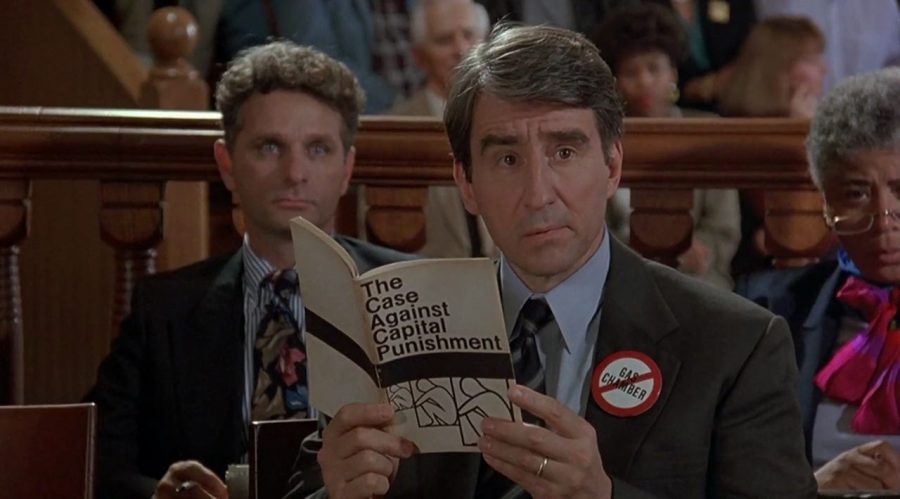 Serial Mom received mixed reviews at the time of its release. While I understand that John Waters’ milieu will never be for everyone, revisiting the film left me curious if it was just ahead of its time, or predictive of the times to come. In today’s parlance, maybe in 2022, Serial Mom will hit different. The best way to find out is to go see it as God and John Waters intended: on the big screen at the Coolidge Corner Theatre on May 17.

I had the good fortune to meet Kathleen Turner in 2009, when I was a freshman in high school. She was visiting my hometown to speak at a benefit for local, non-profit movie theaters. After her speech, I timidly approached her to introduce myself. I said something to the effect of, “You’re amazing, Serial Mom is one of my favorite movies.” She said something to the effect of, “That’s nice, dear” and asked if I would like to take a picture with her. Of course I did, and, luckily for me, I did not choose to stand on her bad side.

Liked it? Take a second to support Julia Biederman on Patreon!