Oh, yes. Scream. Another perfect addition to a spooky October.

Again, I’m not one for horror movies, but since Scream isn’t that terrifying but mostly just clever and binge-able, I really never get tired of watching it!

The film begins with its iconic opening scene, where Casey (Drew Barrymore) is caught in a sick game of horror movie trivia where she has to answer correctly or she dies. This kind of horror movie logic stays present in the film as the story then moves to Sydney Prescott (Neve Campbell), who lives in the fictional town of Woodsboro, California, where a series of murders have begun to be committed by a killer named “Ghostface.” Soon, all of the teenagers in Woodsboro are left questioning and analyzing the basic rules of horror movies and what it takes to survive in one, since they currently find themselves in a real-life one. 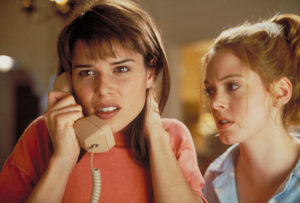 Although being used for much ridicule due to the performance of the “Ghostface” character (which I completely include myself in, it was hilarious), this film is actually really good. The twist at the end is amazing, and I haven’t seen anything like it ever since or before then.

The film is actually an homage to horror movies and the horror genre in general, since interest in horror in the ’90s had begun to decrease and movie shad begun to flop. This movie, however, brought it back to life!