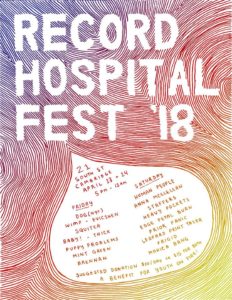 The DJs of the Record Hospital, WHRB 95.3 FM’s veteran underground music department, have only one rule: play music that you won’t find anywhere else on the radio. This year’s Record Hospital Fest on Friday and Saturday, April 13-14 at the Harvard Advocate, follows a similar rule, bringing together noise rock, hardcore, art-punk, indie-pop and more for a veritable who’s who of DIY music from Boston and beyond.

Each night of the fest will feature nine local and touring acts for only $10 a ticket ($15 for a two-day pass), with the money raised going to benefit local LGBTQ+ – inclusive drop-in center Youth on Fire. Night one features a rare Boston-area performance from NYC noisemakers dog, along with sets from wimp, Squitch, BABY!, Puppy Problems, evicshen (Victoria Shen of Trim), Brennan, Mint Green, and Brooklyn’s THICK, while night two offers sets from out-of-towners Human People, Anna McClellan, Staffers, Heavy Pockets and local favorites Edge Petal Burn, Prior Panic, Frigid, Monica Bang, and Leopard Print Taser. It’s not often you get to see a lineup this stacked around here outside of Hassle Fest!

As if seeing all these musicians wasn’t cool enough, you’ll also get to enjoy their sets in the same building T.S. Eliot used to hang out in! Please note that the Advocate can only fit about 75 people, so get there early to make sure you can see everything! If you’ve got a fever for exciting and eclectic underground music, Record Hospital Fest has got the cure for what ails you!