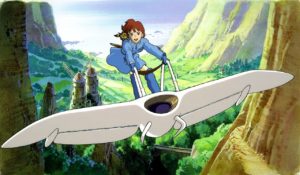 Inspired by Ursula K. Le Guin, Isaac Asimov, and other greats of science fiction and fantasy, it’s no surprise that Hayao Miyazaki’s Nausicaä of the Valley of the Wind showcases a vibrant world with a heroine who shines even brighter. 1000 years after the apocalyptic Seven Days of Fire, humanity fights to survive as a toxic jungle grows around them. A legend tells of a savior “clothed in blue robe, descending onto a golden field, to join bonds with the great earth and guide the people to the pure lands at last.”

In the Valley of the Wind, the courageous princess Nausicaä is an avid scholar, venturing into the jungle with her glider and protective mask. She has an affinity for all life forms, including the enormous insects which inhabit her world. The largest of these is the trilobite-esque Ohmu. While ordinarily docile, these creatures are capable of wreaking havoc when enraged.

When a military state assaults the Valley, Nausicaä learns of plans to destroy the toxic jungle using a humanoid bioweapon. These bioweapons, dubbed “Great Warriors,” begin in an embryo stage, so it will be some time before the Warrior is ready to decimate anything. As Nausicaä tries to avoid further bloodshed in the meantime, she is thrust into new portions of the sprawling jungle, revealing larger truths about the Faustian world she inhabits. She must rely on her intuition and the special connections she’s forged in order to not only survive, but give mankind a chance at redemption. 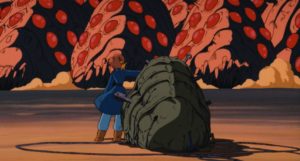 While this movie is not technically a product of Studio Ghibli, it is considered part of the Ghibli body of work. Nausicaä of the Valley of the Wind began as a manga by Hayao Miyazaki, published by Tokuma Publishing in 1982. After it became the magazine’s standout feature, Miyazaki agreed to create a film adaptation on the condition that he direct.

Despite being one of Miyazaki’s earliest works, Nausicaä reflects the trademark mix of whimsy and earnestness that made his films a global phenomenon. Themes of environmentalism, female independence, and the delicate balance between progress and tradition are present throughout. Nausicaä’s loyalty to all life forms makes her one of the most pure-hearted Miyazaki protagonists, but she is not without depth. Her struggle to maintain composure and stand by her values during intense conflict is deeply relatable and an inspiration to young nature-lovers.

Following the success of Nausicaä, Miyazaki and Tokuma Publishing joined forces to found the much-loved Studio Ghibli. Under Miyazaki’s helm, Studio Ghibli has gone on to create thoughtful and eye-catching films such as Laputa: Castle in the Sky, Kiki’s Delivery Service, Spirited Away, and Howl’s Moving Castle. After several failed retirements, Miyazaki is currently in the process of directing his “final” film, so now is an excellent time to catch up on any classics you may have missed.