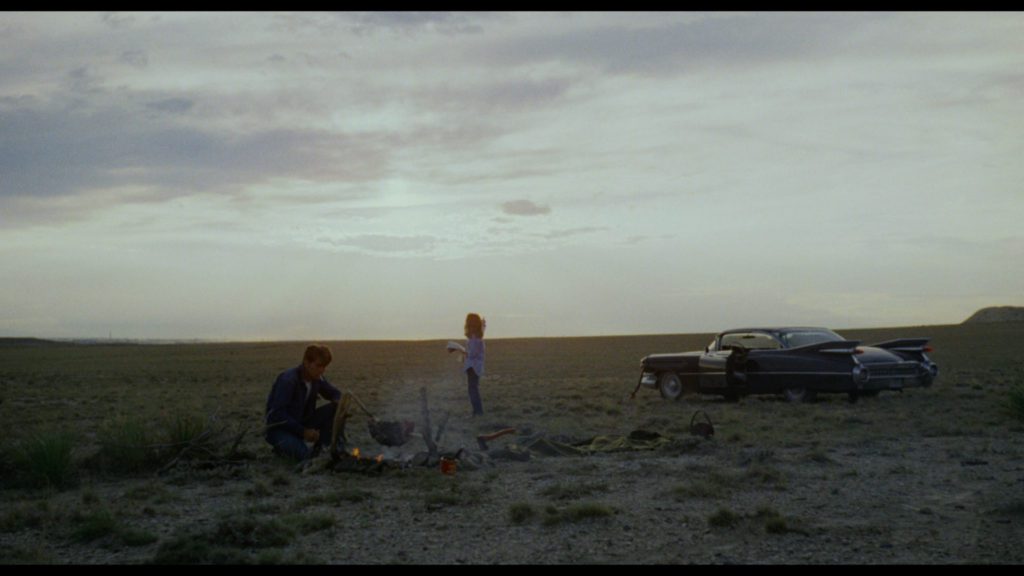 After a nearly fifty-year-long career, including a twenty-year-long hiatus and a prolific nine-year stretch of work in the 2010s, it’s clear now that Terrence Malick is a long-time believer in soulmates. The connections we have between each other are just as unbreakable as the world around us; nature keeps going just as much as romance does. In Badlands, one of the great films of the ’70s and one of my favorites, Malick lays the groundwork for this deeply human feeling which still runs through his films. It is evident that the spree of violence we see these young lovers embark upon only enhances their connection, while also asking in fascination how two young people with so much potential would do such a thing.

In Badlands, Kit (Martin Sheen) walks into Holly’s (Sissy Spacek, in only her second film ever) life, and their love is so instant it’s almost as if they were in a fairy tale. They’re already used to overcoming relationship obstacles–he is a garbageman and she is a high school student, after all*– and they’ll only find more later in their beguiling odyssey. When Kit shoots Holly’s dad (Warren Oates) after he disapproves of their relationship, the young lovers find themselves wrapped up in a killing spree, justifying subsequent murders as an means to not leave any witnesses behind. They seek refuge in the swamplands and run into a few nefarious characters. In the meantime, Holly matures right before our eyes, her distrust for Kit increasing; does he have any morals, or is he no better than any other criminal on the run?

Even though it is loosely based on the real-life 1958 murder spree of Charles Starkweather and his girlfriend, Caril Ann Fugate (yet still existing as its own original entity rather than a retelling of events), there still is a sense of dramatic irony to the end of the violence. We know that Kit will be caught, and then only assume he’ll receive the death penalty or jail time; it is never a matter of if he will be brought into authorities, but when.

Holly is exhausted from being on the run and turns herself into authorities, while Kit is eventually caught (but finds himself to be quite personable with authorities). Kit doesn’t have much of an explanation for the violence, nor does he express regret; he’s just focused on his own and Holly’s survival when the world around them seems limitless and grand. It’s the same kind of charm that draws Holly to him that sends him off to a death sentencing with a handshake and warm regards from the police. He has this handsome, “James Dean” quality to him that even one of the state troopers comments upon, giving him a haunted quality that makes it harder to find him unlikable despite being solely responsible for the crimes he’s committed.

Romanticization and fascination with true crime, and with the criminals behind them, are timeless. It’s intriguing to see Kit and Holly flee  aimlessly with no hideout spot in mind, instead hiding in plain sight. Kit is treated as a celebrity once he reluctantly hands himself over to law enforcement, which only makes more sense of why everyone is enamored with him as the film ages. We’re even more fascinated with criminals when even they don’t understand their motive. It brings a spontaneous and unknowing nature to violence that we sometimes don’t know why we do the things we do; in return, criminals can live on for their acts of violence.

Still, Badlands looks immaculate. It is not breaking any new ground to say Terrence Malick has a beguiling, mystical eye for capturing the world in its natural form. Every shot of the Montana great plains (care of the legendary Tak Fujimoto) feels like it has the warmth and endless possibility; even though the duo is on the run, they take a detour into the life they could have been living in a world where they aren’t wanted. Paired with the images from Badlands are two needle drops which are inextricably linked with the film: “Love is Strange” by Mickey and Sylvia and “Gassenhauer” by Carl Off, both of which offer more of the dreamy quality of the film’s romance while not quite placing it in any specific time.

Indeed, Malick tried to keep the period detail to a minimum. In one of the handful of interviews we have with him, Malick says, “Nostalgia is a powerful feeling; it can drown out anything. I wanted the picture to set up like a fairy tale, outside time. Kit and Holly even think of themselves as living in a fairy tale, children’s books like Treasure Island were often filled with violence. I wanted to take a little of the sharpness out of the violence but still keep its dreamy quality.” It’s this ineffable quality that gives the feeling of an American classic, without being pigeonholed to a specific era– though, as we see in films like The Thin Red Line, The New World, The Tree of Life, and A Hidden Life, Malick will only perfect on what he started here with period accurate pictures.