Back in 1994, when some of us were just being born, Go Fish was making waves at Sundance. Co-written by Guinevere Turner and Rose Troche (both of The L Word fame) and directed by Troche, the film was the first of the festival to be sold to a distributor. Go Fish went on to gross $2.4 million, and is widely regarded as having proved to Hollywood that lesbian films can have broad commercial appeal. Duh, Hollywood. Now entering its 25th year of existence, and having firmly cemented itself as a lesbian classic, this Chicago-based romantic-comedy-meets-video-essay has just as much to offer today’s audiences as it did in ‘94.

The basic premise of Go Fish is that Max, a young writer played by Guinevere Turner, is looking for love. She frequently mentions to her friends that it’s been ten months since she last had sex, and that she really wants a girlfriend. Her roommate, Kia (T. Wendy McMillan), a college professor who brings us into the movie by asking her students to speculatively compile a list of queer women throughout history, is determined to set her up with Ely (V.S. Brodie), who Max initially dismisses as someone she isn’t interested in because she looks like a hippie. This hippie thing seems to be a real sticking point for Max, who is young and idealistic and has a very specific vision about the type of girl she should date, but Kia is determined to bring these two seemingly incompatible women together. After a movie date pretty conspicuously orchestrated by Kia, Max and Ely have a discussion about the burden placed on queer makers of art to speak on behalf of the entire community, and lo and behold, they end up kissing.

The romantic plotline is complicated by the fact that Ely has a long-distance partner, who unfortunately calls right in the middle of Max and Ely’s first kiss. Max and Ely’s friends, including Kia, Kia’s closeted girlfriend Evy (Migdalia Melendez), and Ely’s womanizing roommate Daria (Anastasia Sharp) are determined to get them together, and continue to create scenarios to enable their budding romance. The good-natured meddling of these friends is delightful to watch, and their complete and utter investment in Max and Ely’s relationship is contagious even while their chemistry is sometimes dubious. 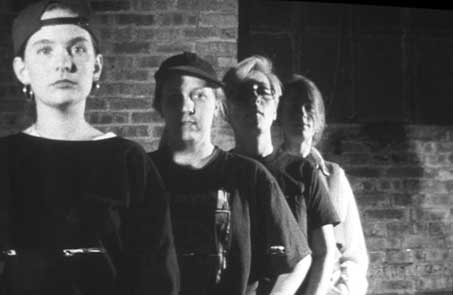 What differentiates Go Fish from more conventional rom-com genre staples (aside from its obvious shoestring budget, arthouse aesthetic, and lesbian content) is its tendency to veer into essay territory, ranging from Max reading meditative prose-poems about all the things that can keep you from meeting the person you’re meant to be with to an extended nightmare sequence in which Daria has her identity as a lesbian interrogated by a mob of angry women after she has sex with a man. While some of these scenes can feel self-consciously “artsy” and might remind viewers of how Jenny Schecter’s writing is visually represented in The L Word, the themes of these video essays and bits of dialogue that are delivered more like thesis statements resonate with ongoing conversations about gender and sexuality, from the oppressiveness of a butch/femme binary to heteronormative expectations of what “real womanhood” is supposed to look like—wedding dress and all.

Having grown up in a post-Go Fish world, where queer media made by and for the communities it represents, although still severely lacking, is not as limited as it once was, I don’t have the same sort of sentimental attachment to this film as someone who saw it and felt a deep resonance with their experience that they otherwise hadn’t encountered. That said, I found it incredibly charming in spite of the subpar acting and somewhat baffling shots of a top spinning on a chessboard that are peppered throughout the movie. Go in expecting the exact opposite of glamour and sensationalism, complete with grainy black and white cinematography and day-in-the-life-style storytelling, and you won’t be disappointed.