No Outside by FUGITIVE BUBBLE 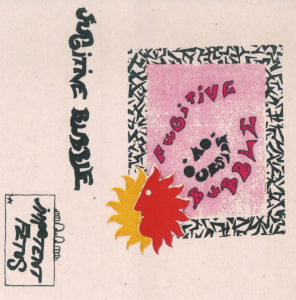 I’m sitting in a swanky space restu-
arant. Some guy is talking about ho-
w decadent his Rockefeller oysters a-
re. I look at the man, and then at t-
he plates he is surrounded by. Then
back at the man. The woman he is wi-
th seems disturbed. She can obvious-
ly feel my gaze stabbing their RF b-
rain implant aura and looks over. S-
pies. Damn.

I’ve lost my appetite. I look across
the table at my strange reptile comp-
anion. Her eyeballs are green and oo-
zing this weird color I’ve never see-
n before. It smells like lettuce. Sh-
e smiles. The most horrific fangs. I
had set the screen to nightmare earl-
ier in the evening, and clearly it w-
as just getting started. The thought
imprint technology this season is pa-
rticularly boss. But, this is a bit
much.

I have to look away. I give a nervou-
s laugh. The view is pretty great, I
have to admit. Considering the price
of all this it had better be pretty
great. These Earth lobsters are spoi-
led, and the air is disgusting. Ever-
ything smells like fish. It’s not ju-
st the ooze from my companions eyes,
either. It’s a matter of circulatio-
n. They haven’t figured out ventila-
tion yet. Everyone and everything d-
oesn’t get sucked into the void, but
it smells like fish, wilting lettuce,
and mildew. But the view is great.

I find myself asking, “This is the
best we can do?” I look at my watc-
h. I forgot it doesn’t work. I ask
one of the waiter’s what time it i-
s. He looks at me and laughs. He p-
oints at my shirt. Mustard. The gu-
y walks away without answering the
question. Oh well. Doesn’t matter.

The table next to us has a bunch o-
f kids. They’re oohing and ahing w-
earing VR headsets. They’re poor.
The Mother and Father look incred-
ibly self conscious in their surr-
oundings. I notice an old woman l-
ooking down her nose at them. She
is wearing an incredibly large fl-
uffy hat. She cracks the claw of a
lobster and the mother at the tabl-
e next to me winces.

I think I’m going crazy. This was
supposed to be an all expenses pa-
id trip. Me and my companion were
on a game show this morning. Prom-
ised the best trip money could bu-
y. Now I’m not so sure. I feel ki-
nd of ripped off. Not by the game
show, it was so much fun playing
hologram plinko, but buy how ove-
rhyped these space restarants ar-
e. All kinds of music videos get
made on these things. Space casi-
nos. Strip clubs. Space yachts. A-
stral bay coke parties. Total bul-
lshit, I’m discovering.

I’m too old for this. I look at m-
y companion. She’s regained her u-
sual form. I can tell she is unha-
ppy. Suddenly I see it. A giant c-
loud of frozen shit outside the w-
indow. Heading straight for us. I
have heard about these things. Th-
ey get ejected by moon barges whi-
le they transport colonists to th-
e mines and dome-ghettos of Luna.
We’re about to die.

Sure enough, a few seconds later
there is a flash of light. I’m f-
loating in space, freezing my as-
s off, and that’s it. Lights out.
The last thing I see is my compa-
nion and several other space tou-
rists getting sucked into the Ea-
rth. Their corpses catch fire an-
d disintegrate.

You too can indulge in the unique paranoia-hardcore hybrid that is No Outside on Bandcamp!