I’m not going to lie — trying to get this newsletter out was a bit of a struggle. Currently, I’m adjusting to a new job and finding time to write on the weekends. But I’m still happy to be able to send this out, even if it’s a couple of days late.

Coincidentally, all media I’m featuring this month were things suggested by Spotify, a friend, and my local library. I dove into these with no expectations. Read more on which pieces of media turned out to be enjoyable or disappointing.

Lastly, I want to thank the new people who subscribed and those who liked my previous newsletter! It’s great to see that people are liking this project — I appreciate any feedback. And if you know other people who would enjoy these monthly recommendations, please share or forward them this newsletter!

I didn’t find L’Imperatrice, a French six-piece space-pop nu-disco band. Instead, Spotify found them and their latest album Tako Tsubo for me. The retro anime album art instantly caught my attention but I could not have expected this to be my go-to album for commuting and working.

The name refers to “broken-heart syndrome” or the deformation of the heart due to severe emotional stress, whether it’s sadness or joy. The album starts off strong with “Anomalie Bleue” and “Fou”, with pulsating funky bass lines and drums that are consistent with the remaining 11 tracks. Their best tracks are made of distinct moments of euphoric synths or melancholic guitar riffs. Effective pacing lets them play 4-5 minutes without dragging.

It’s rare for me to listen to a full album where each song is distinct and memorable. Tako Tsubo tends to fade towards the end as songs like “L’équilibriste” and “Tant d’amour perdu” offer nothing the previous songs didn’t already give. Being a nu-disco band, L’Imperatrice risks sounding kitschy and sterile, especially with their English songs. Their English vocals can’t seem to match the emotion and funk the instrumentals deliver. Still, their bass, synths, and drums have enough compelling rhythm and groove, which has made this album ideal for casual listening. 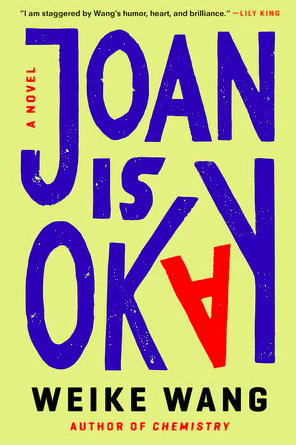 Joan is Okay by Weike Wang is a short novel I picked up while browsing my local public library’s new fiction selection. Joan is the division chief of an ICU in an NYC hospital. The thirtysomething Chinese American woman tries to balance the needs of her patients and the needs of her family. Her father’s death makes her question the tension between the two and her own minimalist lifestyle.

Choosing between the hospital and family is a normal problem doctors have. One of the reasons why I picked up the book is because my own parents are doctors who struggle with this. However, her colleagues, relatives, neighbors, and even the doorman are more worried about are what is left of Joan’s life. This includes her lack of social life, hobbies, and apartment décor.

Her ignorance on why these things are important was endearing instead of concerning to read. With her pure dedication to her practice, she meekly dodges these disruptions to her professional life. And once Joan is forced by the hospital to have downtime, she starts to immerse herself in American pop culture. It was hilarious and ironic for her to discover Seinfeld and Friends for the first time and why they were supposed to be funny in her own Manhattan apartment.

Joan’s minimalism contrasts her brother’s lifestyle, who is living the Asian-American dream and constantly tells her to follow his lead. Fang has reached ridiculous levels of wealth with an upstate NY family compound complete with household staff and ostentatious family parties. But Joan has no interest in these things and Fang holds that against her.

Even her stream of consciousness is reserved. This makes each anecdote, no matter how small, packed with honesty, earnestness, and wit. There is no fluff in these 212 pages.

But I wish there were 20 more pages to this novel. Towards the end, Joan briskly describes the pandemic entering NYC. This was the first novel I read that references the pandemic. While it was interesting to see things unfold through her perspective, she seemed to brush past how drastic things actually were, especially as a doctor in NYC and as a Chinese-American woman. Weike Wang fumbles in tying in the deaths of thousands with Joan’s grief for her father.

Still, Joan is Okay is a refreshing and endearing short novel. It examines what modern-day loneliness looks like in different spaces – at home, with family, at work, and in being an American immigrant. And with all of this, I would say Joan seems to be doing okay.

Netflix is known for pumping out mediocre original films and shows as cash grabs. However, Hulu seems to be the place for quirky lowkey hits like Palm Springs (2020) and Plan B (2020). A friend of mine said we had to watch Hulu’s latest movie, a dark comedy thriller on modern dating and the cannibalism market.

Fresh (2022) was just shy of being a dark comedy and a thriller. Noa is almost ready to give up on online dating. Ironically, it wasn’t the guy she met through a dating app that proved to be dangerous. It was actually the charming stranger at the produce aisle who struck up a conversation and organically asked her out. Steve seems to check all the boxes for Noa, up until he kidnaps her for his small business – a human butcher shop for wealthy cannibals.

The remaining hour and a half follow Noa’s attempt to escape as Steve gradually takes away her body parts, which keeps the meat fresh for his clients. And then things start to feel familiar to me. Set in a mansion with underground top-notch facilities, an unsuspecting protagonist becomes the victim of the darkest cravings of the ultrarich and tries to escape. Get Out (2017) and Ex Machina (2014) have the same plot except in terms of racism and artificial intelligence respectively.

But Fresh’s biggest flaw isn’t its lack of originality. It was interesting to see the theme be applied to the hyperbolic fears in modern dating. What makes the other two films better than Fresh is their commitment to constructing the protagonist’s escape. There are barely any characteristics given to Noa except for her disillusionment with dating and desperation to leave. Then, the many logistical issues in trying to escape her cell, then from her insane captor that could have happened but didn’t. Instead, Fresh relies on the fickleness of a promising antagonist and lots of luck. In the end, I wish it leaned more into its plot holes and became more absurdist considering its already ridiculous plotline.

Liked it? Take a second to support Anna Cayco on Patreon!