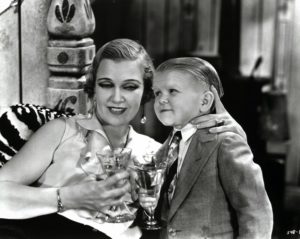 I’m sure you’ve heard that line before—it’s haunting nature normally toned down for comedic effect. Nevertheless, the line is anything but funny—its inception comes from the 1932 Tod Browning classic, Freaks. Tod Browning—one of my favorite directors—is best known for Dracula and, in later years, the cult classic that Freaks became. Freaks was initially hated and vilified upon its initial release. It was so shocking, in fact, that it was considered too vile to be released. Tragically, the original theatrical version was cut by 24 minutes and is now considered lost. Audiences nearly rioted against MGM, claiming to sue for the trauma the film caused them. You know that’s a good film when an audience member threatens to sue.

The film opens with a sideshow, where many people peer over when appears to be a chicken pen. The sideshow barker warns of the vile scene that dwells in the pen. One woman peers over and emits a bloodcurdling scream.

The screen fades to black.

Freaks spins the tale of Hans, a little person in a sideshow in the 1930s, where carnival workers and good people with disabilities and deformities are thrown to the wayside by society and regarded as “freaks.” A man full of kindness, Hans is tragically and easily manipulated when beautiful trapeze artist Cleopatra digs her claws into him. She is after his wealth and he is blissfully unaware, not wanting to hear reason from the woman who truly loves him, Frieda.

Ignoring Freida’s imploring and warnings, Hans succumbs to Cleopatra’s seduction and marries her. Little does he know that she is having an affair with the sideshow’s resident strongman, Hercules, a thickly-muscled buffoon with whom Cleopatra is conspiring to poison and murder Hans. At the wedding ceremony, where the freaks kindly accept Cleopatra—despite her being an “outsider”—chanting to her, “one of us! One of us!” She drunkenly berates and slaps their kindness back in their face, insulting them for their deformities and mocking them. Everything comes to a head when Cleopatra throws her wine in their faces, parading a poisoned Hans on her shoulders to mock him further.

Knowing he has made a mistake in marrying such a cruel woman, things spiral out of control, and Hans and his friends plot to show her that she is not—and never has been—the better person.

Freaks is an absolutely brilliant film that remains just as important today as it was in 1932. Its screenplay, its acting, its creepiness and its heart make the film deserving of its title as a cult classic.