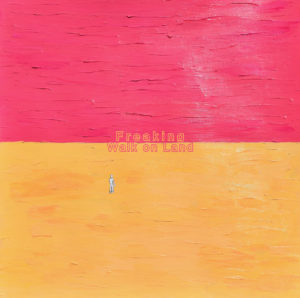 The first full-length by Boston indie rockers Freaking is at once surprising and arresting. (And exciting.) They—that is, Chris Faria, Meryl Schultz, Tyler Zizzo, and Sam Robinson, several of which former members of Salem pysch-punk outfit SUPERTEEN—have embraced the clashing themes of their 2019 record, Mind Palace, for a more even, synthesized sound, one in which dissonance and tranquil ambience walk hand-in-hand, songs sprawl and meander, and the band feels at once comfortable and weird as ever.

What strikes first in Walk on Land’s immediate sonic presence is a calmer, more calculated, layered and intricately produced approach to songwriting; the album’s first single, “I’m Not Opposed to Sand,” opens with a moody, droney, fuzzed-out guitar solo, joined soon after by an army of chattering voices and a driving beat as the song picks up. The track takes its time to develop, dwelling somewhere between bare texture and melody as it mounts to a screeching climax.

It’s also remarkably anti-capitalist. “The days are counted and planned out many years in advance,” Schultz crones in spoken-word style over a repetitive, driving drumline, “and if these calculations contained any errors, they never involved a surplus.” Freaking lean further against the characteristically late-capitalist compartmentalization of daily life later on in the track, explaining in what sounds at once like a criticism of social media and the dehumanization of the side-hustle lifestyle: “Chopped up bits of lives / Even sized pieces / Planned out divine / Time right and time wrong / At the same time”—and, later—“At the same time / That you check the clock / You decrease, decrease / The chance of forgetting that / We’ve got no power.” It’s only fitting that a song that deals so heavily with themes of structure and time being out of order should contain so many pace-changes and stylistic shifts itself.

In the calmer and more ambling moments of “I’m Not Opposed to Sand,” one is reminded of the noisier sides of their 2019 release Mind Palace, on which the second of two songs, “For,” sounded confidently rough around the edges, explosive yet calculated.

And speaking of: Walk on Land is also a more confident rendering of those two songs off Mind Palace.

On the album, “aside from literally containing re-recorded versions of both Mind Palace tracks, the five other tracks extend on the stylings of [the release] as we developed and began to find our sound,” Zizzo said in an email. “Though it is certainly not more of the same, and [it] maybe even catches us at the extremes of the sonic territories we dive into on Mind Palace.”

Freaking see their rerecorded versions of the Mind Palace tracks not so much as a reimagining of the EP but as a continuation of it.

“Walk on Land and Mind Palace feel very much related to me,” said Zizzo. “In my mind [the pair] are two different moments captured during the same chapter of the band. Though, at the time of recording Walk on Land, I think we all felt more confident in our ability to play the songs, and we had more of a collective sense of our sound.”

The recording of the full-length, Zizzo added, was accompanied by an exploration in recording technique(s)—which was all done by the band themselves, with the help of Ben DeUrso of Citizens’ Loft, in a house in Brighton. With more—and different—recording technology at their disposal, Freaking felt their sonic horizons expand.

“Being in the studio and multitracking really allows room for experimentation,” Zizzo said of the  process. “I really enjoy this part of the process. We are able to layer guitars and vocals in a way that Freaking cannot really achieve live. This is something I feel has been very useful to us when it comes to creating textures especially in the dreamy, ethereal sections of Walk on Land.”

Dreamy and ethereal they are. Dreamy in the sense that they literally feel like a dreamscape, with all the jarring narrative shifts that entails; the album’s opener, “5,” begins with a reverbed, plodding series of guitar strums, and—after a funky spoken-word switch-up about a minute in—the track variously barrels toward a noisy, spacey, speaker-rattling climax. (Soothing nightmare.) But ethereal in the sense that many of the album’s tracks sound like what floating in space must feel like—at once calming and alienating. The panning, filtered no-wave-esque vocals float atop the driving, noisy “Spongebath,” which careens from slow, shifting guitar soundscapes to a more minimalist, grimey punk rhythm—and then right back to the kind of ambience Freaking has been able to seamlessly weave into their repertoire.

And that’s not to forget the re-recording of “Sugar,” the first track off Mind Palace, a great showcase of that acute sense of narrative songwriting ability alluded to above; it’s more than two minutes longer than the original Mind Palace cut, much cleaner-sounding, and in many ways much more eerie—the minuteish-long jam toward the latter half of the track is a demonstration of the band’s more tranquil side, flowing effortlessly out of catastrophic noise-rock right back into it.

Walk on Land is, if nothing else, a solidification of Freaking’s eclectic, boundary-pushing dreamy punk sensibilities. But it is something else, too: It’s an enjoyable and exciting album, the work of a rising star on the Boston music scene, an encouraging promise, too, of what’s to come.