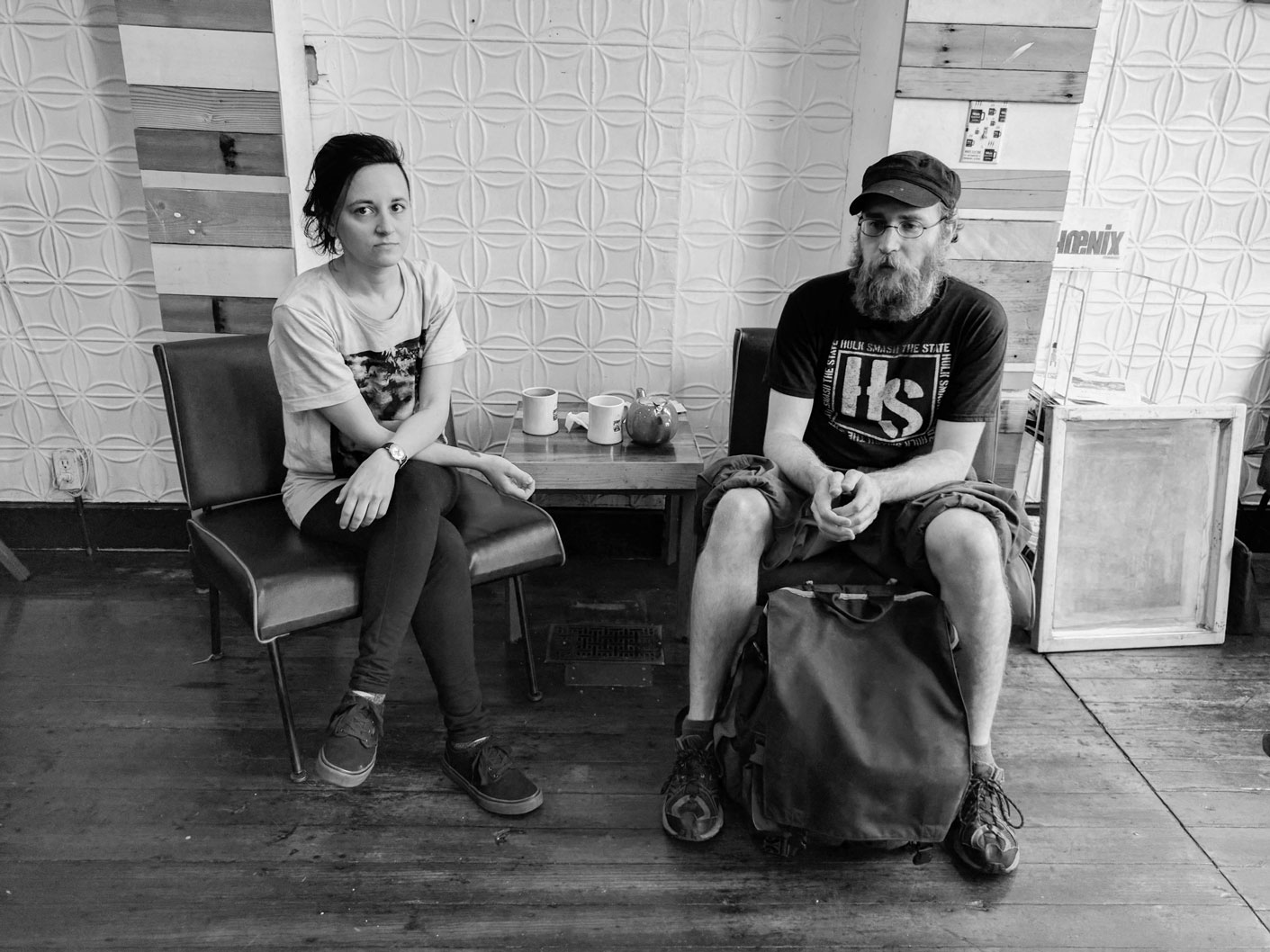 MAR is an emotionally raw sludge punk band based in Providence, RI. On May 26th they’re celebrating the third release of their recordings, a 6 song-er called FILL YOUR LUNGS, with a show @ Psychic Readings w/ / visibilities, Suicide Magnets, and Caroline Park. I asked front woman Kay Belardinelli a few questions about the album and MAR’s near future through email.

So you have this new album being released, FILL YOUR LUNGS, what kind of lyrical themes are you dealing with in these songs? Are all your lyrics personal?

Every song on the album deals with emotional trauma and survival in some way. Most of the lyrics are pretty intensely personal, yeah… There’s a lot about an abusive relationship I used to be in, and some stuff about my brother who committed suicide. There is a silver lining though in the title track Fill Your Lungs, which is about channeling your negativity into something positive: “FOCUS THE RAGE”.

“Sick Of It” might be my favorite track off the album. What are you sick of? What musical influences of yours inform a raging tune like this?

Oh boy, this is going to be a long answer… We actually wrote that song really quickly – I think the music for it was written in a single session. I was just feeling a lot of angry energy that I couldn’t put my finger on. Then I was at a support group for survivors of domestic violence, and someone there said something that lingered in the back of my mind for a while. She was describing the ways the abuse had worn her down, to the point where sometimes she just had no fight left in her. She said, “Sometimes I’d be like, I just wanna have a good day today.” Eventually that became the chorus and I just yell that over and over.

I’ve thought a lot about how heavy the labor is to survive an abusive relationship, and how I personally have gone through long periods where every day is some sort of struggle. I think about how much time I’ve spent going to therapy and making art, and meditating and writing, and doing therapy worksheets and going to group, and taking my vitamins and working on mending my relationships with others, and rebuilding a positive self-image… it’s a lot of work. Yet still I find that people will judge you and think that you’re doing it wrong, or that you should somehow just make your PTSD magically disappear. So the song is like HEY, fuck you, I’m doing the best I can, and I’m just trying to live my life!

Musically we often write our songs with a lot of intention, plotting out the song structure and trying to make things interesting, but on this one I was like, “Let’s just go for it without thinking”, so it goes right into the chorus almost immediately. 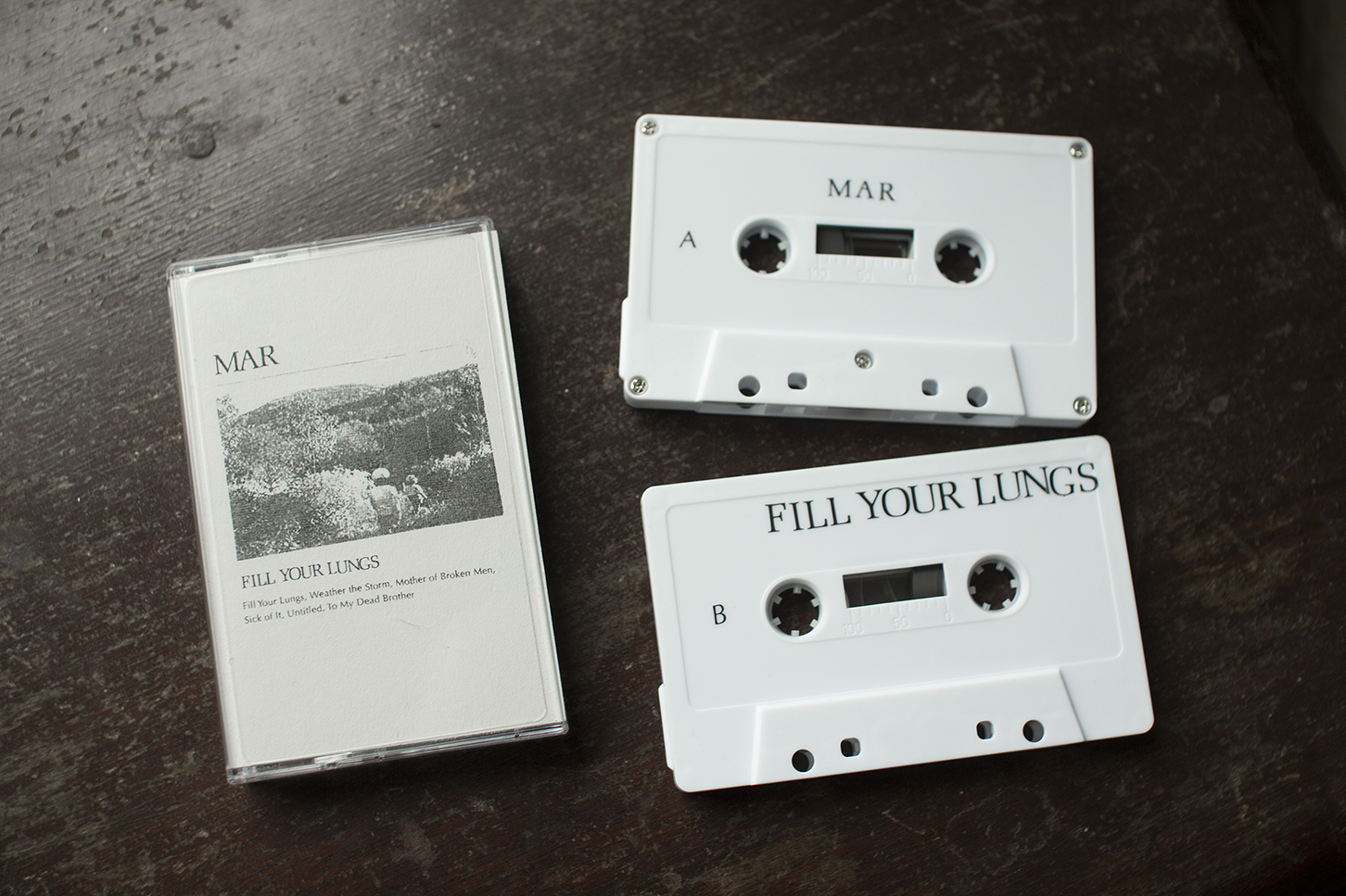 The fifth song on FILL YOUR LUNGS, “untitled”, is some heavy shit. Maximum low end. THE BODY territory. I assume this is a bass guitar, what kind of equipment set up do you have for a song like this? (And if it is a bass guitar) How often do you switch back and forth between bass and regular guitar?

Erik and I switch off with guitar and drums, and then every once in a while he’ll do something with bass. On Untitled he does some magical wizardery that he originally developed for a solo project a while back. I had to ask him what the hell is going on there for this interview! Apparently it involves a bunch of effects pedals and a lot of gain, and running the bass signal into a small mixer in some way that produces these unpredictable waves of feedback. Meanwhile I just sit in a corner hitting some drums every once in a while and yelling about stuff haha.

You’re also a zine maker right? Zine culture definitely spills over into MAR’s merchandise. Working at the intersection of different underground mediums, as it were, what drives you to express your message/art through multiple mediums within a single project?

Yep I have a zine called Murmurs, Chants, and Screams which has two volumes (so far). It’s not explicitly a “Mar” zine, but it has similar themes to the music so I like to sell them at the merch table along with our tapes. I also use similar typography and styling between the zines and art for the band so there’s a visual connection. I think having sound and written word together adds depth to the listener/reader’s experience. My style of writing for zines is generally very matter-of-fact but also radically honest about some traumatic shit, in sort of a detached and unemotional way. But then the music is kinda the opposite, in which the lyrics will be more poetic and the music is intensely emotional with literal screaming in it. I don’t think I would feel satisfied just doing one or the other!

What’s the deal with a summer tour? Will you and Erik be playing Boston? I know a guy.

So far the plan is to do a mini northeast tour in late June with our friends Think Tank from Brooklyn, ending with Fuck the Fourth Fest in Providence on July 2nd. Other dates TBA!