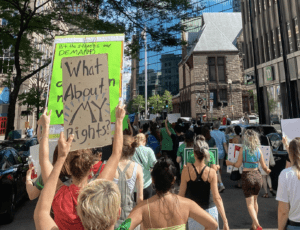 Demonstrators take to the streets of Boston to protest the overturning of Roe v. Wade. (© Steve Schroeder)

On July 2nd, 2022, a lone snare drum in a column of boots marched the Freedom Trail with riot shields and covered faces. The scene happened from 1 PM EST until their departure at the Oak Grove Station around 2 PM, accosted by Bostonians and protected by police. A vigilant but unprovocative law enforcement presence raised more doubts among the pedestrians and tourists asThe Patriot Front assaulted a local artist.

On July 3rd, 24 hours later, in front of the JFK Federal Building, a demonstration was organized by members of the Socialist Alternative Boston. The Extinction Rebellion and Boston Liberation Center volunteers arrived with card tables and sign-up sheets. Redshirts moved through the 200 protesters passing out water while various speakers took the podium to voice their anger at the current presidential administration,

“I’m never voting for them (Democrats) again after they’ve had 50 years to codify Roe, and we ended up in this position,”said Emilia Morgan, a UMass-Boston student and organizer for Democrat Socialists of America. The decision to overturn abortion access by the Supreme Court in America has sent alarms through a population already deprived by years of political neglect at the hands of a conservative minority.

Gabby from the Party of Socialism and Liberation said, “They passed this cruel decision taking away a vital human right, yet they say at the same time it’s too complicated and too expensive to address the baby formula crisis.”

Stevie Dowie, an organizer for Extinction Rebellion, went further on the SCOTUS decision in West Virginia vs. EPA, which undermined the EPA’s ability to regulate carbon emissions effectively.

“The abuse of power at the expense of the health and safety of the people the past few weeks has shown how truly anti-life they are,” he said. “The last few weeks have reinforced just how little hope we have in combating the climate emergency under the current political system.

Party division is an active concern of the Democrats so close to midterms, with the race no doubt to be neck and neck. As the sun bore down on the pavement, we stood under the shade of the immigration center. We marched in three circles on the sidewalk, all of our frustrations bubbling to the ultimate doomsday scenario, ending popular rule and, by virtue, democracy. Among the protesters and their signs of hope, a woman came from the sidewalk, pointed her finger, and called us murderers. We left at 3:00 PM.

On July 4th at 5:00 AM, spectators of the Boston Pops began to set up their lawn chairs. Storrow Drive became a pedestrian paradise as the city prepared for its celebrations kicked off by a reading of the Declaration of Independence at the Old State House. On Charles street, I followed a woman holding a sign to the intersection of Mount Vernon where 50 protesters for RiseUp4AbortionRights blocked traffic. 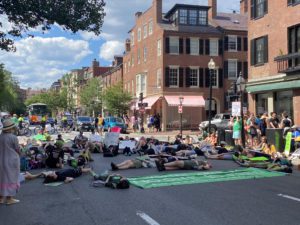 At 3 PM, RiseUp4AbortionRights activists staged a die-in in a moment of solidarity. Police blocked traffic and waited. In the silence of the activists spread on the ground, a man surrounded by his family called out, “Murderers! Save the lives of infants!”
A hush resumed, and for another minute, silence prevailed. But the group jumped to their feet, green banners unfurled, signs struck into the air, and marched down the street in unified chant, “Not the church, not the state, Women must decide their fate!”

I didn’t know the route, but I joined along and spoke to a volunteer:“It’s the 11th hour.”

We left Charles and took a right down Marlborough past the brownstones with American flags waving over broken sidewalks. We crossed Newbury, where cars honked but waved with cheers from the shoppers. We moved toward Boylston, where we were booed and had to rush to fill the streets to prevent cars from driving through us.

A motorcyclist moved through our crowd, giving us the middle finger and revving his engine as we made it to the Common . We stopped at 6 PM in front of the State House, and as we prepared to disperse among the 4th of July celebrations, one of the event coordinators, Maria Sanchez said, “We need to foster civil disobedience, we need to keep up the pressure to overturn this racist ruling. Get in the streets, walk out of work tell everyone to be part of the new rule and get everyone you know from everywhere you can and get them to march into the streets!”

I went to the Esplanade and met some friends, and we drank and wandered around the parade grounds. I noticed the military police presence, and my friends pointed at the rooftop snipers.

The rest of the police stood by, some in tactical gear, others patrolled with a dog. We couldn’t make it to the Hatch Shell, but in our section, we heard talk of the Proud Boys, drunken chants of Nazis to fuck off, and cheering on the police in their motorized golf cart as they drove by.

Fireworks draw our eyes from the ground while the band plays.