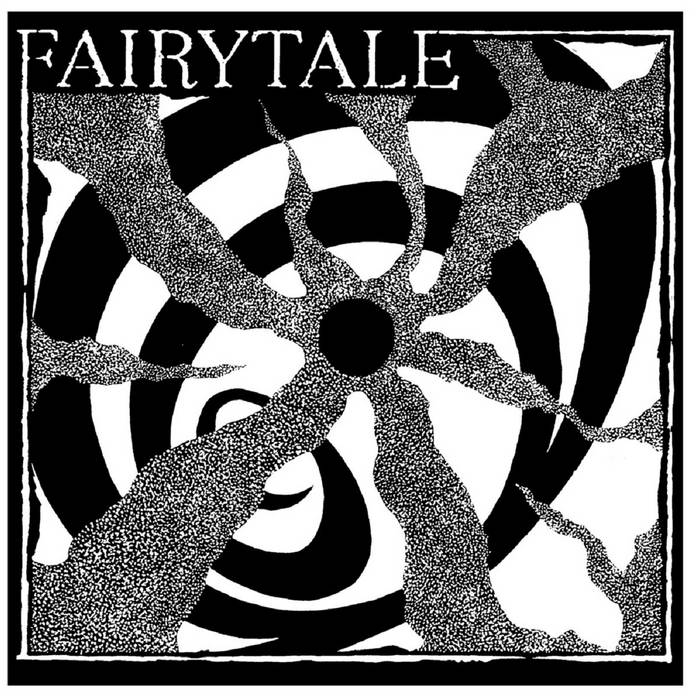 NYC hardcore four-piece Fairytale released their self-titled EP early this year via Desolate Records. In just four tracks (under ten minutes total) the band establishes their presence as a creative force in the hardcore punk scene.

The EP opens with haunting feedback and eerie percussive taps over a meandering guitar riff. Before long, the band kicks up in a whirlwind of d-beats. “Fantasy” begins. The riffs storm out, fast and circular, leading back into themselves, more purely energetic than melodic. Tense vocals scream from a gravitational delay that feels like it could be emanating from the black hole at the center of the album art.

Tone on the record is superb. The guitars are fuzzed, sometimes wide, sometimes needling with intense tonal chaos over the rest of the band. The bass sounds like sentient sewer sludge. If you could rip the drum sound from one of those early Minor Threat/Black Flag records and put it on your EP, they’ve somehow accomplished this.

As far as band dynamics, “Master Thief,” showcases the widest variety of rhythms while still managing to include the storm of riffs present on other tracks. The song builds tension with a rising chord progression that gravitates back towards its beginning; the result feels like being on the edge of a wave that never quite crests. It has a memorable chorus which is somewhat slowed from the tempo of the other songs on the record and is probably my favorite track on the release because of this variation.

The guitar lines are fast, the tracks short, the vocalist sounds authentically angry. There’s no bullshit, no excessive introductions, nothing superfluous. I prefer punk live (maybe everyone does), but these tracks have an authentic and enveloping sound all their own.