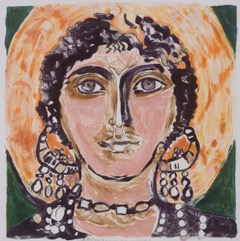 Icons & Talismans is a story about eyes that follow us; soft hands that have loved us; about allowing our vulnerability to pass through an image to invite the connection point between human and divine. To realize the images, I spent time in Salento (southernmost region on the heel that is Italy), following the footsteps of Byzantine artists who painted in the 10th and 11th centuries. I found small chapels, Crusader hideaways, and even an unearthed, underground sanctuary discovered when the property owner remodeled his garage. Each location featured frescos. Many of the frescos echoed each other in size, expression, color, hand gestures. That’s because Byzantine painters were artists who walked from Croatia to Tuscany and beyond carrying the same catalog of images. Working from their templates, I made monotypes. Monotypes are reverse paintings on glass. Paper is pressed on the glass and then peeled off to reveal a right-side-forward image. My intent was not only to tell a story about the human spirit and to duplicate the Byzantine practice, but to also transport sensations, time and place to Boston. (The large monotypes chosen for the exhibition are modeled on frescos in Casaranello, a small paleochristian church; the oldest and most important monument in the primitive Christian age of southeastern Italy.)

Christine Palamidessi is an artist, sculptor and published novelist. She works in her Somerville studio and in Salento, Italy. Her art explores the imprint of time, story, and spirit on the interplay of material and subject. In 2017 she was Visiting Artist at the American Academy in Rome and at Mass MoCA. Her work is held in collections in the Dominican Republic, Italy and the United States. She is recipient of a Barbara Demming Award for Women Writers and an Urban Arts Award. Her public art memoir “Grandmothers” is engraved on a granite monolith at Boston’s Orange Line Jackson Square station. Her installations and sculptures have been seen in galleries in Boston–particularly Atlantic Works Gallery, Galatea Fine Arts, and the State House–as well as in Chicago’s Woman Made Gallery, the Palazzo Bacile di Castiglione, in Spongano, Italy, and the Alfred Gallery in Tel Aviv.

Public is invited to Open Artist Talk and Visit with Christine Palamidessi in our Gallery on:

Images and text from www.palamidessi.com