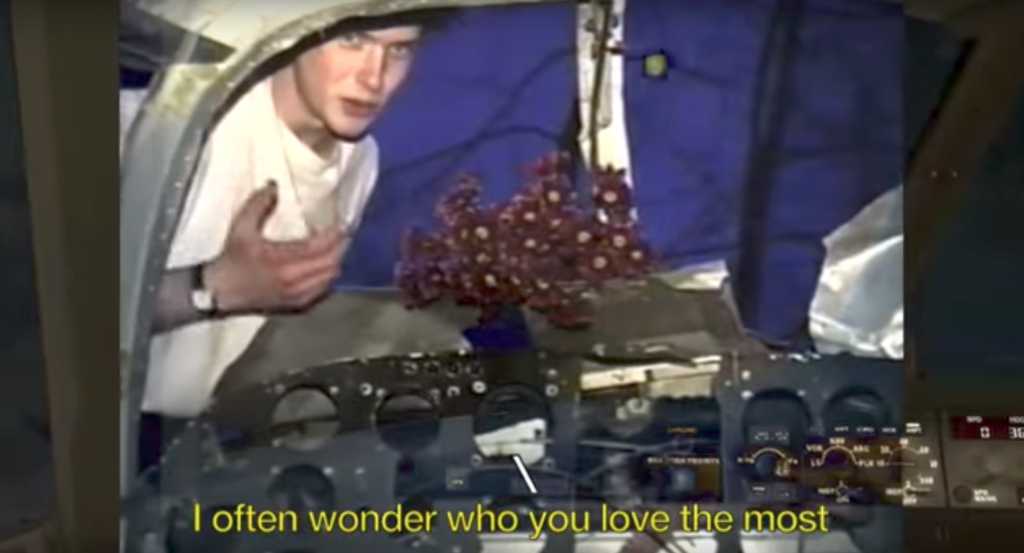 A couple weeks ago, a music video from an act called ‘Lucy’ appeared in my inbox. It was a kaleidoscope of mish-mashed images. A young man, or maybe a boy, inside of a destroyed cockpit looked at me with a half grin. Images of dark, snowy woods swayed in and out of the transparency. It made me laugh and it made me move. It made me wonder where something like this comes from and how deep the hole actually went.

As I began listening and watching and searching, Lucy unfolded for me in a strange and complicated way. The sounds and visual elements are all anchored by this unmistakably unpolished production method – album covers and videos that all look like the most amateur and unassuming experiments in some basic computer tool. They’re strange compositions – cheap sounds and auto tuned hooks. And despite all of this, it feels complete. There is enough there to communicate something – something lovely and romantic. To me, it acknowledged the angst of the future as much as it soothed and remained apathetic to it.

The person behind all of this appears to be just as undefined. Cooper was born and raised on Cape Cod, a place he considers “very dead for the majority of the year, with little room for young people to pursue art in a progressive way.” So at 18, he moved west to Hadley, MA and focused in on making music. At one point he was a part of the “Dark World” collective but left in November 2016 along with 3 or 4 other members, remarking that “things had soured” and that he “no longer supports what they are doing.” When I asked him further about what prompted his exit, he answered “ issues and I felt like my music was being lumped into this primarily white/all male rap category that didn’t seem appealing or fit the music I was making at all.”

In addition to significant collaborations with acts like God’s Wisdom, a 7 year membership in the band The Taxidermists, and a collaboration with producedbyghost called Club Casualties, Lucy released a new record titled “Cooper B. Handy’s Album Vol. IV” last week. 75% of the album sales will go directly to RAINN, the nation’s largest anti-sexual assault organization. Below is an email conversation we had where I got to ask him some of my more burning questions.

BH: When it comes to making music, do you consider yourself a perfectionist?

L: I don’t consider myself a perfectionist, but I do spend time on my songs until they turn into something I would want to listen to.

BH: What is your favorite or most essential musical tool?

L: Probably the piano. When a song idea comes to mind it usually becomes its own thing in my head and then once it’s ready, it’s up to me to make it physical usually by using the keys.

BH: Can you think of a strong piece of musical advice you’ve learned or been given?

L: Rule #1–it’s all about the music. Not money. Not image. Never hold back and don’t trust anybody.

BH: A lot of your songs are strangely romantic–are romance or relationships of any kind an important part of your life?

L: Relationships and communication are everything lol. Many times that includes romantic connections with people/places/things. I feel like it’s good to be able to romanticize certain ideas through music!

BH: Who is Lucy, really?

L: I started releasing music as ‘Lucy’ at age 16 around 2009/2010. Aside from close friends, people didn’t really pick up on it until 2014ish. The name could mean a variety of things–maybe a loose cigarette maybe psychedelics maybe that hominid from the Australopithecus afarensis species. Love Unity Communication Yes. Whatever really. I don’t have a set reason for the name- a couple people have taken issue to me using a traditionally female name to release and perform music under, and I can understand why that would seem bad. That said It’s a name I’ve come to care about over the years and I can identify with the name.

BH: Do you have any interests or hobbies outside of music?

L: I’ve been working in food services for Amherst college since 2012 and as many people know-food service is alive/the devils inside–I rock with it! I love to be physically active–love tennis–long walks for real no funny business.

BH: What is your greatest fear?

L: Not being able to depend on myself

L: For me The radio always playing. Let’s me know what’s going on to a certain extent. Been listening to the top 40 my whole life and it keeps me in check. I always love watching what happens with music even when it sucks.