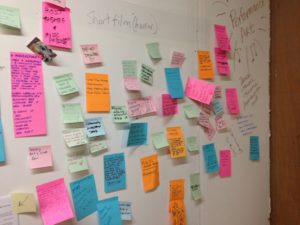 The shell of the Jackson Glass building at 3195 Washington Street was full on January 8th. Near the entrance, I spoke to two painters, relative old-timers, who moved to JP in the early ’70s. Both used to have studio space on Amory Street, but that building was torn down to make way for apartments. “We miss having a shared space, where we can have more of a community,” they said. A younger artist agreed. “JP has so many artists and so little community space.”

The developers, City Realty, will let the building be used as a community arts space for six months, while they wrangle with the city about how to redevelop the property. Steve Whalen of City Realty said he wanted it to be like the POP Allston space on Brighton Ave. “Why leave a building fallow when you can offer it to the community?” he said.

By 7 p.m., community members had filled a wall with ideas on post-it notes: some for temporary programming, but a lot more for permanent development. Somehow, I don’t think community space is part of the long-term plan. For City Realty, an art space is something to occupy a vacant building, not a permanent fixture. “We plan to do more than just this one,” Whalen said, “if it works.” Translation: Community art spaces will be shuffled between vacant City Realty properties, as they are available.

So why bother? Because art space is great PR, which City Realty really needs in JP and Roxbury.

The name City Realty might ring a bell with some of you. In September of 2014, they raised rents by 65% on a commercial property at 3160 Washington. There were protests backed by City Live/Vida Urbana and the JP Neighborhood Development Corporation (both conspicuously absent from the event last week), and four of the six businesses were eventually evicted. The Jamaica Plain Gazette covered this article when it was happening.

Don’t get me wrong. A community space on Washington would be great, even if it is only temporary. But don’t let one cool thing stop you from asking questions about City Realty’s long-term plans in the neighborhood.