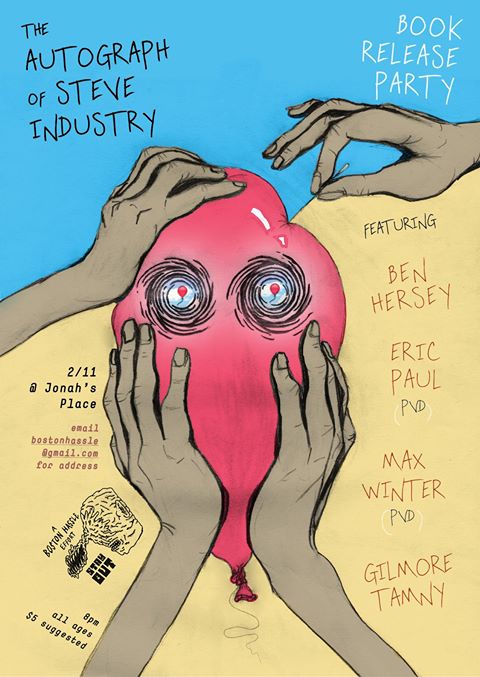 Ben Hersey is one of our favorite local thinkers. A writer and performance artist who usually leaves his audiences in stitches, Ben has been performing collaboratively and solo for the last fifteen years and is a mainstay at our biggest events like the last several Hassle Fests, Boston Underground Summit and outdoor shows in such elegant places at Revere Beach. His solo work often melds crafted monologue and formal storytelling with live composition, vocal improvisation and chance operations such as cheesecake and a chair tied to his ankle. The Autograph of Steve Industry, is his first novel and we are thrilled about its debut.

Providence’s Eric Paul is a writer and musician known for his work with the band Doomsday Student as well as past bands Arab On Radar and The Chinese Stars. Through the publisher Heartworm Press, Eric has released two full-length volumes of poetry: I Offered Myself As The Sea and A Popular Place To Explode. His work has also appeared in such places as: New York Observer, Impose Magazine, Ninth Letter, The Volta, Word Riot, Lunch Ticket, Spork, Booth and The Literary Review.

Fellow PVD literate Max Winter is a graduate of UC Irvine’s MFA program, and his work has appeared in Day One and Diner Journal. His debut novel, EXES, is forthcoming from Catapult in 2017.

Gilmore Tamny is a dedicated writer, musician and illustrator. Her postwar WWII good-bad girl/bad-good girl potboiler My Days with Millicent, is being serialized online here. She plays guitar in Weather Weapon with her favorite drummer, Stephanie Melikian and her illustrations can be seen here. Come see these ridiculous regional readers reconsider right and wrong and resist reciting their words in song.

Jonathan Vahid took some sick video when the Hassle brought Liturgy to town back in August...