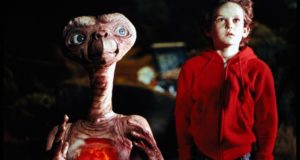 E.T. the Extra-Terrestrial is a cinematic landmark⁠—in my childhood, I mean. In the film world, too, I guess… but to me, it holds a place forever in my childhood, good and bad. I remember my father showing this to me, and being absolutely terrified of this film (as a child, can confirm I was NOT a fan of the sequence where E.T. gets sick) but also adoring it. From John Williams’ poignant soundtrack and the hazy California sets to the well-placed humor and the tangible bond between Elliott (Henry Thomas) and E.T., Steven Spielberg, as always, forms an atmospheric enclave beyond the stars where a lonely little boy and a small botanist alien can form a friendship. E.T. the Extra-Terrestrial is one of the rare films that sticks with you not only in mind, but in the soul, and makes you tear up nearly every time the film rolls, no matter how old you are (don’t lie, I know you do).

Despite being slightly terrified of E.T. as a child and having ironically grown into being a horror film lover in adulthood, I always find this fact incredibly intriguing. The 1982 classic was originally penned to be a scifi-horror film by Spielberg and writer Melissa Mathieson called Night Skies/Watch The Skies, about an alien who terrorizes a family, based on the urge of Universal to create a sequel to Close Encounters of the Third Kind. The idea was scrapped when Mathieson cried at plot of a kind, emotional alien befriending a little boy, and Spielberg instead used the material for Tobe Hooper’s Poltergeist.

E.T. opens with a UFO landing in the California forests to harvest plants for research. The aliens gather their plants while being watched by government scientists. Fearful, they leave, but accidentally leave one of their own behind. Seeking shelter away from the ravenous scientists, the little alien makes his way into the backyards of San Fernando Valley, in particular, the home of Elliott, Gertie (Drew Barrymore) and Michael (Robert MacNaughton), who live with their recently single and struggling mother (Dee Wallace).

When Elliott goes to get the pizza that his brother and obnoxious friends ordered, he is startled to see the alien in the tool shed. Once inside, Elliott breathlessly explains what he saw, but nobody believes him. Against his mother’s wishes, he sneaks into the backyard with a blanket, chair and Reese’s Pieces, and lures the alien out of hiding. Ecstatic at his newfound friend, Elliot begins to spend countless hours with the little creature, calling him E.T., short for “extra-terrestrial.”

Michael and Gertie eventually meet the alien and instantly bond with him. E.T. illustrates his powers of telekinesis to show where he is from in the solar system, can raise dead flowers and heals wounds by touching it with his finger.

As Elliott and E.T.’s bond deepens, things take a turn for the worst, as the snooping government agents close in and Elliot desperately tries to find a way to help E.T. return home.

Seeing E.T. the Extra-Terrestrial in the theater is nothing short of incredible, for both adults and children. It’s a cinematic and American pop culture icon that will leave you reeling with its sensitivity and its heart.