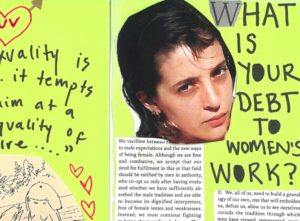 Grrls to the FRONT

The Stone Church is a great venue and this is a great cause: All proceeds go to the Women’s Action Team of Brattleboro. Presented by the Women’s Action Team and Promotorhead Entertainment, it features 10 bands, all woman-led, with a free consent workshop for teens in the afternoon. Go to that wildly nice food co-op while you’re there, or the thrift store by the bus station, it’s amazing.

DWP reached out to show organizers Sierra Dickey and Aaron Chesley for more info about this event:

DWP: Who booked the bands? Is this a mix of locals and touring artists or does everyone have some roots in VT/Brattleboro?

Sierra Dickey: Aaron and I worked together to book the bands. Living here for two years now, I have kept very beginner tabs on women in the arts scene, and I have wanted to bring them together. Living here for 30 years, Aaron had all the connections I needed to invite musicians in. Lineup is mostly Brattleboro bands, some from surrounding towns. We weren’t able to include every act we had hoped for because of time and conflicts.

Aaron Chesley: Right now we’re at 10, and we could have pretty much doubled that number with the available local talent.

DWP: How did you originally get involved? Why is this important to you?

Sierra Dickey: I am the creator and lead organizer, and I am putting on this show on behalf of the Women’s Action Team of Brattleboro, which is a power-building feminist group that I organize with. Aaron is my technical organizer. I love Kathleen Hanna, and there is a punk impulse to the Women’s Action Team, and I knew there were kick-ass women musicians bopping around Brattleboro so the idea coalesced sometime last year. The Women’s Action Team (TWAT for short) is incredibly important to me. It is my political nexus, and how I stay active and grounded in the human community of Brattleboro. I am a writer too, and so I get most excited about cultural organizing and cultural change. Arranging workshops, making guerilla art, sharing knowledge and enabling for others’ radicalizing moments are how I am most politically effective.

This concert is important to me because it privileges women artists in a male-dominated space. It also makes a little room in what some would call hardcore music for women and girls. I want to enjoy music and dancing and lite bacchanalia without feeling unsafe or objectified. I want to enjoy it and have it make me feel powerful rather than the hundred other things a big concert might otherwise. Lastly, it is a fundraiser for the Women’s Action Team, and we’ll use the money earned to (1) publish zines and pamphlets about our work and our plans for the future & (2) hire professional organizers from parallel movements to teach us new tactics and help us sharpen our inter-sectional vision.

Aaron Chesley: I just thought it would be awesome to play being in two female-fronted bands (Belle Machine and Jeopardy). For me personally it’s a thank you to local women in music and a chance to actively support women’s issues by doing what I do best which is playing and engineering music.

DWP: Tell us more about the consent workshop.

Sierra Dickey: The consent workshop is for teens of all genders ages 14-18. Yana Tallon Hicks is running it, and she is a licensed therapist and pleasure-positive sex educator. She wrote the Advocate’s sex column for a long time. Yana’s workshop focuses on sex but also looks at consent in other areas of life. You can read more about it here.

Pleasure-positive sex education has been a hot topic of discussion and research for TWAT this year and when I learned that Yana was a local experienced workshopper, I reached out right away. Plus, having the workshop occur concomitantly with the concert adds to the goals of the night: create space, offer radical moments, and do it with joy. We are able to offer the workshop free to all teen attendees thanks to a generous anonymous donor.