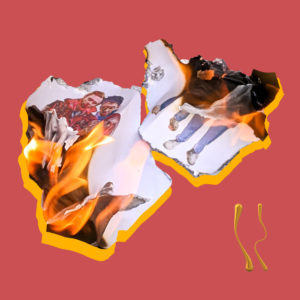 Diller’s second release is a delight, and manages to deliver a sense of cohesive optimism despite the fact that Connor Swingle and Alex Deutch are separated by over 7,000 miles. Currently situated in Kenya and Somerville, respectively, the duo have been playing together since meeting at Case Western. Replete with eclectic synth, steady whipping beats, and deep bubbling bass, Diller II‘s four electronic dance pop tracks glisten with a shine that can only appear through transition from friend to musical collaborator.

SwingleDeutch, which I’ll call them here for brevity’s sake, have a fluid songwriting relationship unhindered by the distance between them. “Connor will beef up my projects with atmosphere and samples to make them sound fully realized,” said Alex. “I will pare down his to help the important stuff shine through.”

For example, the second track “Good Signal Here” was initially arranged by Alex and then elevated through vocal samples added by Connor. The track meets up in a kind of club beat with gong-like synths, punctuated with mysterious spoken samples. The opening track, “Dillhead,” is a bit more of a chill and ethereal piece driven by a squirming earworm synth riff. Plus, of course, the half-audible vocal samples. They’re clearly human voices, but they’re veiled behind enough effects that one can’t quite make out the words.

“Intrasting” takes a comparatively verbose approach, declaring “I’m not nothing, I’m something… I’m taking every chance I get to learn about myself.” It’s ever optimistic and slowly builds — culminating in a joyous celebration of self-positivity and a beat that feels as easygoing as the lyrics. Clearly, Diller’s future is bright.

According to Alex, “during the pandemic we started a weekly call to share new material and talk about goals,” so it’s safe to say we’ll be getting more material in the future. Potentially December, Alex says. In the meantime, blast Diller II in the car and speed away to a warmer place – this record is best experienced with a glowing sunset and a warm breeze. Wait, you probably shouldn’t travel. So at least put it on while you’re shoveling your car out and dreaming of balmier climes.