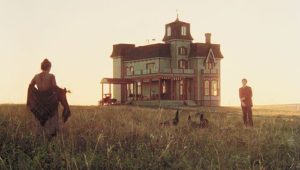 Terence Malick’s stunning film Days of Heaven chronicles the wistful lives of factory worker Bill (Richard Gere), his little sister, Linda (Linda Manz), and his girlfriend, Abby (Brooke Adams). The film, famous for its filming during the golden hour, is something out of a summer dream.

In 1916, Bill has just killed the foreman of the factory where he works in a fit of rage. Knowing that he will be prosecuted for what he’s done, he flees to the Texas panhandle with Linda and Abby. They become vagabonds, drifting through the summer as flighty farm workers with others. As they travel across the setting horizon by hopping trains, they stop to work at a massive farm owned by a wealthy man (Sam Shepherd) who has just been diagnosed with a terminal illness. He is told that he does not have much time to live. The Farmer falls in love with Abby, who pretends that Bill is her brother and Linda is her sister. As he stays healthy, Bill is continuously frustrated as the Farmer and Abby get married. Things begin to unravel when the foreman suspects their ruse, while Abby truly falls in love with the Farmer.