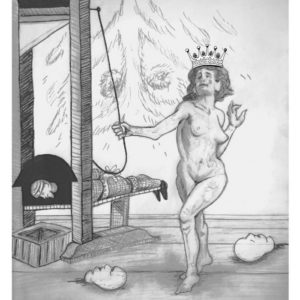 Reggie Pearl’s new EP brims with defiance; it is confident and tastefully brash, the answer to a question unposed, a beautiful act of subversion. If its all-caps title weren’t enough to communicate it, REGICIDE shimmers with a femme ebullience and an impatience with toxic masc energy.

“The word ‘regicide’ means to kill a king, and I’ve had to ‘kill many of my ‘kings’ this year,” Pearl explained over email. “There have been a lot of bad men and male influences in my life that have caused me a great deal of frustration. This is very difficult to express for many women, and I feel as though my EP has given me an outlet for this.”

Indeed, the EP deals heavily and honestly not only with themes of betrayal, addiction, and unhealthy relationships, but also with the ways those struggles can interact and congeal with (and for victims of) the male gaze. Reggie Pearl, in their current iteration—Reggie themself, Micah Rubin, and Mei Semones—find ways to make the heavy digestible, the macabre poetic, the cathartic engaging. Where Reggie Pearl’s previous full-length—2018’s Reggie Pearl & The Public—falls somewhere between “wine music” and “porch rock” (as its Bandcamp tags would suggest), REGICIDE waxes autobiographical and delves ceaselessly into the unforgiving and unsettling quagmire(s) of manipulation.

“Say It Back” holds no punches, kicking off the EP with a string of soft-sung verses before breaking into the sonic abrasiveness and vocal range that defines REGICIDE; “say it loud” Pearl yells, “call no cap / cuz I’m no good / say it back.” The track roars, its bassline relentless and repetitive, the drums driving until the song collapses back into calm contemplation: “did you ever wonder why I started smoking / never could relax / now that this bag has been opened / just take what you can get.”

Despite detailed descriptions of the other tracks in their email to me, Pearl had only this to say about the song: “‘Say It Back’ is a confrontation.” Their terseness is warranted; it is both a love letter and a summary of damages, a here-look-what-you-did to someone who seems now obviously not to care: “you sleep easy now / and I can’t clean / the mess you leave for me / I can’t clean.” The theme of addiction, though most directly addressed elsewhere on the EP, has its fingerprints all over “Say It Back”, through its cyclical obsession with validation and reciprocation—the titular chant, “say it back,” repeated over and over at the track’s noisy and cathartic climax. It is heart-wrenching and brutally unfiltered.

It’d be remiss not to address the discourse-breaking properties of the EP, especially in regard to the murderous language invoked in its title. (This is a good thing.) Judith Butler states in their “Critically Queer” that:

Where there is an ‘I’ who utters or speaks and thereby produces an effect in discourse, there is first a discourse which precedes and enables that ‘I’ and forms in language the constraining trajectory of the will. Thus there is no ‘I’ who stands behind discourse and executes its volition or will through discourse. On the contrary, the ‘I’ only comes into being through being called, named… and this discursive constitution takes place prior to the ‘I’; it is the transitive invocation of the ‘I’.

That is, to speak out against toxic masc energy is to participate in a discourse in which being femme is being not-male, where testaments to toxic relationships are “whiny,” and where speaking out against the cis-hetero-patriarchy is, in these ways, only strengthening its grip. But to kill, silence, the (albeit impersonal) progenitor of that discourse is to break out of it altogether.

Reggie Pearl, here, is not only killing the metaphorical king; they’re dancing at the king’s wake, so to speak—breaking the cishet male discourse by re-making it.

And “One Hit” is emblematic of that generative aspect of the EP, dealing directly with Pearl’s experiences with addiction—and with, as they noted, “the irony of it.” While sounding more muted than the rest of the EP’s tracks, the lyrics of “One Hit” remain ever ghostly and evocative: “keep that shit away from me / I don’t want no part in it / but if it’s free / maybe I’ll think about it.” It is contradictory in a way that is honest to addiction, ironic and facetious yet melancholic. Pearl’s vocals soar throughout the track, particularly toward the end, as they yell over mounting noise, a steady drumbeat and a wandering bassline. All this before reverting to the tranquility of the beginning of “One Hit”, as Pearl crones: “if it’s near me, all I’ll be thinking about is one hit and I’ll be set free.” “Every time I sing it I feel literally exhausted,” they noted. No wonder. The song—and the EP—is both a call for regicide and a testament to the ways addiction and toxicity coalesce.

REGICIDE’s final track, “Dairy Lottery Tobacco”, continues the theme of confrontation and callout: “I know you’re no good,” Pearl sings over and over throughout the song. As they said in an email, the track “takes me through the stages of hope and reality.” Which seems, here, to refer to the ways those often conflict. The track begins somber and quiet, Pearl’s vocals meandering among the other instruments, before the band slowly mounts to an explosive sonic high, Pearl’s near-screamed lyrics providing a hopeful conclusion to an otherwise depressingly honest EP: “oh I’m always picking up what others throw indirectly / oh I know you’re no good.” Pearl sticks with this understanding of toxicity and runs with it—the track is self-realization, perhaps chronicling the exact moment they decided to make this EP. “Dairy Lottery Tobacco” is an apt summation, the moment of deciding to go out and kill the king—a fitting conclusion to a subtle and daring release.

Keep an eye out for Reggie Pearl.