With the release of her fourth independent album Eden, CupcakKe has proven she is among the most versatile MCs out there in the game in 2018. Track after track, she effortlessly glides between the swagger of Chief Keef and other battle rappers from her home city of Chicago; the social consciousness of heritage rappers like The Lady of Rage or Queen Latifah; the sex-crazed bizarro pioneered by Blowfly and perfected by Khia; the agitprop of M.I.A.; the vixen every woman rapper must dabble in to appease a male audience; the hustling young entrepreneur with everything to prove; and finally, the frenetic, forward-thinking trickster that appeals to youth with noses buried in Instagram stories. Cupcakke, alias of Elizabeth Eden Harris, has arrived here at the age of 21 and, yet, she’s nowhere near her peak, and that reality should absolutely terrify both her peers and predecessors. Eden, its tour, and the 12/19 show at The Middle East Downstairs follow her third album Ephorize, released in February of this year, as well as CupcakKe’s appearance at the Glitter Ki 2017 Halloween party, also at The Middle East Downstairs.

Before CupcakKe could take the stage, four openers (and one surprise guest) shared the bill. By 8PM, a crowd of college kids finished with finals, Allston rats, and “slurpers” (CupcakKe’s name for her fans) had already half-way filled the venue. Some local queer celebrities, like Houseboi resident DJ Lunamariposa, could also be found in attendance. Local DJ Babygoat set the tone with a set of female MCs the likes of Rico Nasty and Princess Nokia. When “Bitch I’m Nasty” by the former played, a white queer in a crop top waved his hands into illusions to the music, then a black femme with blue hair dipped and death-dropped to outdo the former concertgoer.

The first opener was Shane Slaughter (Plymouth, NH), who brought doom metal fused with trap into the space. Following act Isabella Amarga (Boston) carried on a vibe that was equal parts downtempo and digital distortion. Slaughter and Amarga shared the stage for a duet, “Amphetamine”, and Amarga also performed SoundCloud fan favorite “Thirst and Hunger” in her solo set. Sporting bright red dyed hair, black latex hot pants, and bedecked in chains and studs, Amarga ended her set on a socially-conscious note, imploring the crowd to “Beat up your local creeps!”

Third up was Berklee College of Music student Hope Cranford aka Hopeadope, who previously performed at The Middle East Upstairs in October opening for Junglepussy. Hopeadope immediately initiated a shift in the crowd’s energy with her distorted, decadent take on hip house (witch house?) comparable to Azealia Banks and Lizzo – a vibe no doubt influenced by the young artist’s Detroit roots. Second in her set was “Cheekbones”,  a brazen call to action for oral sex and A-1 kush which serves as the artist’s latest single from a forthcoming EP. After “Cheekbones”, Hopeadope revealed a layer of clothing to reveal a neon green leotard and brought a member of the crowd up for a bondage-laden lap dance. For the second-to-last song, Hopeadope stopped the number and brought another member of the crowd up to dance – wouldn’t you know it, that same black femme with blue hair. Two things cannot be overstated: one, the stage presence that Hopeadope carries even as a relative newcomer to Boston; and two, the artist’s physical prowess which enables her to twerk and throw it back while effortlessly rapping or belting. 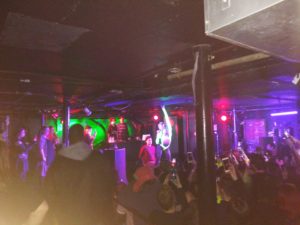 Hopeadope entices a fan during her set at CupcakKe at The Middle East Downstairs, 12/19/18. Photo credit Hassan Ghanny.

In tandem with Hopeadope was rapper, dancer, and hair guru Kweeng Doll (Boston), who whipped his Brazilian bundles up to the stage for a guest verse on a Hopeadope track. With Doll’s entrance the energy again shifted – perhaps with the advent of alcohol and/or Red Bull also kicking in – and the crowd was both hyping up and loosening up with every bar spat. But no one was prepared for “Run It”, Doll’s flipping of Missy Elliott’s record “Work It”, accompanied by a cabal of five backup dancers sporting matching fringe. Two of Doll’s numbers were all out twerk-fests, evoking the rhythm and atmosphere of a New Orleans bounce show with Doll shouting out his mentor, New Orleans bounce virtuoso Big Freedia. Doll was exuberant about his identity as a “queer, gay rapper”, and his bars are unapologetic in content in delivery: “I’m the type of f*ggot who’s bougie / and I do say excuse me.”

The surprise guest was none other than Boston’s own Harocaz, who performed a quick set of three songs. Harocaz was perfectly suited to follow the easy-going, body-positive dance vibes of Kweeng Doll, with both Hopeadope and event promoter Tiamarie (@heywhatsuphellno) shaking it out during Harocaz’s set. Kweeng Doll returned to the mic after Harocaz was through – perhaps to kill time, perhaps to amp up the crowd – with an all-out bacchanal of booty-popping between his backup dancers, Hopeadope, and lucky members of the crowd. The only questionable moment of the night was in this interim period when DJ Babygoat dropped “212” by Azealia Banks, a peculiarity given Banks’s digital assault on CupcakKe earlier in 2018. But the choice of music and dancing was perfectly suited for the crowd, and they ate it up.

When CupcakKe finally emerged, she was sporting an extravagant pink ombré afro over a Warhol-inspired, pop art print catsuit. With poise, she immediately launched into cult favorite “Vagina”, the crowd taking every opportunity to call-and-response throughout the song. CupcakKe commands the stage so expertly it’s hard to remember that she only turned 21 in May of this year. That poise is present even when she is performing blue: after remarking on the temperature in the room, CupcakKe nonchalantly announced to raucous applause: “I need some new towels, my p*ssy need to be wiped up!” CupcakKe hit two songs from earlier albums, the uplifting “Lgbt” and the ribald “Duck Duck Goose”, before launching into the opening track from Eden, “PetSmart”.

What CupcakKe and the organizers did with this concert, aside from putting on a good show, was unite and display a Boston that is not advertised or celebrated. Each artist brought something unique into the space: Slaughter and Amarga, the sadboy trap that soundtracks every basement in Allston; Hopeadope, the ingenue energy of Boston’s music schools that remains down with the nitty-gritty; Kweeng Doll and Harocaz, the fire of a local rap scene that, as WBUR’s Arielle Gray has detailed, is not dependent on patriarchal masculinity and male aggression; and CupcakKe herself, the distilled essence of talent that can bring together an audience of weird internet kids, rap heads, and geeked-out girls who dragged their boyfriends along all the same. CupcakKe’s show showed off a Boston that is desegregated, unpretentious, polyamorous, and radically gender-nonconforming, a vision of the city that is no doubt present but increasingly hard to find in 2018. 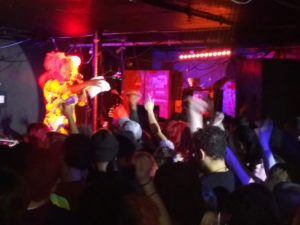 Now compare this to the opening lines of “Shave ‘Em Dry”, a blues song written in 1935:

“I got nipples on my titties, big as the end of my thumb
I got somethin’ between my legs’ll make a dead man come
Oh daddy, baby won’t you shave ’em dry?
Want you to grind me baby, grind me until I cry”

The musician who penned this song, a woman named Lucille Bogan who recorded under the name Bessie Jackson, is more like CupcakKe than might meet the eye. The two are both black woman musicians who record without being sexualized as people — yes, CupcakKe is hella cute, but her public image is not reliant on the male-gazey pinup iconography associated with women rappers like Lil’ Kim or Trina. They both were largely independent forces, with Bogan performing as a solo blues traveler in after-hours clubs and CupcakKe forging her way on a headlining tour to support Eden this year. Interestingly, they also both inject(ed) queerness into their music. Bogan recorded a song extolling lesbian women called “B.D. Woman’s Blues”, while CupcakKe’s breakout single in digital circles was literally named “Lgbt”.

The question remains, will CupcakKe’s legacy be as stubbornly subaltern as Bogan’s has proved to be for the mainstream?

Hassan Ghanny is a writer and music journalist based in Boston. He is the author of the essay collection SCORCHED RICE: Manifestos on Caribbean Diaspora Liberation. More of his writing can be found on Instagram @diaspora.gothic and Twitter @hassan_ghanny.