A new Boston based tape label! Thank goodness. It’s been too long since one of these popped up. Maybe it’s the facebook age but people used to start their own labels more I think even CD’R labels for crying out loud! Anyway ERASED! is one of a few new cats on the scene reporting on and putting out relevant players in the Boston DIY and underground music scenes and I was able to catch up with founder Jonathan Nankof for 5 questions about the latest endeavor plus I breakdown some of the first ERASED! artists below.

To my ear this particular label is giving us a healthy mix of music-school-trained and completely nihilistic weirdo music makers in the area. Both ends of the trained/untrained spectrum are important to us , as you hopefully have noticed we cover the highbrow and lowbrow alike around here and all the more special when its OUR PEOPLE making, recording, releasing and booking experimental music. Anyway introducing ERASED! Tapes. If you don’t make it to the end of this article at least make it to their show TONIGHT at Deep Thoughts featuring Spirit Level and Kevin Wynd. 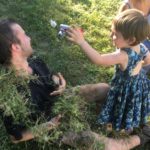 Boston Hassle: Just what do you think you are doing?
Jonathan Nankof: I am starting a damn tape label! I don’t know what the hell I am doing! But lots of people in Boston and beyond do and I wanna create a thing that can service their work and encourage the creation of more of it.

BH: Has this been a plan for a long time or a spontaneous endeavor?
JN: It was a plan that I had thought about for a while that I didn’t really take too seriously until recently. It was always an idea I liked but it took me being in a place where I thought it could really have a positive effect on the people around me and myself to consider it seriously.

BH: Any independent or even major labels that inspired you to start your own?
JN: Of course! Seeing the labels friends of mine run and the way those labels effect the community around them was essential to me starting my own. Lungbasket Recordings (Ethan Parcell, Alec Watson), Roto-Asterisk Records (Katie McShane), Pretty Purgatory (Peter McLaughlin) and Friendship Tapes (Andy Allen) are four that come to mind!

BH: What can we expect in 2018 from Erased!?
JN: You can definitely expect more tapes! From local favorites and hopefully some out-of-towners too. The first 5 are out already and I’ll tell ya that the 6th will be coming out in early February.

DINNER WITH THE DEVIL by SPIRIT LEVEL (playing TONIGHT at DEEP THOUGHTS!)
If RnB also stood for radical and bold Spirit Level would be RnB RnB. I guess they call it experimental power pop but the knockout vocal performance and arrangements of Adrienne Arditti soaring over the air-tight and super-smooth backbeat delivered by a local-allstar cast has me chanting DIY RNB DIY RNB over and over to myself in the show and while I’m driving my car. Anyway if you like catchy, impressive, radical, bold and interesting pop music I highly recommend you check this out. If you cant take a strong vocalist then best skip it. I nickname this EP Dinner with the Diva. Featuring members of Particulars, Custom Drummer. Peach Ring and probably more bands from this talent-rich pool of sweet people.

KEVIN WYND IS SECRET ROGER by KEVIN WYDN (playing TONIGHT at DEEP THOUGHTS!)
“Going To The Show” is my frickin anthem. Feels like I have known the song all my life AND makes me feel that fresh enthusiasm of someone who just discovered DIY shows. Somehow explains why Kevin Wynd sounds like time travel music to me.. cause it is! Dudes a very modest time-traveling pop weirdo! Ok maybe not, maybe its just that raw, retro, even, AM treatment he gives his exceptionally not-normal, highly engaging tunes. I personally rock that shit like a drug rug, Kevin Wynd has a bit more class than that. What I’m saying is that it’s good music and it SOUNDS good, know what I mean? Listen then! He even does a Neil Young cover for ya. A couple of these songs I believe were performed as Custom Drummer but hey I’m confusing musicians for scientists up here.. at least Crooked Arrow.. I love that jam

LIVE @ MAGNOLIA LOFT by JOHN CUSHING BIG BAND
It doesnt take a rocket scientist to recognize this as one special musical production. But it does take an extremely hard working musician (and NEC grad to boot) to put together a 20+ piece big band to play their original dreamy pop music in a DIY context. It’s pretty much hard in any context but seeing John play an all ages show at a church last month was just one special special thing that I was lucky enough to witness recently. Which is why I’m so gladed ERASED! Tapes is making it available to you. Please check it out and next time your at a local cafe having fun imaging that either the gal in line behind you or the dude behind the counter is one of the members of the John Cushing Big Band because it’s entirely possible, they’re everywhere.

LAVENDER TOWN by SHMOOP
Conceptual pop I guess. Billy McShane, the Captain himself of Boston’s Magic Band, Particulars, has obviously been up to some of his inexplicable music tricks again and it’s resulted in a strange, drum-machine-driven, sax-heavy but very light coneptual pop record called Lavender Town. Instead of throwing his bandmates down stairs Billy threw himself across the country knocking down at least 10 pins of adventure before popping up again. I actually dont know if he’s even here now I’m just guessing New York. Anyway take note, this freak cant help but create beautiful musical nonsense and I for one can’t stop consuming it so cheers to ERASED! for making a bandcamp for it at the very least.