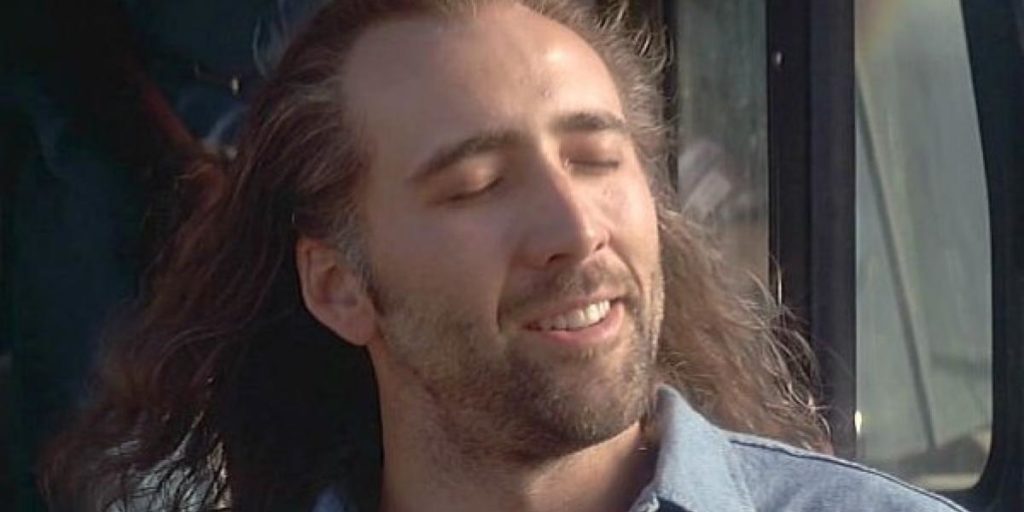 How did Nicolas Cage hide for so long?

I don’t mean from sight. The man has been a major movie star for my entire life, appearing in a long run of big-budget thrillers and Oscar-winning dramas. He won an Oscar in 1996, which didn’t seem the slightest bit odd at the time. Throughout the ‘90s and well into the 2000s, it was a given fact that Nicolas Cage was part of the Hollywood pantheon, no different from Julia Roberts or Bruce Willis. He almost played Superman, for god’s sake. He was just a Movie Star– capital M, capital S.

So, if Nicolas Cage was so famous, why did nobody notice that he was completely fucking nuts? And not even in a skeletons-in-the-closet way, like Mel Gibson or Tom Cruise– Cage’s eccentricity was right there on the screen the entire time, and somehow no one batted an eye, even while watching his certifiable turns in Zandalee or Deadfall. I loved his performances as an Elvis-impersonating David Lynch protagonist in Wild at Heart, a cockroach-eating vampire yuppie in Vampire’s Kiss, and twin avatars of screenwriter Charlie Kaufman in Adaptation, but somehow wrote these off as flukes in the career of an otherwise unremarkable Hollywood prettyboy. It wasn’t until his 2007 performance as a Carpenters-loving, flaming-skulled motorcycle daredevil superhero in Ghost Rider that I began to realize that something was up; the rest of the world caught on a few months later with his unintentionally astounding remake of The Wicker Man. Yet both of these films came out a full decade after Cage starred in two of the most deliriously unhinged action films ever to come out of the studio system. One of those is the immortal Face/Off, the John Woo-directed face-swap thriller in which, as a friend once put it, “John Travolta impersonates Nicolas Cage, and Nicolas Cage impersonates Nicolas Cage.” The other– which, arguably, paved the way for Cage’s career as an action star– is Con Air. 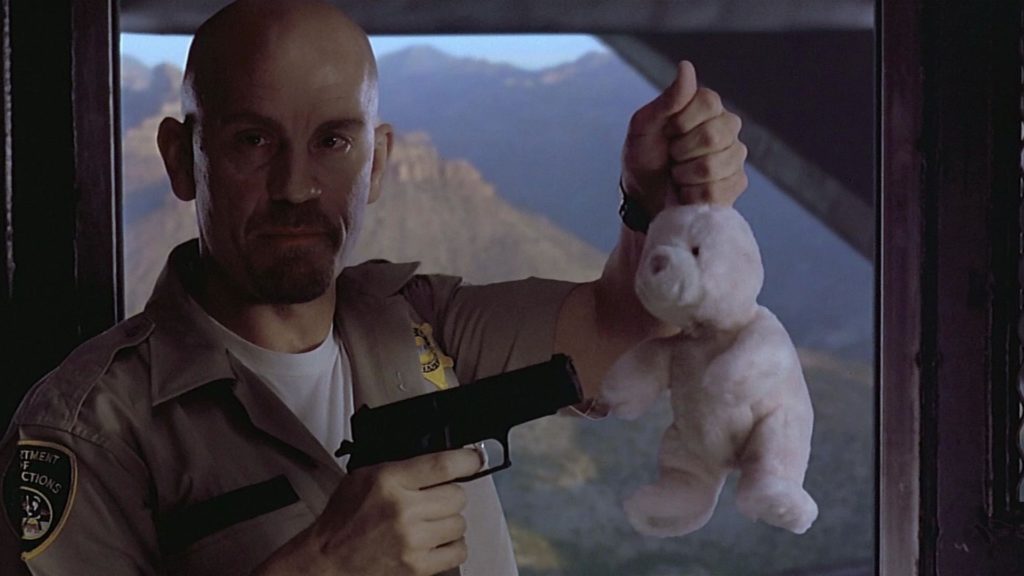 A smash hit upon its release, Con Air is now fondly remembered as the Expendables of manic, skeevy character actors. The outlandish plot, in which a maximum security prison makes the totally sound decision to transfer all of its most notorious prisoners on a single plane, is mostly an excuse to make a movie entirely out of the scene-stealing villains then de rigueur in big dumb action movies. In addition to Cage, the rogue’s gallery includes John Malkovich, Ving Rhames, Steve Buscemi, Danny Trejo, a shockingly young Dave Chappelle, and Nick Chinlund (who X-Files fans might remember from his recurring role as death-fetishist Donnie Pfaster). Rounding out the cast are lawmen Colm Meaney (O’Brien from Star Trek) and John Cusack (in the first of a puzzlingly vast procession of straightfaced action roles), but they don’t contribute much, and are probably only there because you can’t make a mainstream motion picture where every single character is a murderer, rapist, gang kingpin, or some combination thereof. Make no mistake: this movie’s raison d’etre is to drop a bunch of scenery-chewing praying mantises in a jar and shake it until they fight.

Which brings us to perhaps the most surprising thing about Con Air: for a paean to overacting starring Nicolas Cage, Nicolas Cage is… actually kinda normal. Sure, his hair extensions are beyond ludicrous, and his character is improbably named “Cameron Poe,” but Cage himself manages to rein himself in to play a fairly standard action hero. To be fair, even a full-on Cage freakout might have difficulty elbowing for room between Malkovich (who spends the majority of the movie literally hissing) and Buscemi (whose character arc could be described as “will he/won’t he kill and eat a little girl on camera”), but he doesn’t even try: in a movie where the entire cast zigs into madness, Cage maintains a stoic zag. Perhaps that’s how he flew under the radar for the decade between his Oscar win and his encounter with the bees: he began his “action” phase playing straightman-by-default.

But don’t let that fool you: Con Air is certifiably bugfuck insane, and even if Cage seems to be on his meds that week, the rest of the cast more than makes up for it. Each member of its ensemble is the sort of actor who can be relied on to elevate a movie for at least a few minutes, and each is given far more screentime than they’re usually afforded. It’s the rare film that works both as an entertainingly sleazy wallow in the worst of humanity, and a feel-good blow-em-up popcorn movie. Con Air is crazy enough that it made Nicolas Cage look normal– and now that his cover is blown, it feels even crazier.