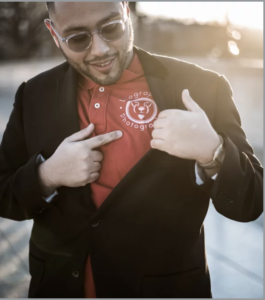 It is all too often that we find ourselves forced to move on mere weeks after a major tragedy. Sometimes it only takes days before the 24-hour news cycle finds a new outrage with which to divert our attention.  Sometimes facts are underreported, or they’re skewed to fit a certain agenda, or they’re left out to make the folks-in-charge seem like the good guys.  Sometimes we abandon the cause because of its magnitude- what can we do in the face of a mighty act of nature? It’s hard to get a full picture of a large-scale emergency without eventually letting go, and moving on to other things- but that doesn’t mean the damage goes away.

Nowhere were the above phenomena more evident than in last year’s devastating Hurricane Maria that devastated the island of Puerto Rico.  It is the spirit of remembrance and truth-telling that inspired Leonardo Claudio, Jr, a Brooklynite photographer and owner of Leographic Photography, a small media production company.  (Also, Leo’s a former local-slash-DAP patron-slash-designated photographer for Oompa…)

Leo’s latest project, a documentary titled “Maria Se Fue”, will be filmed in Puerto Rico and will feature several families on the island who have survived the devastation.  Leo’s goal is to visit the country’s 78 pueblos, or municipalities, in order to fully encapsulate the spirit of the nation after such a destructive event.

“This project is not about me” he says in his crowdfunding video. “It’s not about fame. It’s about truth.”

In order for Leo to complete his project successfully, he needs help from us, his former community. Funds will not only help him and his team get to Puerto Rico, but also distributed to the featured families as post-disaster aid.  Leo is also looking for contacts in Puerto Rico who can help him with this undertaking.  Finally, getting the word out on social media either by linking the video below is the best way to get the word out to as many people as possible.

Nobody likes to think that there’s nothing they can do to help, that they’re powerless against the greater forces of indifference and politic.  We know we can do better.  Leo has already begun to do what’s in his power to raise the voices of the people of Puerto Rico- by helping him, you’ll be helping them, too.