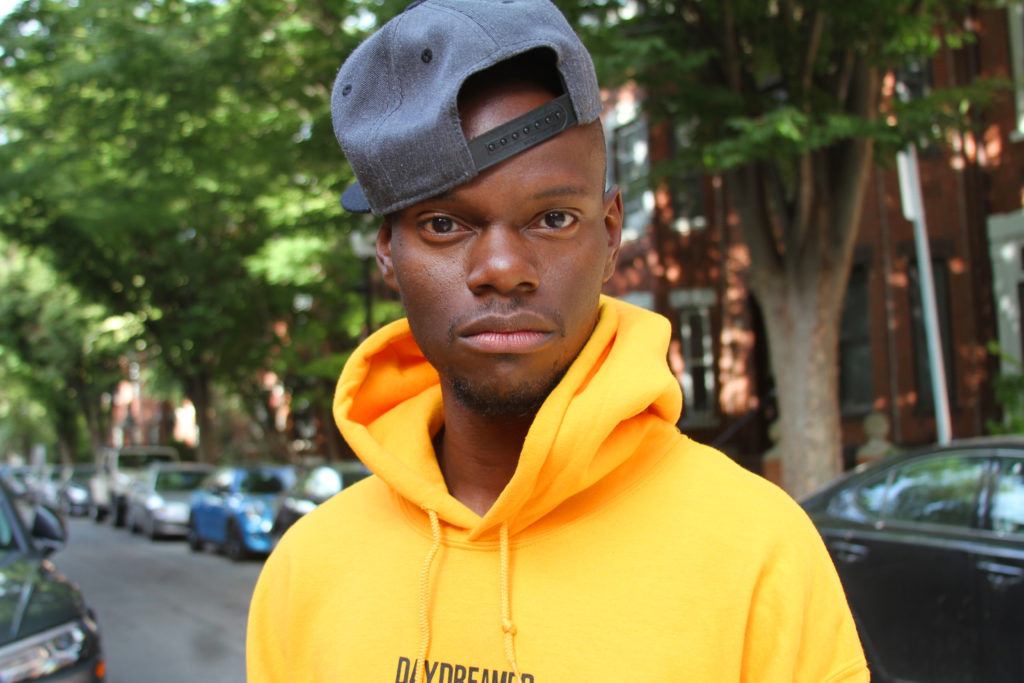 In Boston, a city that loves to paint itself as a progressive utopia of equal acceptance, opportunity, and support, it always feels good to come across someone who rejects those notions in favor of a more complicated truth. It’s especially nice when that someone has found a way to pick apart these truths so succinctly and enjoyably. Artist, actor, performer, and activist Tory Bullock makes videos that address a range of very serious topics including racism, classism, gentrification, performative action under the guise of alliance, and the politics of politics. His videos are funny and intimate self- documents that primarily feature him talking directly to the camera, making hard eye-contact with the lens and the viewer. Often the videos cut away to footage directly related to what he’s talking about, or a superimposed animation will appear next to him as if he’s the host of a PBS kid’s show. Sometimes, old professional wrestling music or some other memory from a millennial childhood plays satirically in the background.

Bullock has been a strong creative presence and community advocate for at least a decade. I first met him ten years ago when he put together a film festival featuring work by local directors. The discomfort his own videos are meant to cause those who avert their eyes from the problems he dissects is what makes his on-screen persona work so well. He usually begins with the tone of a friendly teacher, upbeat and ready to deliver useful information. But his annoyance at having to explain these things, to break them down into basics for people who should, and probably do, know better, comes through quickly. You’re left to either get angry, laugh nervously, or feel stupid, depending on where you stand. But always the point is clear and is driven home through quick and witty jabs at his targets: Boston political hacks, douchey celebrities, and phony allies.

Bullock cites the directness he is able to achieve in these videos as the primary reason for working this way. His videos are an attempt at communicating with the viewer without pretense or the pressure of respectability politics. He considers these communications in direct contrast to the way political communication is done, which is with disingenuous ulterior motives. Bullock sees politics as being about making deals and career-building, not actually advocating for the people served. He believes more creative people, more marginalized people, and more people affected by these “deals” need more than just a seat at the table. They need power.

Inclusion is important, no doubt, but is often done as a public gesture, for optics that distract from real issues. A resistance to this sort of performative action is at the heart of what Tory Bullock does. Social engagement that happens only on the terms of those in power is useless placation at best. Politicians, corporations, creative institutions, and arts councils alike are happy to use their public decries of love and inclusivity as a form of social currency, but do they really follow through with these values when it actually matters? Most often, the answer is no, and it is with a rigorous passion that Bullock cannot forget this.

Thankfully for Boston, he is a force to be reckoned with, and his social and political concerns extend seamlessly from creative output to direct action and activism. Last year, after leading a campaign to remove the “Emancipation Memorial”, which features a nearly nude black man(“an emancipated slave”) kneeling before an omnipotent Abraham Lincoln as a supposed depiction of freedom, the racist statue was taken down from its Park Square location. Like most moments of progressive cultural reckoning, it was met with whines about censorship and erasure of history. But none of Bullock’s work exists outside the realm of controversy, and that is why it’s so important for the city. It challenges the powerful and champions the overlooked.

While he didn’t disclose any upcoming projects, because he likes to let the inspiration and issues speak to him in the moment, Tory Bullock is interested in changing up his approach to working. The pandemic has allowed him to slow down a bit, not because things are any less dire, but because time and thoughtfulness are at least as precious as being prolific. One can only hope the work he’s done over the last several years is just him getting warmed up. If his sharp critiques and tireless advocacy are any indication, Boston cronies will be kept more honest than they’d otherwise be for years to come.