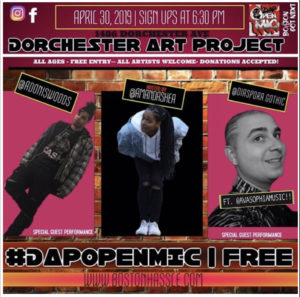 Boston artist, novelist, and music journalist Hassan Ghanny and singer/songwriter Ava Sophia are bringing their new collaborative show, COLOR THEORY, to DAP. A lyrical essay by Ghanny featuring extended musical interludes by Sophia, the performance delves into the complexity and chaos implicit to the lives of people of color. Of the performance, Ghanny says he’s “doing it for [his] generation,” stating that he wants to help “people who are also trying to articulate these things, or to understand these things.”

Ghanny says the unique multimedia format of the show helps to accomplish that. He believes that most people in any given audience are better at processing different kinds of information, “orally or interactively or kinesthetically,” and wants to create a space that is open to all of them, saying that “accessibility is an important tenant.” When working on each individual component of the performance, the questions was always “how to make something that is very cerebral, or very grounded in specific emotions accessible to someone who has no idea what’s going on in my head.”

On the collaboration with Ava Sophia, Ghanny was eager to note the role she had in actualizing the ideas he presented, and bringing it all to life. “It’s really humbling for me to have approached Ava with this vague idea of something I want to do, and for her to be able to really run with that and turn it into something that exists, and is now this amazing show we’re both very proud of.” Her covers of songs by Janelle Monae, Ibeyi, City High, and more help to tie together the various thematic elements of the show, grounding each poetic concept or lyrical motif in a consistent, R&B-infused sonic landscape.

The show takes place on April 30th at Dorchester Art Project. You can find clips from Ghanny and Sophia’s recent performance above. You can find more of Hassan’s work right here in the Hassle, to which he is a frequent contributor, as well as in his collection of essays Scorched Rice, available now as an E-book. Ava Sophia’s music is streaming on Spotify, and her debut EP is expected out soon.

DAP Open Mics are the last Tuesdays of the month.  Catch the April open mic from 6:30-9:30 in the theater!

THE COPS DON’T WANT YOU TO READ THIS

(it's about defunding the BPD)